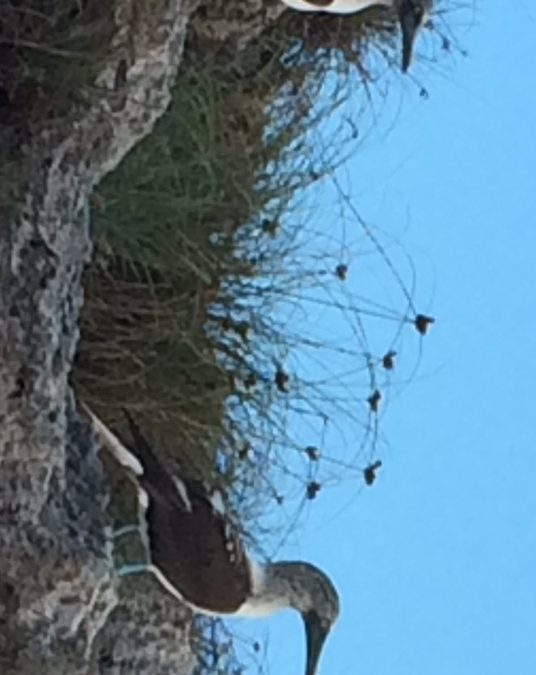 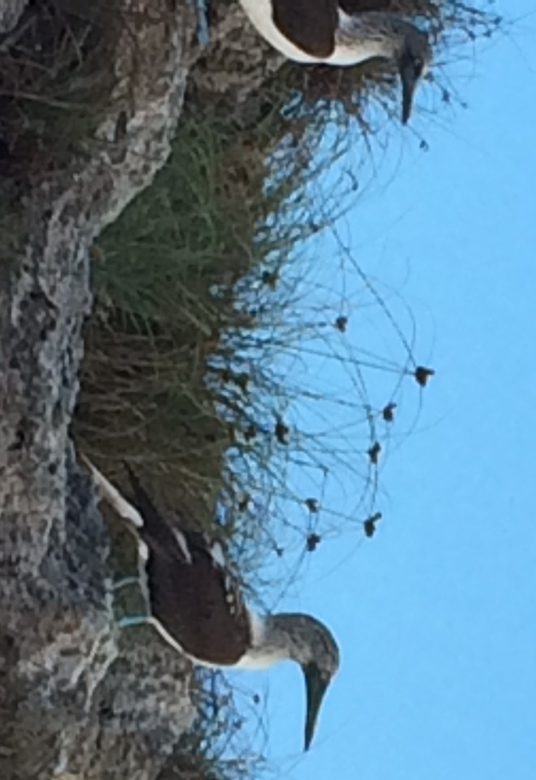 A pair of Blue-Footed Boobies spotted near San Blas

RIVIERA NAYARIT, Mexico (DAY 5) — How many birds can you count?

Different species of birds… on a good day, 120 species, says our naturalist guide Francisco Nombre, who happens to hold Mexico’s title this year for seeing the most different species in a 24 hour period.

People come to San Blas in the Riviera Nayarit from all over the world to see birds—as well as to surf the famous breaks.  We are in a boat, mangroves on either side in La Tovara National Park where we see Tropical Kingbird, magnificent Frigate Birds, White Ibis,  Cattle Egret, Green Heron, the Rufous-bellied Chachalaca, hummingbirds, the Great Kiskadee… the list goes on and on. The birder in our group is thrilled. The rest of us are having a good time too—also checking out the crocs in the water!

But how do you get kids interested? I ask Francisco, the father of an eight year-old and five year-old.  Forget the binoculars, he says—they can make it harder for kids to spot the birds.  A scope is easier.  Also it helps if you have a fun fact or two about the birds you are seeing.  Did you know this bird dies of a broken heart after his mate dies? Did you know the Boat Billed Heron is so named because his beak looks like an upside down boat?

And then there are contests. How many different species do you see?  How many colors can you count on the birds—yellow, red, black, white, green?  How many birds with red beaks do you see?

Within 45 miles of San Blas along the Pacific Coast in Riviera Nayarit there are 500 species of birds. Check out the giant termite nest, the male bird sitting on the nest, the cinnamon hummingbird, the white tipped Dove. Did you know they care for the baby birds as a whole community?

Most of the birds here are native to the region though there are many who migrate here in the winter when most of the birders come, staying in hotels like the 45-room Garza Canela, owned by the same family and run now by four sisters and a brother.   One sister, Betty Vazquez Gonzalez, is one of the best known chefs in Mexico—a reason their Restaurant El Delfin is so well known and respected.

“It’s not always easy working as a family,” says 55 year-old Doris, who explains the hotel first was an eight-room inn run by an uncle. When he wanted to sell, her father, a book store owner, bought it “because San Blas was always our place…where we came to the beach,” she explained. 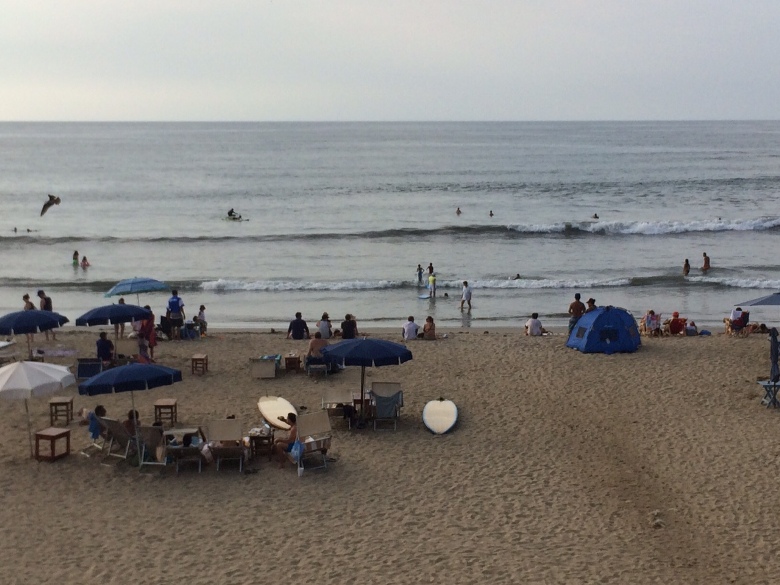 The mangos we are served at breakfast are just off the trees in her mother’s garden—the guava jam is made with their guavas, the fish is seasoned with the herbs they grow—the eggs from the chickens.  I love that besides a pool, there is a playground for the kids.  Maybe that’s why now third and even fourth generations find this place.  “We have many, many families,” Doris says.

Of course staying in San Blas is a totally different trip than at an all inclusive.  It’s about as local and authentic as you can get.  We see Huichol Indians in colorful costume who have been to an island that is sacred to them.  We see many Mexican families on the beach.  We use hot sauce made in this state and drink Local Tequila and Mexican wine.  For breakfast we eat Migas and Chilaquiles; for dinner: freshly made ceviche and fish followed by homemade ginger ice cream and coconut flan. There is a chapel on the property.  And a shop selling beautiful things from all over Mexico.

“San Blas is a very friendly town used to tourists,” Doris says.  Birders, after all, have been coming here since the 1950s.  This isn’t a town like some off the major tourist track where locals might look at you funny.  It’s also safe enough for teens to go to the town square on their own.

“Kids use technology so much,” says Nunoz.  “Activities here—at the beach, birding, it gets them away from the screens.  The challenge is keeping their attention! “ 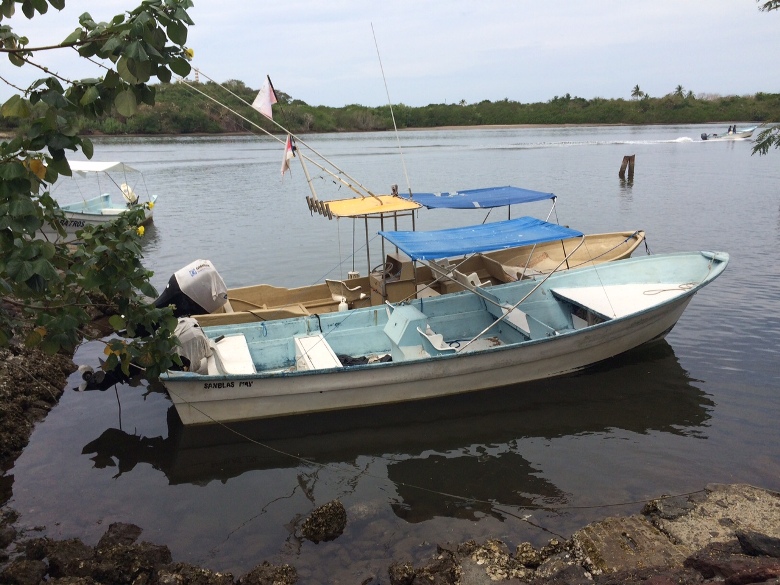 But it’s not difficult here.  There is an old fort to explore (San Blas was founded in the 17th Century and was the most important shipyard on the pacific Coast). There is a crumbling church and ruins of an old custom house. The remains of Our Lady of the Rosary, “The Seafarer” was founded around 1760.  Read Henry Longfellow’s poem “The Bells of St. Blas” to the kids— it talked about the famous bronze bells here.

Take a surfing lesson or go fishing.  Locals say there is terrific deep sea fishing here.   We eat local snapper, shrimp and mahi mahi. Come in winter to see the humpback whales an—this is where they have their babies

At La Tovara, the kids will like the baby crocodiles being cared for  in a kind of croc nursery just outside.

When you are in town like San Blas or other smaller towns in this region like Saylita or San Francisco (nicknamed “San Pancho”) you realize how much you are missing if you never leave your all-inclusive resort.  You could be sitting on the beach with Mexican families at the next table  eating  shrimp fajitas or a local dish Aqua Chile—fish and shrimp with lime and different kind of chilies. It’ s spicy! You might also be biking through town, followed by a bottle of beer brought to you in a bucket. 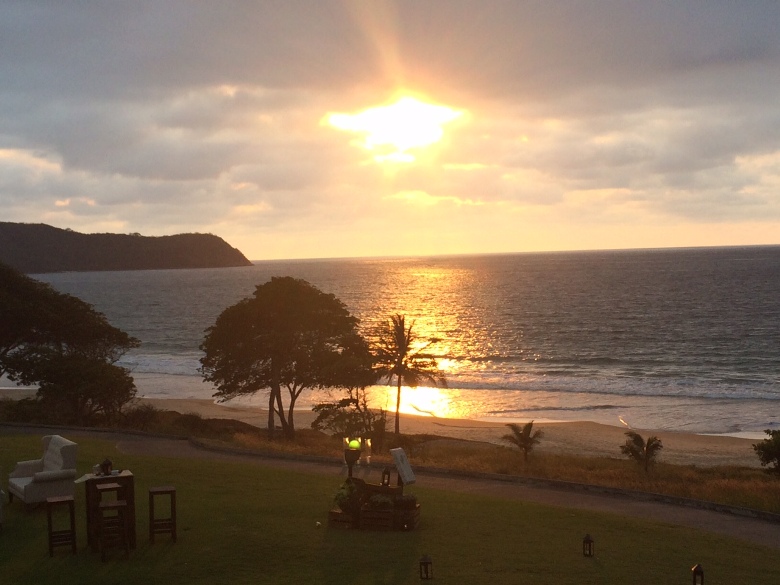 San Blas is farther but towns like Sayalita and San Pancho are less than an hour from Puerto Vallarta—20 minutes from Riviera Nayarit resorts like Iberostar Playa Mita and the Four Seasons.

Angela Contreres says her restaurant Las Palmas in San Pancho was started by her mother 42 years ago.  “Just a half dozen tables under a thatched palapa,” she said.  It’s now five times the size and her two sons, in their 20s, are the chefs.

Is there a better place to watch the sunset?