A cruise with a difference — along the Seine in Normandy 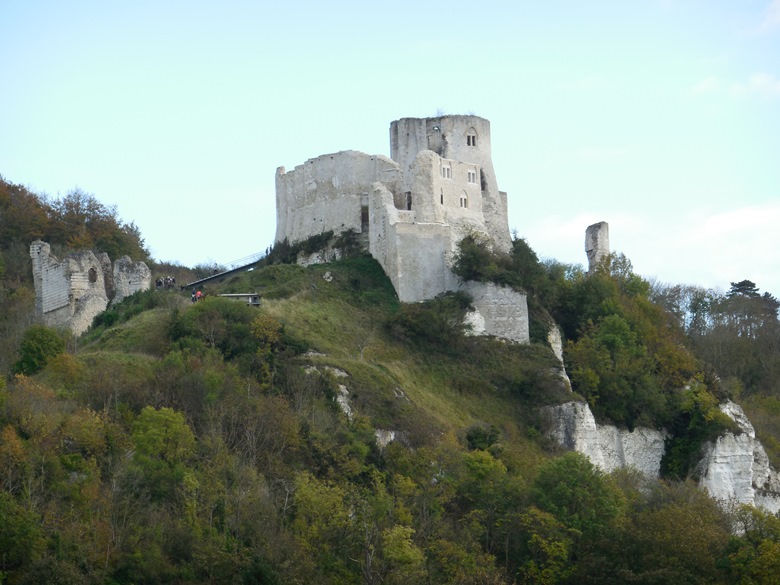 DAY 6 – ON THE SEINE RIVER BETWEEN PARIS AND NORMANDY — We’re gliding along a field dotted with daisies; at lunch I watched a family of swans.

I’m on a different kind of cruise—a River Cruise on the Seine in France on Avalon Waterways Creativity—just 140 passengers on this 361-foot long barge and with just 70 staterooms and two suites.  (The newest Avalon ships will be all-suites.)

“You get to know people here… and it’s nice that you unpack for a whole week,” said Ming Chow, here on her first river cruise with her husband Richard Rogers from Gainesville, Fla.  “I would definitely do it again.”

The only drawback—there just isn’t enough time on the excursions to see all the couple wants. They would have liked more time in the famous Norman town of Honfleur, for example.

MJ Alibston and her friend Bobbi Schamel, from Huntington, NY are cruising with 16 of their friends from an over-50 ski club. “The guides have been great,” said MJ.

But definitely this is an older crowd—with people well into their 80s though there are a good numbers of us baby boomers on board  and even a 23 year old traveling with his mom. “I’m having a good time,” said Sean Young.  “I get along better with adults anyway,” he joked.

River Cruising is fast growing and it is easy to see why—no crowds on board and the chance to literally see the world go by—in our case a bit of France as we cruise from Paris to Normandy.  We met at a hotel in Paris and were shuttled to the Seine where the boat was waiting, the crew smiling as we boarded.

The state rooms are larger than I thought they’d be—likely because I learn they are 15 per cent larger than the industry average.  I love our floor to ceiling windows that lets me watch France go by.  Avalon Waterways was launched in 2003 by the Globus family of brands that has been in business since the founder Antonio Mantegazza used his rowboat to transport goods across Lake Lugano and decided to start a company transporting tourists.

The crowd skews older and from around the world but are largely English speaking—from the USA, Canada, New Zealand,   As often happens on these trips, we meet people who live near our home.  For some, it is their first river cruise, others have done rivers in other parts of Europe.

The pace is relaxed.  There is a big buffet breakfast—eggs to  order, blue berry pancakes, fruits, sausages, hams—and then we go off on excursions –our first to Giverny, Monet’s home or the Chateau de Bizy.  I like that the excursions are included.

“What’s not to like,” says Lois Robbins, from upstate New York who has been on several  Avalon river cruises and has organized this trip for 16 members  of her 50+ ski club. “The food is good. The tours are good.  I’ve never heard any complaints.”

After we tour Giverny, we have the choice of a big multi course lunch or sandwiches and soups upstairs in the lounge with its panoramic windows. This being France the soup and sandwiches and salad are just right, though we’re disappointed they’ve postponed the French Crepes on deck because it is too windy.

Later, we will stop at Les Andelys, where we can walk up to the Chateau Gaillard, the home of Richard the Lion Hearted.   Gaillard means strong and fearless and the castle up on a hill was supposed to be impregnable.  Built in the 12th century Richard, we learn, never saw his castle completed because he was killed by an enemy.

There are wine lectures –and tastings of course — pastry making demonstrations and the chance, for a few days, to simply enjoy watching the world go by, making new friends in the process.

“I’m loving this,” said Lauren Bartz, a marketing consultant here with her husband Steven on her first trip to Europe.  With two kids in college, they’re younger than a lot of the other cruisers but she says she’s enjoying getting to meet these older, seasoned travelers.

Each day, there are included tours and special activities like macron baking demonstration from Chef Julien Veniel, who owns a patisserie in the town of Vernon.

Yvette Laurent, the cruise director, who is a veteran of 16 years of river cruising, says this “culinary cruise” is new.  Ready to learn to make a French Macron?