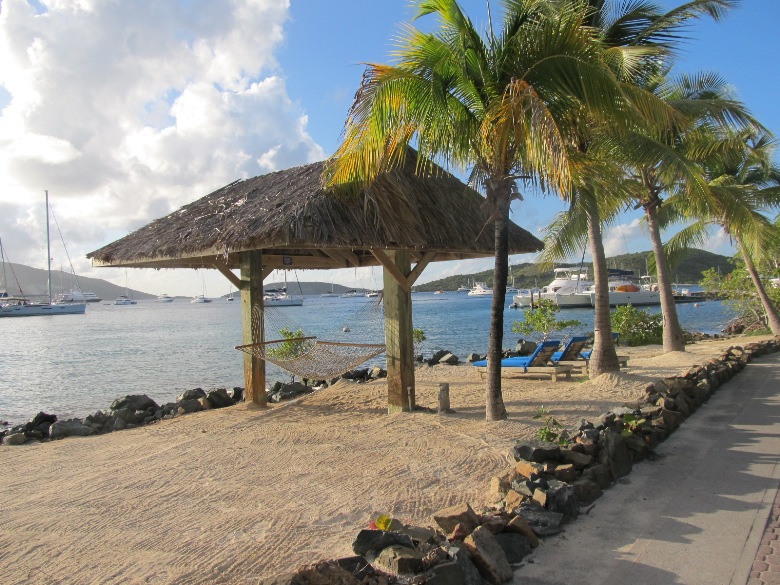 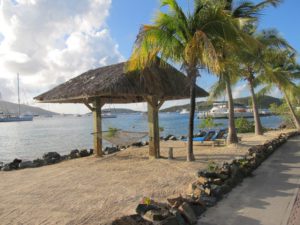 We’re at the Bitter End Yacht Club on the island of Virgin Gorda  which has been a haven for sailors and yachters for years.

We’ve stopped for two nights and a day—like many sailing here—to relax and enjoy all of the activities we can’t do aboard our Moorings charter catamaran — lounging at the pool, going to the spa, paddle boarding and windsurfing  — and for some die-hards, watching football at the pub.

The place is so popular with sailors and yachts—there are several well over 100-feet long berthed right near our modest catamaran. “Some people don’t even know we have rooms here,” says resort manager Mary Jo Ryan as she shows me one with a spectacular view over North Sound on Virgin Gorda in the British Virgin Islands.  I wish I could just stretch out in the hammock on the wrap around deck right here.

There are 86 rooms but more people come via yacht and sail boat—the resort is only reachable by water and there are 70 mooring balls as well as more than 20 slips in the brand new Quarter Deck Marina, with water and electrical hook ups . Last night, our neighbor was a racing boat whose owners are from South Africa.

This place was started by the Hokins family in the 1970s as a family retreat. Chicagoan Dana Hokin, the third generation to run Bitter End, calls it the best and “safest place to beach comb, learn to snail, snorkel or perfect one’s high performance skills.” It boasts one of the largest resort fleets of boats, dinghies, windsurfing gear, kayaks and its own sailing school for kids as well as adults. The resort stretches along a mile of waterfront on the North Sound—the most protected and secluded deep water harbor in the Caribbean.

The resort, Hokin says, has been “green before green had a name.” In fact this year, it has won the British Virgin Islands resort for being the islands’ greenest.

We  planned to stop in  just for a night on our weeklong sojourn on our sailboat but opted to stay a second night so that we could “play” as well as relax after all of the sailing and diving we’ve been doing in these pristine waters all week. 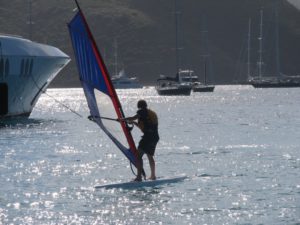 That’s pretty typical I learn.  If you are staying there is a kids’ camp that is part of the package as well as plenty of learn to sail programs.   More than half the guests have been here be3fore—a couple who got married here this past weekend with 70 guests had been here several times. That’s not uncommon. “We have a lot of third generations. It’s amazing to see,” says General Manager Mo Sallah. And there are plenty of people around to help—with a staff of 200, the ratio of staff to guest is a bit more than 1-1.

It’s a veritable village for sailors with everything from boat repair, shopping, restaurants (many come for the Tuesday night West Indian Beach BBQ and the Friday Night Seafood Buffet) even movies screened nightly.

But this place isn’t like a traditional luxury resort.   There is no TV or Wi-Fi in the rooms. While some of the rooms have been newly updated complete with Teak furnishings, others are decidedly dated. But that’s a small price to pay for the killer views (the rooms are all in cottages up high from the beach).

The idea is to get out on and around the water—there are 100 different water craft–that’s why the activities and meals are all part of the package. “If you want a place like the Four Seasons, this isn’t it,” says Sallah, unapologetically.  There are excursions to Anegada, to scuba dive, and to the Baths, the BVI’s famous natural rock grottos

Sallah looks out at the view of the sailboats, the turquoise water and the mega yachts.  “That’s why it takes two planes and a boat to get here….You don’t have a view lie this many places,” he says.

Families are at least half the business—and that includes those with grown kids like mine who are happy to try all the water toys.  I love the no muss no fuss aspect of the place. We are docked rather than moored—more expensive but easier which means we can just hop off the boat to get ice, to take a real shower, to buy eggs for breakfast or watch the football game at the Pub on Monday night rather than taking the dinghy,

We can also indulge in other vacation pastimes—like taking a snooze by the pool, hiking along the walking trails that lead up to some of the best views of the island or trying windsurfing as my and kids are doing.  We opt for a snorkeling trip in the morning that proves among the best we’ve experienced the entire trip.

OF course this place isn’t cheap—weeklong packages for a family of four in two rooms start at just under $8900 including meals , daily unlimited use of the club fleet, snorkeling trips, sailing 101 course and more—probably about the same as you’d pay at a more traditional all inclusive. Summer season, which starts in mid April is nearly $2000 less.

This place isn’t for you if you want to lay on the beach all day. “This resort is for people who want to be in and around the water,” says Mo Sallah, “The essence is that you are with nature—that’s what makes us unique.”

We hate to leave.