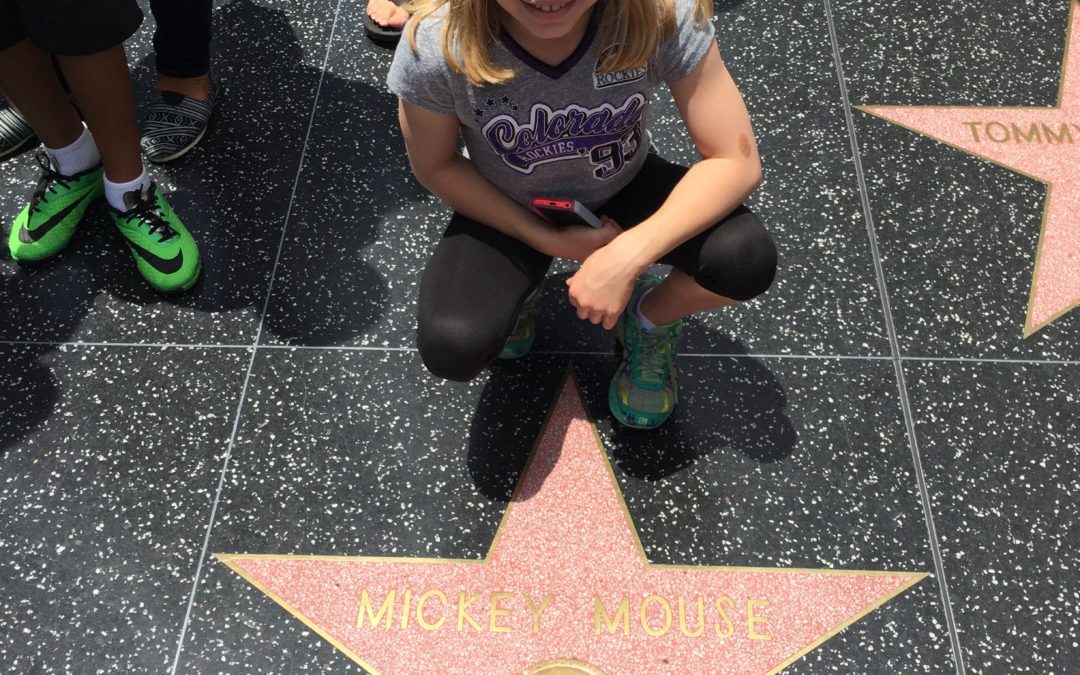 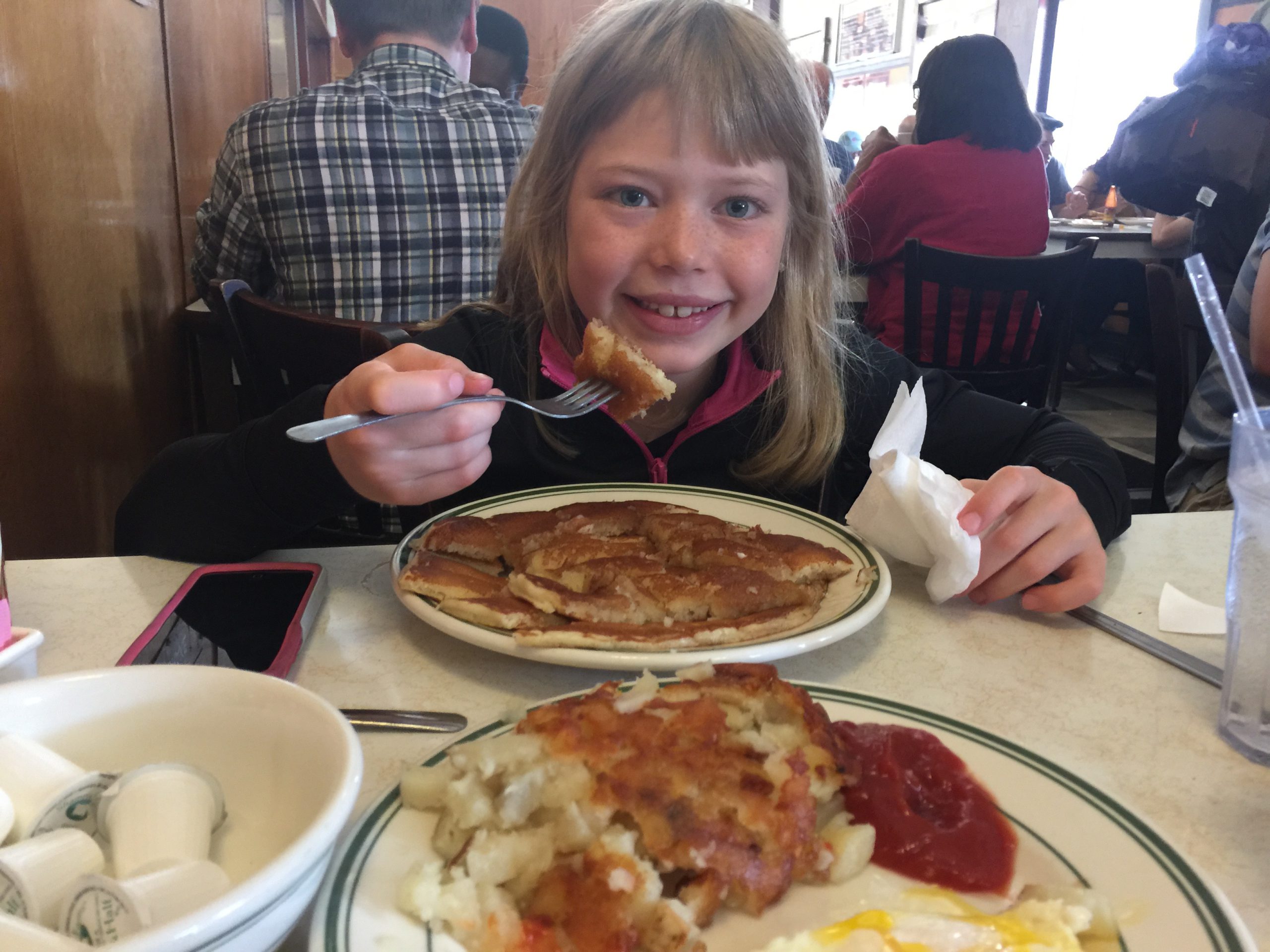 On the first day when we flew in, we decided to go up to Hollywood and walk around all of the famous places.  But first, I was STARVING from the early morning plane ride, so my dad took me to this little place he had been to when he comes to Los Angeles on business. It is called the Original Pantry in downtown. I like it because it didn’t take them long to get our order and food. They’re fast and I loved, loved, loved their pancakes. My dad likes the price!  He said it’s a good spot because it’s near the convention center and the Staples Center where pro sports teams and concerts are.

After we ate, I wanted to go walk and see the Hollywood Stars.  I had only heard of them but never had seen them.  Some of my favorites were Mickey Mouse, Walt Disney, Marilyn Monroe, and Christina Aguilera.  We also went to Ripley’s Believe it or Not, a wax museum, and also this place called Guinness Museum World Records.  All of these stores had wacky cool stuff and I had a lot of fun walking around and learning with my daddy.  We grabbed a yummy ice cream at the Ghirardelli Soda Fountain before heading to get checked into our hotel. 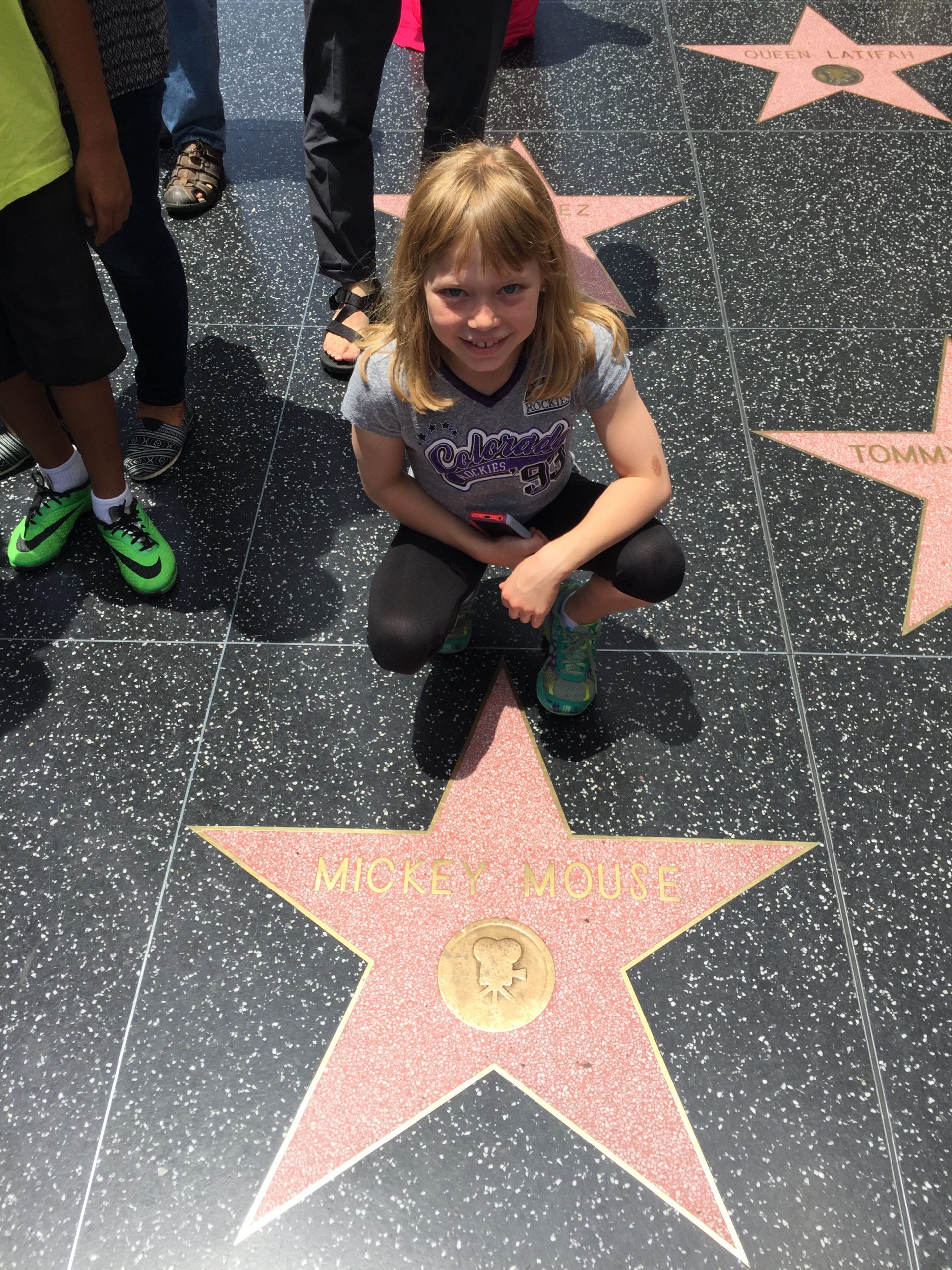 We got unpacked and headed out to see the Anaheim Angels play the Detroit Tigers play baseball.  I love going to the baseball games with my dad.  We had a lot of fun, but my dad wanted me to get a good night sleep before our first big day at Disneyland, so we left the game a little bit early.

I was sooo excited to go on the rides at Disneyland – especially since they are celebrating their 60th Anniversary Diamond Celebration.  It had been about 6 years or so my dad thinks since I had been to Disneyland.  I knew from being at Disneyworld recently that I was tall enough for Space Mountain, and once we got into the park, that was the first ride I wanted to go on.  But, the line was short at the Star Wars ride, so we went in there first.  We didn’t stop all day.  We hit all of the rides, from Space Mountain (3 times!) to Indiana Jones Adventure (twice, but the line was long) to the Matterhorn Bobsleds (which I had never been on, and the Yeti scared me the first time, but I love, love, loved it when I rode it again and again). 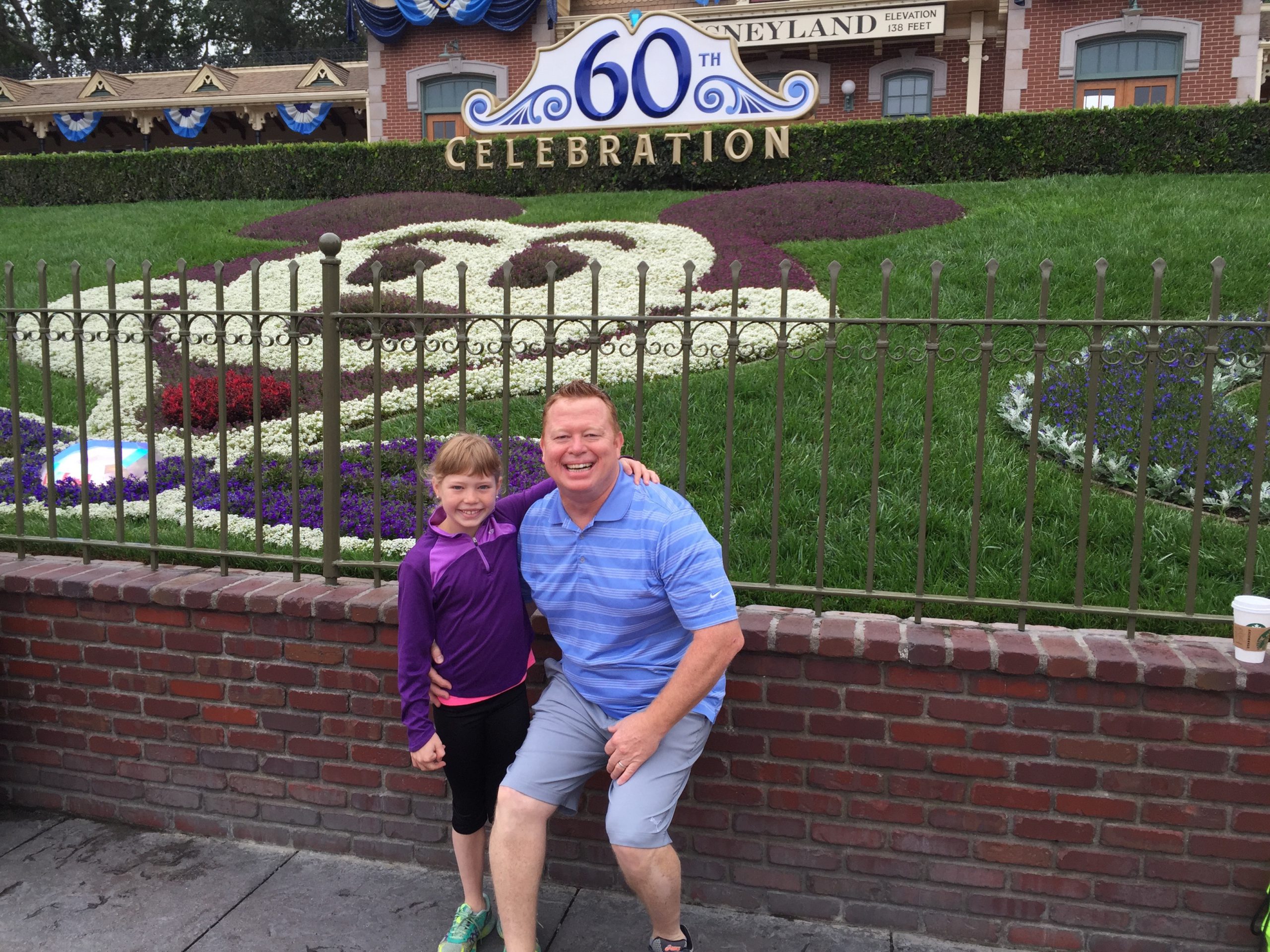 Hannah and Mike at Disneyland

Since I was now double-digits old (I’m 10) I told my dad that I wanted to ride the big kid rides more this time.  My dad loves to go on these rides with me (my mom, not so much) and he also helped me to get all of our Fast Passes. These help when the lines are long and you want to ride a ride a couple of times, plus, I get a little bored standing in line.

Since I am in competitive gymnastics, I try to eat good food as much as I can.  We looked around and found the French Market Restaurant in New Orleans Square that has hand tossed salads, so we went there for a late lunch.  We tried to eat when it wasn’t so busy so that I could go on as many rides as possible.  After lunch, we went to see this cute show called Mickey and the Magical Map.  It was really fun, and was good to get out of the sun and rest for a little bit.

We went on more and more rides, and stopped to get a Dole Pineapple Whip – my first one ever and it was soooo good!  I had a little bit of a sore throat, so it made it feel better.  We ate that night at Café Orleans and I had a yummy chicken crepe.  My brother would be jealous because he loves crepes! I was getting tired by the end of the night but knew that the Paint The Night parade would wake me up (it’s part of their 60th Anniversary Diamond Celebration). It was unbelievable!!! I’ve never seen a parade and fireworks like it before in my life. And I was amazed that they do this parade EVERY NIGHT!!  I liked that they said during the parade that Disneyland will never be complete as long as people still have an imagination.

We still had one more big thing to do tonight – even though I was getting tired – so we grabbed a hot chocolate at the Starbucks on Main Street (they wrote Princess Hannah on my cup! So cool) and went to get our seats for Fantasmic!  I fell asleep in my dads lap for a little bit before the show, but he woke me up in time to watch the show.  It was really cool with fire and a water show – I highly recommend this show and the parade.  It was time to head home and rest.  I can’t wait for my day tomorrow at Disney’s California Adventure.

I was a bit tired from my big day yesterday, so my dad let me sleep in a little bit.  We still got to California Adventure around 9:30 and we headed right back to Radiator Springs Racers to see how long the line was and to get our Fast Pass.  The line wasn’t too long (about 35 minutes) but my dad was mad because he didn’t know that the Fast Pass for the ride were given out at the entrance of Bugs Land.  So we missed out getting a good Fast Pass time to re-ride Racers.  I like this ride because it feels like I am in the Cars movies.  My dad let me sit in the drivers seat, so I felt like I was the one driving and racing the other car.  It was sooo much fun! 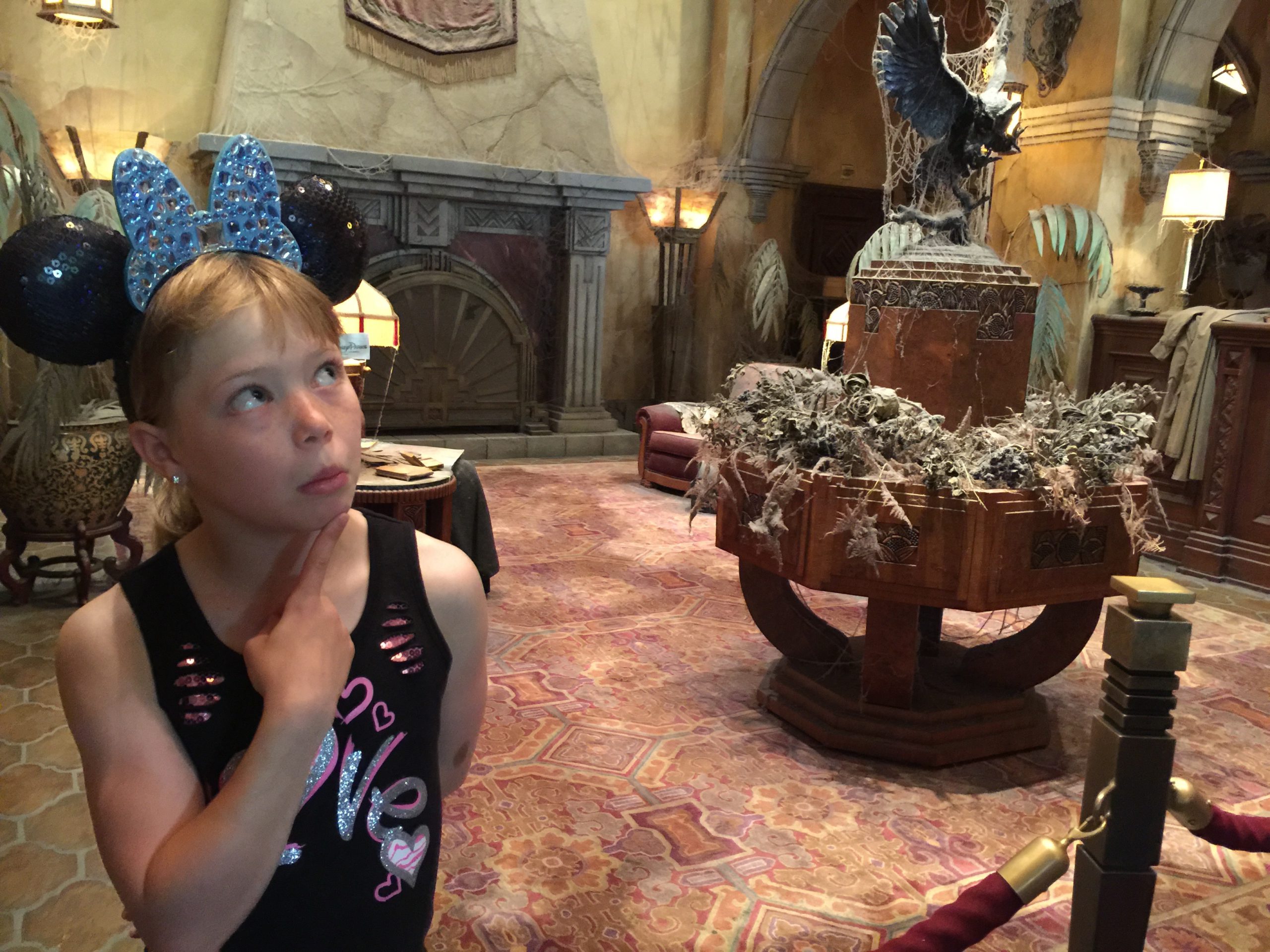 We went over to Hollywood Land to check out the line for Hollywood Tower of Terror.  I love that ride!  It gets my tummy every time!  The line was really short so we went on it two times in a row.  I was really excited to go on the big kid roller coaster called California Scream, so we headed over there for some riding.  On the way over, we made sure we got a Radiator Springs Racers Fast Pass and my daddy needed some coffee, so we stopped to get a quick snack.  The line wasn’t too long at the roller coaster (about 20 minutes) so we went on it a couple of times.  It was sooo much fun and a little scary the first time, but I loved it!

We went on all of the rides in Paradise Pier and snacked on some energy bars my dad had brought with us into the park.  We knew that we wanted to go see Disney’s Aladdin show in the afternoon so we headed over to Hollywood Land.  The show is in this really big theater (my dad said it was called the Hyperion Theater) and we got there about 30 minutes before the show so that we would get good seats.  The show was a ton of fun and the actors came out into the crowd, including this big elephant!  My most favorite actor was the guy who played the genie Aladdin.  He cracked a lot of funny jokes that made me laugh out loud and made the show fun.  I got some rest for my feet and legs during the show which helped me get more energy.  I was bummed though because I couldn’t eat my popcorn during the show because they don’t allow food and drink inside the theater.

Afterward, we did the rides and shows in Hollywood Land and headed over to catch the Pixar Parade (I love all of the Pixar characters, and it was fun seeing them up close in the parade) before heading to Grizzly Peak for the log ride and Soarin’ Over California.  My dad is so smart because he packed us ponchos from one of our other trips to Sea World, so we had those to keep us dry on the Grizzly River Run.  Everyone in our little raft wanted our ponchos!  We had a Fast Pass to Soarin’ so we used that to go to the front of the line.  It was a fun ride and I love that they put the smell of oranges into the ride when you fly over the orange grove.  I was getting hungry and I had seen these place in Cars Land called Flo’s V8 Café.  So, we went over there to eat (I had a good roast beef sandwich and my dad had this really good roasted chicken dinner).

We grabbed some seats for the 9:00 showing of World of Color.  This show was really neat because it showed the history of Walt Disney.  It’s hosted by hosted by Neil Patrick Harris and is really awesome.  I loved the part where they played Let it Go.  I sang along with Queen Elsa – my dad did too which was a bit embarrassing!  Check out the Fun Wheel Challenge which is a game you can play before the show starts.  The winner can control the lights on Mickey’s Fun Wheel for 30 seconds.  So cool!

They opened up California Scream after the show, so we rushed over there for a quick nighttime ride on the rollercoaster.  It was amazing at night!  I am so glad that I am tall enough to ride this trip.  We did the Toy Story ride one more time and headed back to our car.  I will miss Disneyland because I had so much fun this year!