A haunting visit to an elementary school in Hiroshima 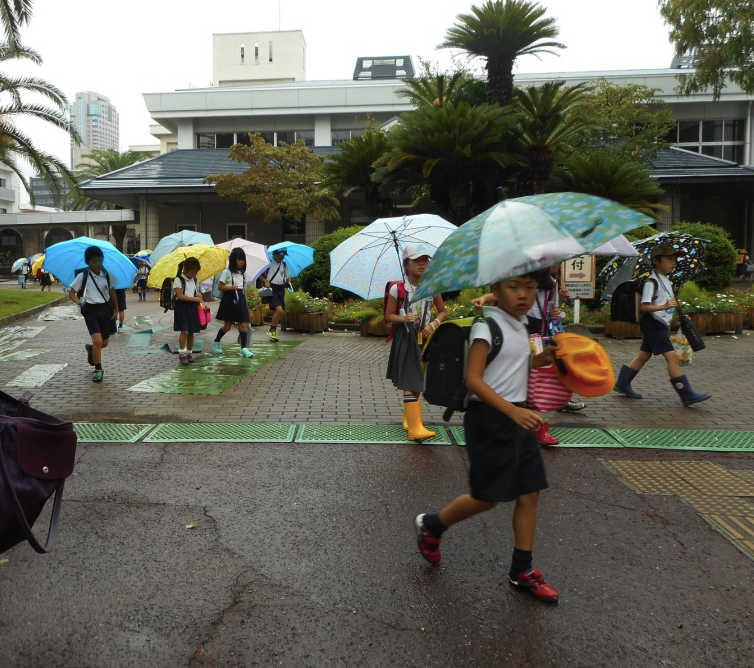 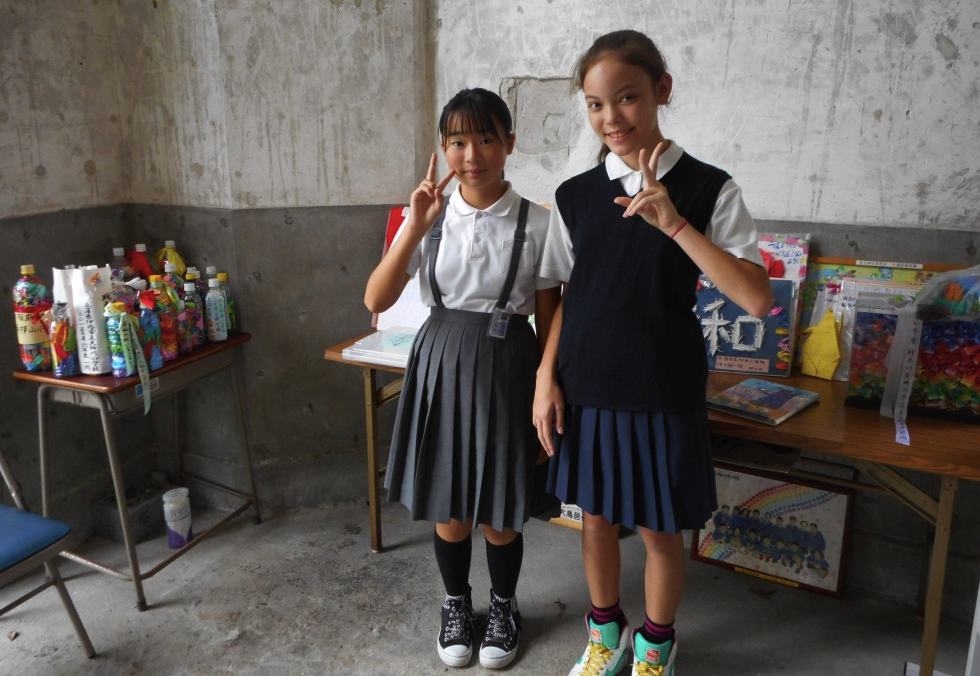 Miko and Amber at the Honkawa Elementary School museum in Hiroshima

HIROSHIMA, Japan — I’ve got chills as Amber Whaley, 12, and her friend Miko Uno, 11, lead us into their elementary school’s basement.

This was all that was all that remained of the Honkawa Elementary School when the atomic bomb was dropped on Hiroshima 70 years ago this past August 6. The school was less than 400 yards (slightly more than three football fields) from the epicenter. So close, Amber explained, that “the injured were brought here and many died here. Some are buried under our playground.” More than 411 children and teachers died.

Today, this basement houses the Honkawa Elementary School Peace Museum, a memorial to the children and teachers who were killed here (only one child survived) and, said Headmaster Kazunari Kono through an interpreter, “From the first grade, we are teaching our kids how to express peace in the world.”

Older students like Amber, the daughter of a U.S. Marine who has spent much of her childhood in California, and Miko, whose family has lived in Hiroshima for generations, yet never discusses the aftermath of the bombing, often are tasked with guiding visitors through the haunting exhibits — old photographs of children playing, modern wishes for peace penned by visitors and a huge model emphasizing exactly how close the building was to the epicenter, a scorched switchboard. Outside is a small statue donated by an anguished father.

That Monday morning 70 years ago was a regular school day, the girls explained, because a wartime system had shortened summer vacation. “Sometimes when I come to school I think about what if I had lived in that time,” Amber said.

That’s tough stuff for a 12 year old. But certainly there is no more important time for children around the world to appreciate the perils of nuclear weapons and everyone we met in Hiroshima — from Miko and Amber to tourism officials and other locals — is eager for their city to be perceived as one that fosters peace in the world with symposiums, peace studies for kids and, of course, museums like this one, as well as the world-famous Hiroshima Peace Memorial Park with the Hiroshima Peace Memorial Museum, Children’s Peace Monument and the haunting Atomic Bomb Dome — what was left of a domed building — which has become a symbol of the horror of nuclear weapons and is a UNESCO World Heritage site. 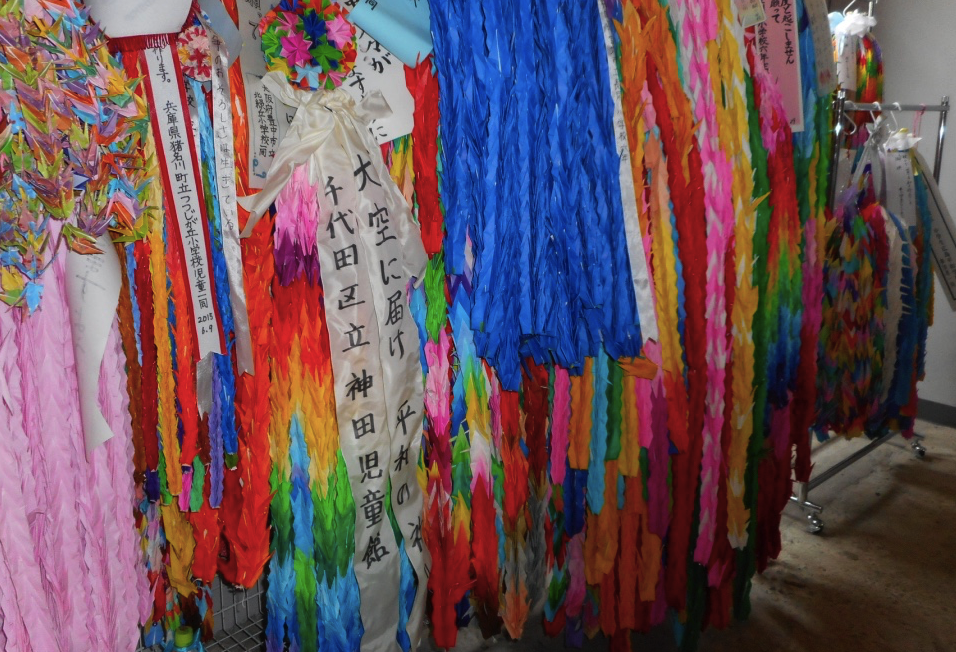 According to the Hiroshima Peace Memorial Museum, the Hiroshima bombing killed at least 130,000 people within four months, the vast majority in the epicenter died instantly. Tens of thousands more were killed three days later when the second bomb was dropped on Nagasaki. Japan surrendered less than a week later. No one knows exactly how many thousands more have died from radiation-related illness in the decades since.

Those who haven’t visited here may be as surprised as I was to learn how many children were among the immediate victims. Besides the Honkawa students, a lot of middle-school youngsters perished because they were in the heart of the city helping to clear fire lanes for the expected fire-bombings that had already hit other Japanese cities.

In an eerie similarity to 9/11, families fruitlessly put up posters and walked the rubble looking for children whose bodies were never recovered. The Hiroshima Peace Museum, which is undergoing renovation to make it more relevant to today’s young people, is full of reminders of their too-short lives — a pair of glasses, a sandal found in the rubble, recognized by a mother who had sewed the straps from a kimono. There are tattered school uniforms, lunch boxes, notebooks and some of the tiny origami cranes folded by Saduko Sasaki, who died at age 12 from leukemia after being exposed to the bomb’s radiation as a toddler.

Saduko believed a chain of 1,000 paper cranes could make her wish to recover come true. After she died, children around the world took up her cause and the Hiroshima Children’s Peace Monument was the result of their donations. When we visited the monument recently, there were thousands of origami crane chains brought by Japanese children who typically visit here either just before middle school or during middle school on school trips. (More about Saduko can be found on the Kids Peace Station website).

There is also a special exhibit “Children of Hiroshima” all this year in the Peace Memorial Park at the Hiroshima National Peace Memorial Hall for the atomic bomb victims with essays about atomic bomb experiences written by children who were in elementary school at the time. Even for those who survived relatively unscathed, their lives were changed forever.

Incredibly, Honkawa Elementary School reopened in 1946 but, as we learned at the museum, it was in terrible shape. Kids inside had to use umbrellas when it rained and huddled against the cold in the winter. Students were so in need of supplies that collections were taken up in American cities, including a donation of marbles from a Washington, D.C., church. The marbles and children’s thank-you letters are on display.

Norio Shiotani, the director of a division of the Tourism Policy Department here, said the biggest challenge is to encourage visitors to come and experience Hiroshima today, a city of more than a million people, which incidentally includes Miyajima Island with its fantastic Itsukushima Shrine and O-torii Gate — one of the most famous symbols of Japan.

“Because it is so sad, people don’t want to come,” Shiotani said in his office. “Look around and you see a beautiful city,” he urged.

As our tour of their school museum ended, our guides Miko and Amber suggested that everyone, “Come here and think about peace.”