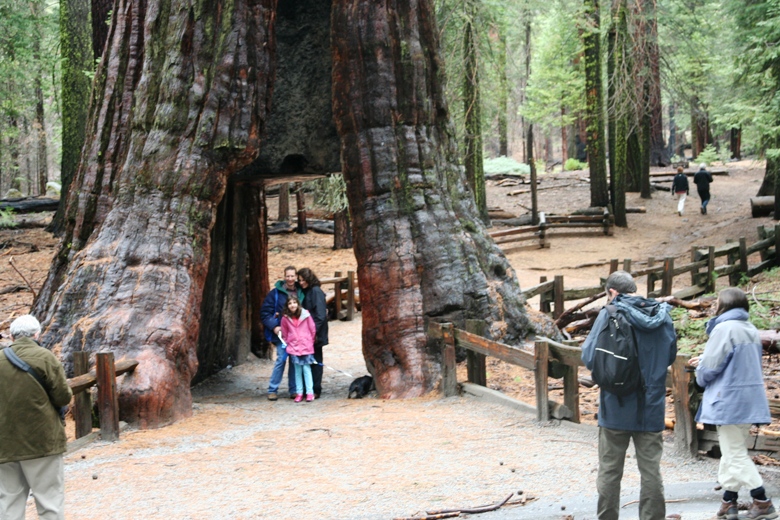 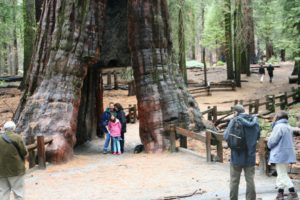 The California Tunnel Tree at Yosemite

DAY 4 — Five year old Rivers Klopson is turning cartwheels on the rocks next to Yosemite’s famous Vernal Falls. It’s sunny and everyone sitting on the rocks is admiring the rushing falls and congratulating themselves at the end of a rigorous 3 mile hike up slick stone steps, getting splashed by the waterfall, to one of Yosemite’s most amazing sights.

“I liked getting wet,” said Rivers. “It was our first big hike in Yosemite,” reported her eight year old brother Leif.

Watch a brief video of our Yosemite trip (click here) That made me smile, thinking of two other kids about the same age who were very proud of themselves for conquering the arduous hike.

Those kids were my two — Reggie and Matt. We had left baby Mel at home with dad as the three of us had embarked on a fall tour of northern California for a book I was writing back in the early 1990s. Vernal Falls was their first “big hike” in Yosemite too and I recall that night when we celebrated by having dinner at the historic Ahwahanee Hotel — a designated National Historic Landmark and where room rates can be over $300 a night here in the park that the waitresses made a big fuss over them.

So here we are back on the same trail some 15 years later, my knee a little worse for the wear, my husband Andy, Reggie and her boyfriend Dan Foldes, who both live in San Francisco now.

Reggie has grown up to love the outdoors, leading teens on back packing trips in Yosemite, In fact, earning a designation as a Wilderness First Responder. Did those early hikes, I wonder, spur her interest and her love of the wilderness?

Just as she did then, she leads the way up the slick granite steps (over 600 steps!) dodging water that pooled from a rain storm, a big smile on her face. I joke that I forgot what I always tell parents to carry – M&Ms in their pocket. We have Nature Valley Granola Clusters this time and some honey almonds.

I’m so glad to be in Yosemite in Autumn. Despite forecasts of rain, it is a beautiful day and not too crowded. In fact we run into more foreign tourists than Americans, and see some backpackers on the trail who are heading to the famous Half Dome some 15 miles up the trail. Another trip, Reg and Dan said.

We arrived in the park the night before in a driving rainstorm, grateful we were staying at a cabin near the south entrance so that we didn’t have to drive another hour on winding roads to Yosemite Valley. Our tidy two bedroom one bath cabin, complete with wood-burning stove (lots of dry wood outside under a tarp (www.redwoodsinyosemite.com), was perfect for a night spent eating excellent chili and cornbread — we’d “provisioned” at a market half way from San Francisco, and to get us ready for our visit, the first couple of episodes of Ken Burns new The National Parks: America’s Best Idea. (We’d brought the DVD and the cabin is even equipped with a TV and player. (www.pbs.org) Since the first couple of episodes focus on John Muir and Yosemite, it seemed a terrific way to start our visit.

I loved staying in our own cabin — no other crowds or people. And not only is the park less crowded but it is cheaper to stay since it is value season. A two bedroom is $220 a night instead of $316 during peak season.

We started the next morning nearby at the park’s famous Mariposa Grove of Giant Sequoias, some older than 3,000 years! The tallest tree in the grove is about 290 feet tall-taller than the Statue of Liberty! The Grizzly Giant is estimated to be 1800 years old and one huge limb is almost seven feet wide. It is really an amazing site.

Some 50 yards farther up the trail, we encounter the famous California Tunnel Tree — a tunnel cut through the trunk in 1895 to allow horse drawn stages to pass through. Today tourists love to take pictures here. Originally, there was another tunneled tree but it is no longer standing. The Wawona Tunnel Tree collapsed in 1969 after a massive snowload — perhaps a 1000 years prematurely. But the experts say all the pictures and stories tourists told and sent back home contributed to the survival of the younger trees in the grove.

When visitors come to Yosemite for the first time, they want to see the Giant Sequoias and the amazing Half Dome , Yosemite’s most distinctive monument that rises 8,842 feet high and is 87 million years old, and El Capitan, the massive granite rock face that stands 3,593 feet high. (People come from all over the world to climb it but we don’t see any climbers today.

Along the way, we meet lots of families, like the Klopsons, from near Monterey, who hike up Vernal Falls with their two year old in Justin Klopson’s back. “I’ve come here since I was a child but this is their first visit,” said Jimi Klopson, who said the family came this week when the kids were off from school because they thought it wouldn’t be as crowded as in summer. They braved the rain in their tent, she said, and managed to stay dry. I’m guessing the kids thought that was a great adventure.

After Vernal Fall, we could have kept going up to Nevada Fall — another mile and half but even Reg and Dan were ready to turn back. We stop at the “Tunnel View” just before heading into the Wawona Tunnel for an amazing view of El Capitan, Half Dome, Sentinel Rock, Cathedral Rocks and a rushing Bridalveil Fall. It is so beautiful, so majestic. I wonder what it was like for those early tourists coming here on dusty stage coaches.

We end the day in our cabin over beers and excellent chili. This time, Reg is congratulating me on a successful hike up to the top of the water fall instead of the other way around. “Good job,” she says. I smile at the memory of the days when I was doing the encouraging and handing out kudos at dinner.