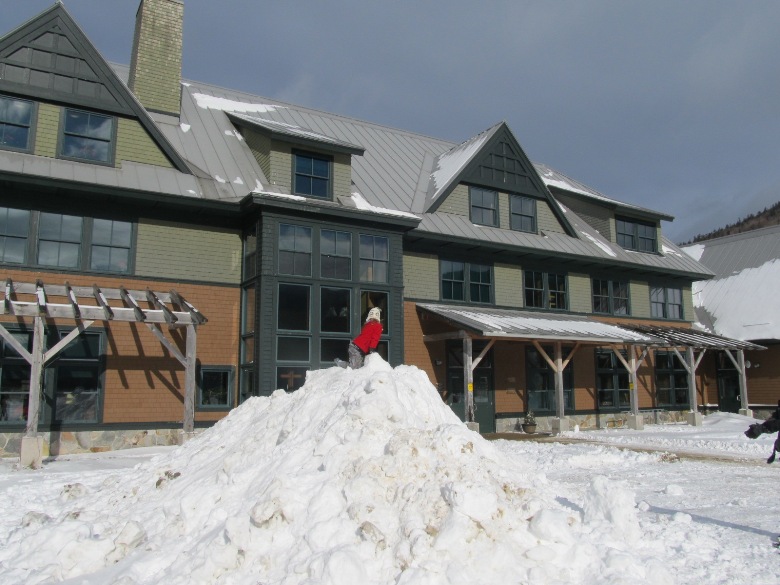 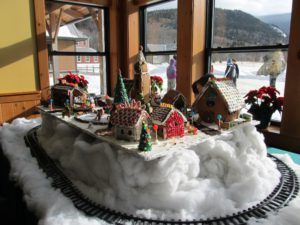 The gingerbread collection inside the AMC Highland Center

BRETTON WOODS, NH (Day 1 of 4) — Are you prepared for the outdoors?

No worries if you need an extra layer, waterproof boots or pants.  You can borrow them—free.

“Part of the mission of the Appalachian Mountain club is to help people get outdoors in the mountains,” says Rick McCarten, who oversees this center, which besides the 34-room lodge that can sleep 138 offers farm to table dining and activities from guided hikes and snowshoes to evening trivia. And cookie decorating.

Some of the families we meet the weekend before Christmas have made a visit here an annual tradition, like the Canes, who have come nearly every year since their nine year-old was a baby.   “It’s a great spot for a family because of the community that exists,” says Andy Cane, a professor.  His wife Diane adds it’s no small thing to be able to outfit her sons for the snow at no charge.

“There is always something to do,” agreed 13 year-old Collin.  That there isn’t TV in the rooms doesn’t seem to be a drawback, he and the other kids here said.  “I always have my guitar and art supplies and there is always a lot of activities…it is very relaxing,” said 13 year old Sarah Stockdale who has been coming with her family—including grandparents and cousins—since she was little.  “It’s a nice in-between camping and home,” she said. 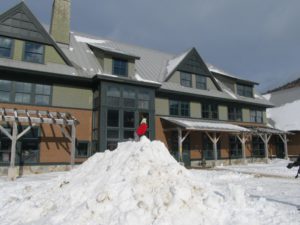 The main lodge at the AMC Highland Center in New Hampshire

That there are shared bathrooms doesn’t seem to phase anyone either—it is part of the experience.

“None of us would be comfortable in a regular hotel,” said Fran Hiller, here with an extended group including a gaggle of grown kids.  “And they all wanted to come with their parents!” she laughed.  “”This is so easy—they provide all the equipment.

In fact, says McCarten, the crowd here won’t be looking at the mountains—they will be outside reveling in them—hiking in summer and fall, snowshoeing and cross country skiing in winter.  “There are plenty of BMWs here,” he said.  “They are coming here because they want to rough it.

The AMC operates 51 places to stay from Maine to Virginia—from campsites to back country huts to lodges like this one—unique because of its emphasis on programming, especially for families, and even its liquor license.  The AMC is celebrating its 125 anniversary this coming year—The Highland Center is celebrating its 10th anniversary.

They even have backpacks for loan for babies.  They have more than 30 in their group from six different families, including grown kids who have come from around the country.  “Some are serious hikers,” she said.  “Some just want to enjoy the outdoors.”

The free lending library of gear—courtesy of Maine-headquartered LL Bean, is one thing guests comment on most, said McCarten.  He also noted that the guests coming here are not coming because it is necessarily cheap but because of the experience.  “There are a lot of nice cars in the parking lot,” he noted.

But what is key is not getting the wrong guest—those who would be distressed at the shared bathrooms (though there are 15 rooms with the private bath( the lack of a spa or weight room.

This is a place where the guests want to hike XC ski or snowshoe all day and then come in for beer and a spirited game of trivia in front of the fire before sitting down for a dinner that showcases meats and vegetables from local farmers.   There might be a talk about Moose (check out those huge antlers and those skulls!) or an art project for the kids.

“You don’t have to worry about your kids here,” said Diane Cane.

“An  there is always something to do and there is plenty of nothing to do too,” ads her husband  Andy, looking out the window at the falling snow