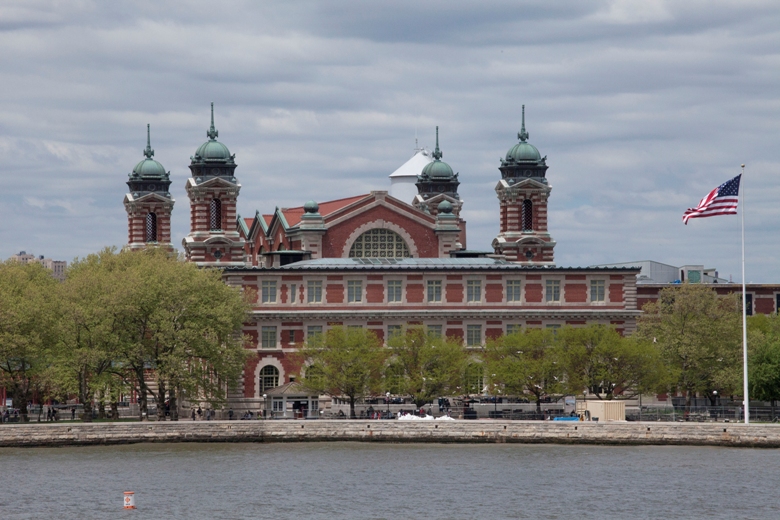 We’re standing atop the pedestal of the Statue of Liberty — about halfway up the 305-foot, 1-inch climb to the crown — looking out at the New York City skyline.

Even the jaded high school boys I’m chaperoning can’t help but be impressed. “You don’t realize how big it really is until you’re here,” said Christopher Morales, 15.

She certainly is big — her head is 17 feet, 3 inches-long; her right arm 42 feet long. In the museum, everyone poses for pictures in front of a cast of her giant foot.

“You’ve heard so much about it and seen so many pictures, but it’s amazing to be here,” said Ruben Guardado, 17.

I guess that’s why, despite the blustery January weather, crowds of bundled-up tourists from around the world lined up to take the Statue Cruises ferry to Liberty Island, good-naturedly taking off belts and watches for the security screenings. The second stop would be historic Ellis Island where between the late 19th and early 20th century some 12 million immigrants passed through on their way to a new life. The day is a bargain with tickets costing less than $20. (TIP: If you want access to the pedestal, as we did, either by stairs or elevator, or if you want to climb to the top of the crown, get tickets in advance.)

You can’t let winter weather stop you from sightseeing, especially when there is so much to see in a city like New York. You might even snare a deal with the city’s NYC Sunday Night Stays program, which encourages you to spend Sunday night in New York when hotel rates are the cheapest, tickets are available on Broadway and lines are shorter at museums and attractions.

For example, winter rates at the Conrad New York luxury hotel start at just $209 for spacious suites overlooking the Hudson River in Battery Park with proximity to a movie theater and moderately priced restaurants. (Kids loved that they can close the sliding door and have a separate “room” and TV. The teens loved the soaring lobby with its modern art and couches ideal for warming up with a cup of hot chocolate after a day of sightseeing.)

We spent our first night three blocks from the Empire State Building at the affordable Wolcott Hotel, a New York City landmark about to celebrate its 110th anniversary. (Rates start as low as $120 a night.) It was fun to step back in time in the lobby, though the rooms, of course, are totally modern.

In our winter weekend, we hit many of the Big Apple’s top tourist attractions — The American Museum of Natural History, the top of the Empire State Building at night, the Intrepid Museum, Times Square and a play. (The boys gave a thumbs-up to the off-Broadway “Illuminate” in which dancers wearing wireless lighting systems perform to techno music in the dark, their costumes fantastically lit up.)

(CityPASS, or New York PASS, are worth the investment, if you plan to visit many of the top attractions. Admission is discounted and you avoid the lines.)

No matter what the weather, Lady Liberty should be on everyone’s must-see list. She just reopened last summer after Liberty Island was damaged during Hurricane Sandy; Ellis Island, also pummeled by the super storm, didn’t reopen until last fall.

The kids were impressed that most of the donations to build the pedestal were less than $1 — France famously gave the United States the statue to honor the ideals of freedom and liberty, but it took a major fundraising campaign led by newspaper man Joseph Pulitzer to raise the needed money to erect the statue.

The kids also thought it was funny that Lady Liberty came packed in 214 crates, like a giant jigsaw puzzle.

I was more struck, though, by the fact that, for these boys — some the first generation in their family born in the United States — Lady Liberty and Ellis Island didn’t have the same meaning as for past generations of immigrants. “My parents have never even been to New York,” explained Morales, whose parents emigrated from Mexico to Los Angeles before he was born and subsequently became U.S. citizens.

Truth be told, most of them fell asleep during the historic movie at Ellis Island that chronicles the history here; Beginning in 1892, immigrants — some 12 million — were inspected and questioned before being allowed to enter the United States and take their first steps toward becoming American citizens.

Today, more than 100 million Americans can now claim their ancestors came through Ellis Island, including my husband’s family. You can search through the American Family Immigration History Center to see if you can find the name of someone in your family who passed through. The center houses ship passenger records for more than 22 million people who landed here between 1892 and 1924.

By the early 1900s, as many as 5,000 immigrants, many whole families, were arriving here daily from Italy and Russia, Ireland and Sweden, among other places. These immigrants were subjected to a painful eye exam with a button hook to check for trachoma, a contagious eye disease. Doctors would decide in just six seconds if someone’s physical defect or mental confusion warranted stopping them from entering the country, at least temporarily. (Those denied entry had their coats marked with a chalk letter.) Sadly, some family members were sent back to their country of origin. We learned, however, that most of the immigrants did successfully pass through Ellis Island and left New York for places where they had family and friends — Germans to the Midwest; Swedes to Minnesota, the Irish to Boston. Some immigrants were young teens on their own.

The families of the boys I chaperoned certainly have had different immigration stories.

But, they all agreed, however or wherever you come from, arriving without speaking English or having much money remains just as daunting today.