At the Marine Mammal Center near San Francisco, little miracles happen every day 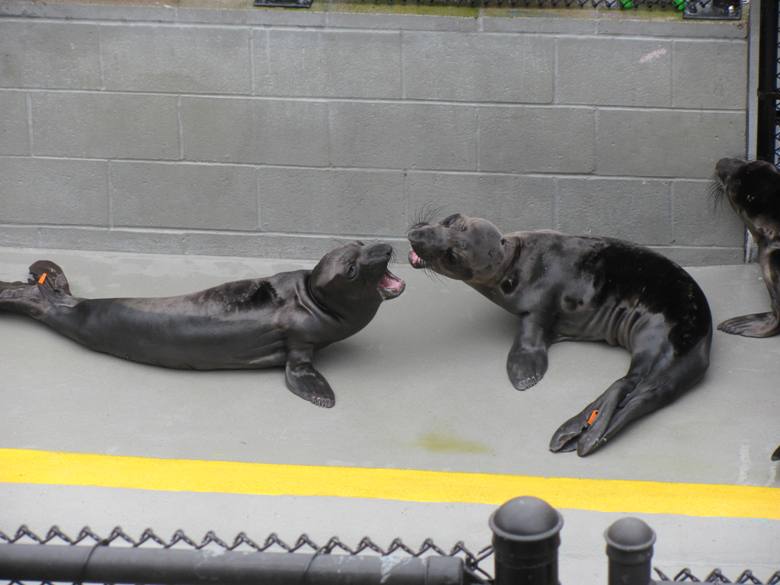 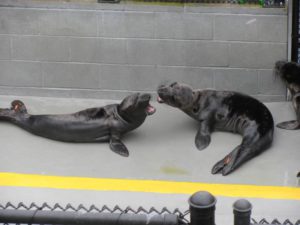 Elephant seals weigh 75 pounds when they’re born and now, a little more than a month later, these guys should weigh more than 300 pounds.

That they don’t is one reason they are here at the Marine Mammal Center (www.marinemammalcenter.org) in Sausalito CA, just over the Golden Gate Bridge from San Francisco.

They were stranded on a Northern California beach, left by their moms who needed to find food, but not yet adept enough to sustain themselves in the ocean.  They could have died but because they were spotted, they ended up here at the Marine Mammal Center, the  largest such rescue facility in the world.

The 45 member staff and 800-plus volunteers here are responsible for rescuing some 800 animals a year—elephant seals, sea lions, harbor seals and the occasional whale or dolphin.  People who spot a stranded or sick animal call (415-289-7325) and the staff mobilizes for a rescue.  The center is responsible for 600 miles of Coast all the way from Mendocino south to San Luis Obispo, and since 1975 has rescued over 13,000 marine mammals.  At the same time, the center offers a growing number of educational programs at schools all over the Bay Area.  (Full disclosure: My daughter Reggie has been spending this last year working at the Center as an Americorps Volunteer, driving the “Whale Bus” to schools all over the Bay Area and teaching educational programs that not only teach kids about marine mammals but how kids can impact their survival).

On our recent trip to California, we learned a lot about what we can do to better protect these creatures and the ocean — from reducing the toxins we use in the garden that end up in the waterways to not using plastic bags to not releasing helium balloons into the sky as they often end up in the marine food chain.  Even cutting rings apart on six packs can help.  Birds, fish and other animals often get caught in the rings.

At the California Academy of Sciences in San Francisco (www.calacademy.org) we saw how food choices make a huge difference in our carbon footprint (I didn’t know that industrial farming of livestock is responsible for more  carbon pollution than the entire transportation industry).  Eat free-range, grass-fed beef instead, the museum exhibit suggests, as well as local seasonal organic foods that don’t have to be transported thousands of miles.

The website and app also will help you find restaurants that feature ocean-friendly seafood choices—like the stellar Waterbar  (www.waterbarsf.com) overlooking the San Francisco Bay where we ate dinner our last night on the West Coast and where every menu item tells you how the fish was caught, and where.  The Oak Roasted Hawaiian Ono was caught aboard the Kay Mary out of Honolulu and the Chili Roasted Steelhead  was “sustainably raised in the Cascade Mountains of Washington.”  The food was delicious, by the way.

I think we appreciated it all the more because of all we’d learned at the Marine Mammal Center, the Monterey Bay Aquarium and the California Academy of Sciences (along with the Aquarium of the Bay and the San Francisco Zoo all part of the San Francisco Seafood Watch Alliance).  We now realize how little changes we make in our lives—like opting for wild salmon rather than farmed salmon– can have a big impact on the health of our oceans and the lives of these creatures.

The windswept day we visited the Marine Mammal Center, there were 25 patients.  Yes this is a full-scale animal hospital with vets and support staff who do detailed blood work, x-rays, ultrasounds, and keep copious records that have made this Center respected for its research.  The experts here have developed marine mammal research technology providing expertise on marine mammal illness, even how to administer antibiotics to humpback whales.

There were three California Sea Lions, two harbor seals and 18 elephant seal pups.  We learned three more elephant seals were on their way.   Last year, 414 animals were released back in the wild—eight released this year.  That is the goal, of course.   About 50 percent survive and are able to be released.

Some can’t go back, though.  Silent Knight—so named because he was found before the holidays—had been shot in the face and blinded.  The Center is looking for a zoo for him.  There have been famous rescues too—like Chippy, the California sea lion found shot 60 miles from the ocean. He’d jumped up on to a California Highway Patrol Car. He recovered and was released.

In case you are wondering about the difference between seals and sea lions, my daughter explains what she tells the school kids: sea lions are like lions—they have ear flaps and big front flippers that allow them to walk on land (we see lots lolling just offshore in Monterey) – and they roar.  Seals are more like sausages who just scoot on land.

We learn the busy season here is just starting because  the elephant  seal pupping season has just ended (February) while the harbor seals are born in late March and April and sea lions in June.

Animals come here with a variety of problems—everything from the malnourished elephant seal pups to cancer to bacterial infections to getting tangled in fishing net  or ingesting a plastic bag.  There are remarkable survivor stories — Theo the elephant seal who recovered from a nearly fatal shark attack thanks to surgery; Artemis the stellar sea lion rescued and then seven years later, spotted with her own pup. (When some animals are released, they are tagged with satellite or radio trackers so researchers can see what happens to them.)

Sadly, eight to 10 per cent of the animals that end up here are injured through human interaction.  Along with treating the sick animals, a big part of the mission is to show visitors — typically 100 every weekend — and school children how they can help. Doing something as small as picking up trash on the beach or holding on to a balloon can save a seal or sea lion from ending up here.

Even if you live far from the Coast you can help by becoming a member.  There are some 30,000 around the world.

We see the animals in and around the pools, visit the Fish Kitchen where the food is prepared for the animal patients (want a Fish milkshake?  That’s what the baby elephant seals get), check out the Science Lab and see where  necropsies are done on the animals who have died—to learn more that can help save others.

The baby elephant seals loll around their pools. They are too cute.

We can only hope they make it.