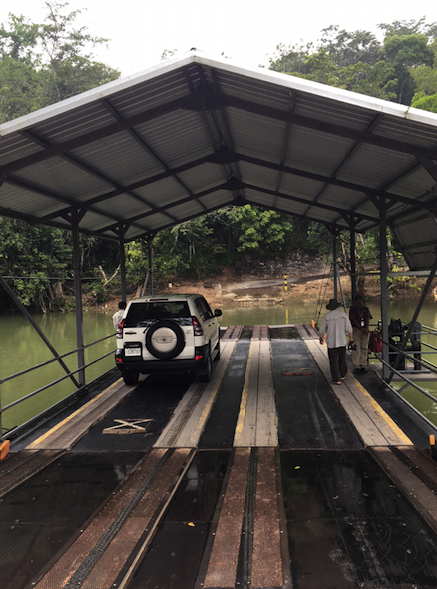 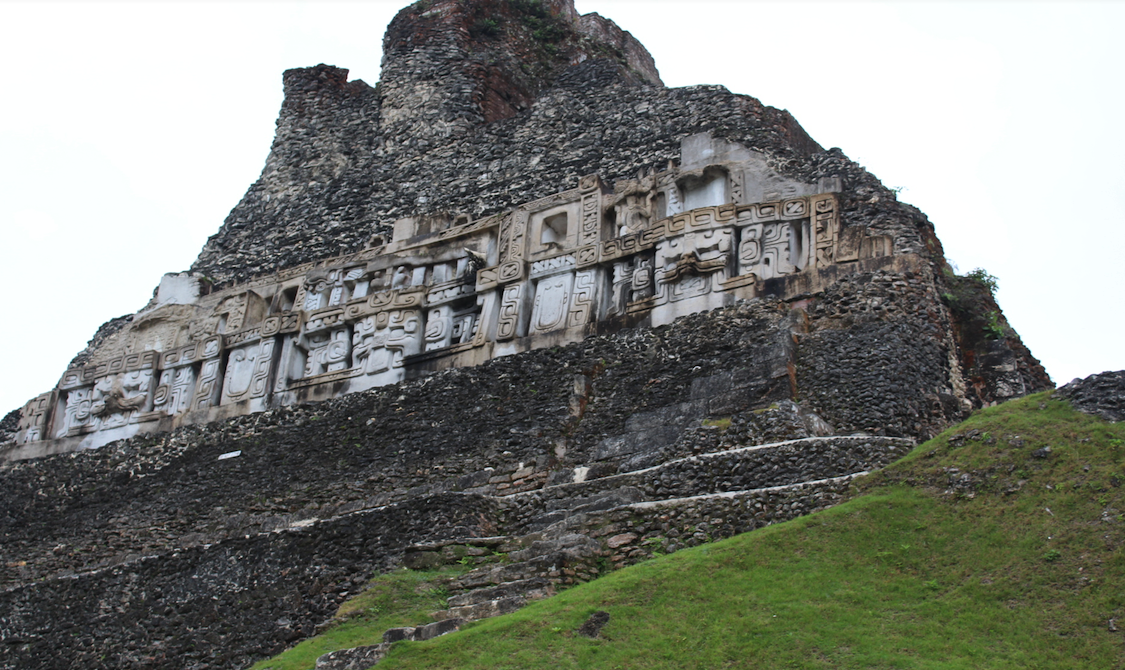 Mayan ruins and restoration at Xunantunich in Belize

You have to if you want to time travel back to 700 or 800 AD when the Xunantunich Maya Site in the tiny village of San Jose Succotz was a thriving city that was home to as many as a million people—keep in mind that Belize’s population today is only about 370,000 and the country is about the size of Massachusetts.

Belize, with more than 600 Maya sites, the largest concentration of Maya sites in all of Central America, is known as the Maya Heartland. Xunantunich (pronounced shoo-nan-too-nich) is not only impressive but among the most accessible, just a short drive from The Lodge at Chaa Creek where we are staying.

After perusing a couple of markets where vendors promise the bags and colorfully embroidered blouses are handmade locally, we take a hand-cranked ferry over the Mopan River. The grounds include more than 25 temples and palaces that were built and the chance to climb the stone steps to the top of the 130-foot El Castillo pyramid from which we can even see Guatamala. We learn that Caracol Maya Site contains the tallest building in Belize—143 feet! 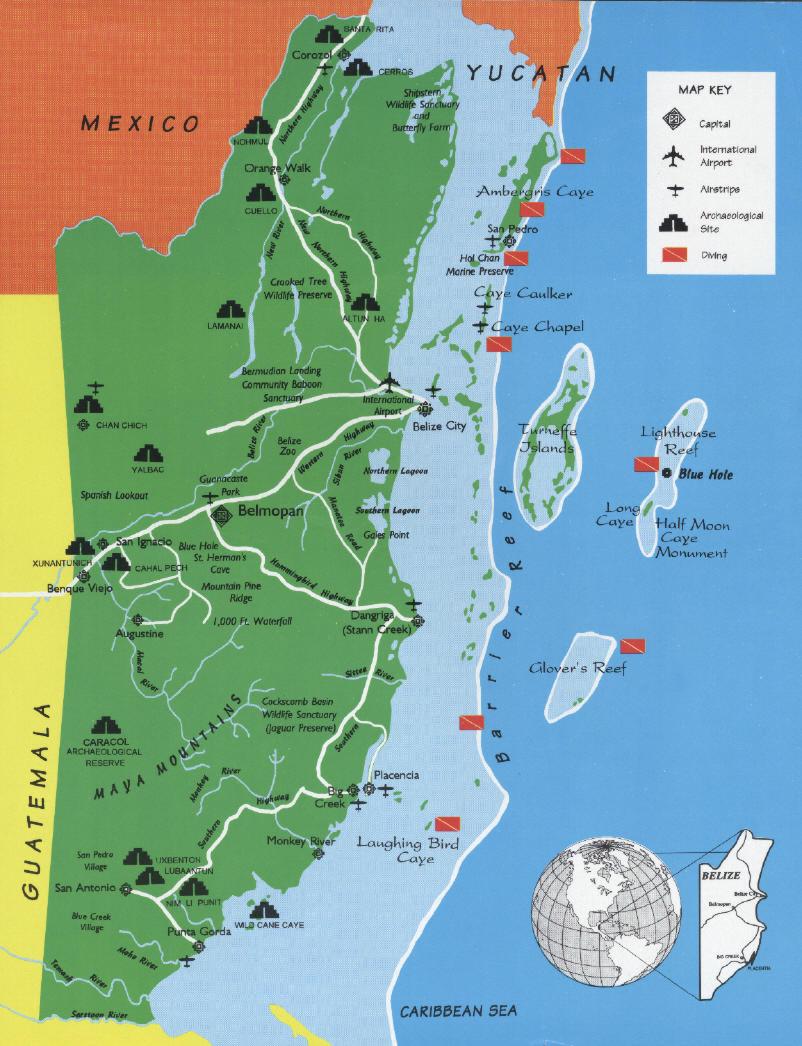 More than 600 Maya sites in Belize

We imagine a plaza teeming with markets and another higher one that was the gated community of its day where the elites lived and interacted. To make sure there was no mistake who they were, they’d shine a bright light in their baby’s eyes to make him cross-eyed and put a board on his forehead to flatten it. “Those were symbols of power,” explained our guide, Ramon Rodriguez from Ute Expeditions.

There is evidence, he said, that there was a small village as far back as 300 BC. All around us is jungle but in Mayan times this was all cultivated farm land. The elites grew taller—up to six feet—and lived far longer than the commoners who were a foot shorter and died in their twenties and thirties. That’s because they worked so hard and didn’t have good food, our guide explains. Sound familiar?

Cacao seed was often used as currency, we learn, and we see an ancient casino where the elites played games, likely with beads. We see replicas of carvings, now protected, that represent the Sun God, the Rain God, the Moon God and one for medicine and fertility.

The site was first discovered in the 1880s by British Governor Sir Alfred Maloney, but archeologists first worked here in the 1950s, with more work in the 1990s as tourism grew in Belize.

We learn the ruler was a lot like our politicians—changing clothes so the commoners thought he was a god and proclaiming what would happen—an eclipse, when it would rain… but when those predictions proved false past 900 AD, the commoners didn’t believe anymore and began to leave, heading to Mexico and Guatemala.

We see an ancient a court where Pokta Pok was played with a big rubber ball made from rubber trees –kind of like soccer except you couldn’t use your hands or feet. Also, you might be killed if you lost—if you had been captured in a war. Of course the game was fixed (like modern professional wrestling).

A lot to think about… flat foreheads, games where the losers are killed. We talk over lunch at nearby Benny’s Kitchen, as popular with locals as with tourists for empanadas, 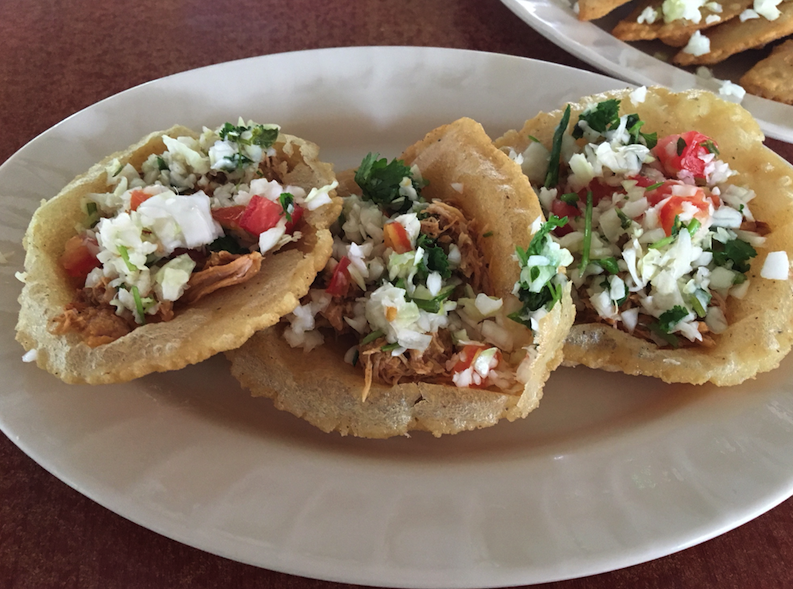 We skip the cow foot soup, Pig Tail Boil Up and Gibnut Stew (gibnut is a huge rat-like animal) and wash it all down with coconut water served in a coconut and fresh juices. (Soursop anyone?)

What I love about Belize is there is so much to do whether inland. where we are now, or on the Coast. And there are so many cultures—Maya, Mestizo (who came in the mid 19th century after fleeing the Yucatan Kriol, Creole (descended from Africans and Europeans), Garifuna (descended from Caribbean people), Arawak (Indians and Africans), East Indian (who first came in the early 1800s), Mennonites, Arab and Chinese (who were brought here in 1865 as indentured laborers to work in the timber camps with many arriving in the 1940s).

Maybe that’s why the food is so good! Time for dinner!