BEYOND THE BEACH IN BELIZE 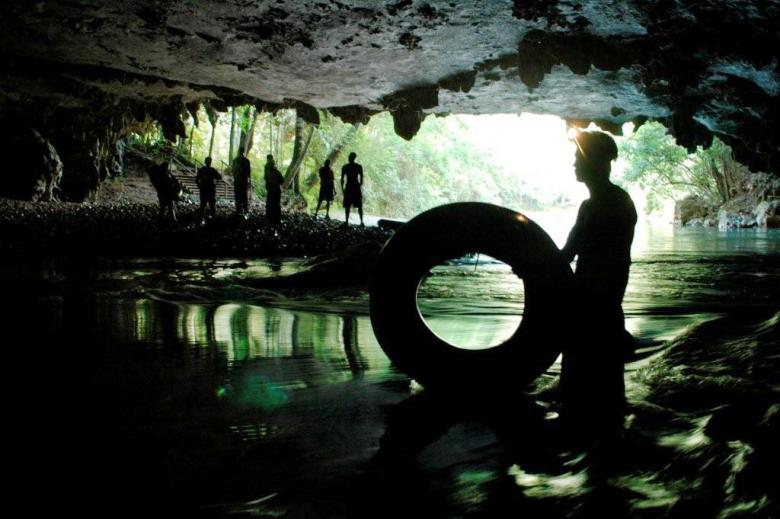 There were no roads to the overgrown farm in the Cayo district of Belize that the young couple hoped to run. Their land was a jungle – literally. “But there was something about the place,” Fleming, who was raised in England, recalls more than 30 years later.

“I felt it,” adds Lucy Fleming, originally from New Jersey. “This place always had a certain amount of magic. We were young and crazy — no money. We decided to be pioneers.”

But ultimately, not in the way they expected. Though the Flemings started out living in a cabin without indoor plumbing, electricity or running water, raising vegetables – taking them by canoe to sell at local markets – the couple is now at the forefront of the burgeoning ecotourism movement in Belize. Chaa Creek (www.chaacreek.com), their 365-acre nature preserve in the Cayo District, (guest accommodations include 24 thatched-roof cottages, kids stay free and those under 12 eat for half price), is a model for sustainable tourism and new-style adventure family travel. “People want the kids to experience the real deal,” explains Lucy Fleming, past president of the Belize Tourism Industry Association. She raised her two kids and five foster children on the property.

So many adventurous families are finding their way to Belize, a small (less than 300,000 people), peaceful, English-speaking country that borders Mexico and Guatemala, where the U.S. dollar is accepted everywhere and the exchange rate is fixed, that the Flemings are launching a Mac Morpho Rainforest Adventure for kids and teens complete with horseback riding to ancient Mayan ruins on site, as well as offering guests the chance to learn how to make tortillas with nearby villagers – after canoeing down the Macal River – and planting corn and beans in the big organic garden. As an added bonus, upon check-in, kids get a ready-to-be hatched Blue Morpho butterfly from the on-site Blue Morpho Butterfly Breeding Center. There is also a more modest tent camp where families can stay in screened platform tents with communal bathrooms. Parents can either join the activities or take a few hours on their own – maybe stealing away to the spectacular hilltop spa that’s run by the Fleming’s 30-year-old daughter Bryony. The resort’s naturalists are especially attuned to kids. (Ready for a night hike to see snakes and other nocturnal creatures?)

But this place isn’t for everybody. There’s no air conditioning or TV, no phones in the casitas and Internet access only in the conference center. Be forewarned you might spot a lizard or a gecko in your cottage. A pool is just now being built. The food is tasty, but not gourmet fare.

That’s where Belizean hotelier Ian Lizarraga — himself the father of two young kids — and his Irish partners come in. A few miles from Chaa Creek and just outside the town of San Ignacio (69 miles from Belize City) they’ve opened the 15-room Ka’ana Boutique Resort (www.kaanabelize.com). Set in tropical gardens, Ka’ana, which means “heavenly place” in the Mayan language, lets guests experience the jungle and the nearby Mayan ruins without giving up their creature comforts, Lizarraga explains. There’s air conditioning, WiFi, plasma TVs, espresso makers, room service and an infinity pool that’s irresistible after a long, hot day touring along Belize’s bumpy backcountry roads. You’ll also find iPod docking stations, signature martinis, a wine cellar, and 25-year-old chef Manolo Castillo, already considered one of the best chefs in Belize, who whips up creative dishes with vegetables and herbs from the resort’s garden. (How about a papaya scrub in the spa, after a long day in the jungle?) And then there’s Ka’ana’s stellar guide, 24-year-old Wilbert Moh. Lizarraga welcomes families with open arms. (Check out the second room at half price deal this summer.)

Still, when families think of Belize, they think of the beach, of snorkeling and diving along the reef that stretches nearly the length of the country. (More about that in another column.) “But there’s so much more than that here,” says guide Wilbert Moh, who is so enthusiastic about this region where he was raised that he should be working for the Belize Tourist Board. (Visit www.travelbelize.org) Go caving – on a tube, on foot, or in a canoe – in some spots you’ll pass the remains of victims of Mayan human sacrifice, tour Mayan ruins or zip line above the jungle canopy, shop at the bustling Saturday market in nearby San Ignacio (I’ve never seen so many watermelons!) or swim in natural pools. You won’t have time for all the adventures. “My kids see Belize and its people and its activities as a HUGE adventure,” says Lizarraga.

Families can easily divide their stay between the beach and inland. Chaa Creek, for example, offers a variety of such packages, arranging the transfers. “The whole idea of the jungle appealed to me,” says Amy White, who was traveling from the Southeast with her daughter and, like us, split her stay between this area and the Inn at Robert’s Grove (www.robertsgrove.com), which is located on the beach near the sleepy fishing village of Placencia.

Katrina Pratt, from California, who was traveling with her husband, 10-year-old daughter and 8-year-old son, reported that her kids loved exploring the Mayan ruins — clambering up and down the ancient limestone steps — as much as the beach. “We’re not the people who like to hang out and get a sunburn,” she explains.

Sustainable tourism, meanwhile, has been the Flemings’ goal from the beginning, when young travelers found their way here by word of mouth, offering to help on the farm, and the Flemings built a second simple cabin to house them, feeding them alongside their kids. “We were eco before eco was a word,” Mick Fleming laughs. Today, the huge organic garden produces much of the vegetables and fruits guests eat. (Have your kids ever seen pineapple grow?)

There are all kinds of birds in the area – nearly 300 species within five miles of Chaa Creek – and screeching howler monkeys. “It’s time to introduce the next generation to conservation,” Mick Fleming says.

Honestly, I loved both places – and I don’t say that often. I especially loved what the region had to offer families. Lucy Fleming says family tourism has increased 100 fold at Chaa Creek in the last several years, even in summer – the traditional rainy season.

The best part, Mick Fleming promises, “The kids will do things they never get to do at home.”

See you in the cave.