Climbing Mt. Kilimanjaro with my daughter 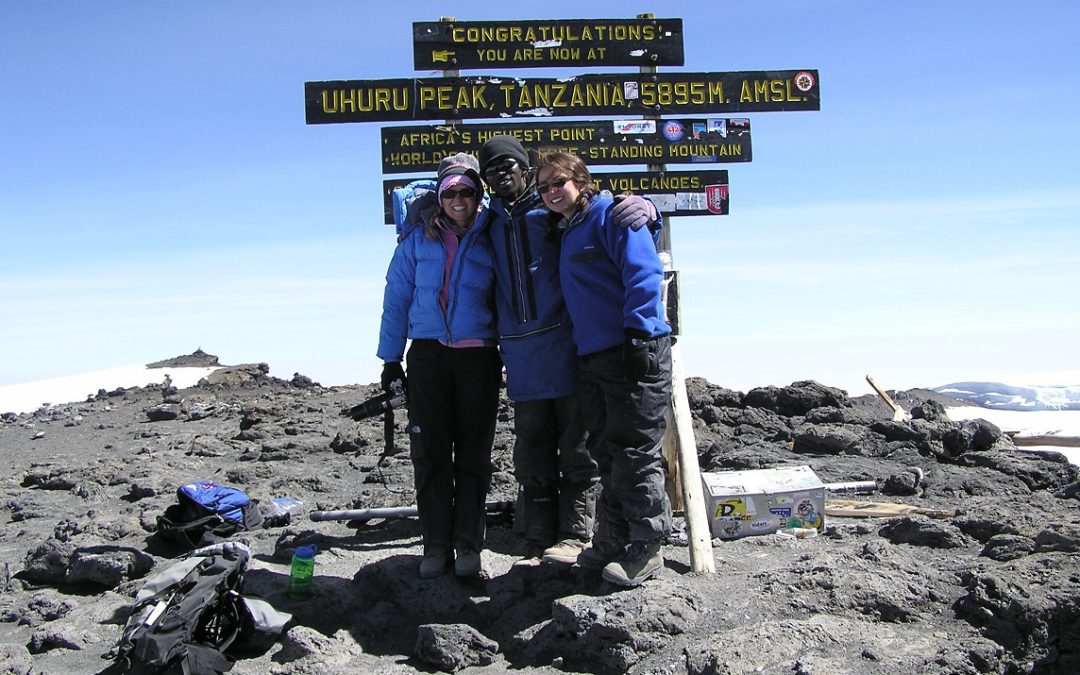 It’s well below freezing, and the air is so thin that we have to stop every few steps to breathe. I’ve never been more tired.

Childbirth was easier. We haven’t showered in days. Our clothes are filthy, and this is the vacation of a lifetime.

My daughter Reggie and I were in Tanzania on our way to the summit of Mount Kilimanjaro, which at 19,340 feet is Africa’s tallest peak and one of the Seven Summits that draw climbers from around the world.

Because reaching the top of Kilimanjaro doesn’t require technical climbing skills, the climb is attracting growing numbers of inexperienced hikers like us. The holidays are the one of the busiest times on the mountain.

Many people who lose 35 pounds would splurge on a new wardrobe. I opted for this adventure—one I could share with my daughter before she left for college.

That was six years ago and I’ve traveled the world since. Still, our Kili Climb remains one of the most memorable trips  we’ve ever taken. And of course we weren’t nearly as worried about getting to the top before the glacial ice completely disappears.  (We traveled with Boston-based Thomson Safaris–I knew owners Rick and Judi Wineland had climbed Kili with their teenaged daughters too. www.thomsontreks.com)

As with many adventures, of course,  this trip was about more than just getting to the top. For Roland, the eldest in our group, a 71-year-old surgeon, the climb was about showing himself and his family that he was fit and healthy again a year after quadruple-bypass surgery.

For Lisa, a 45-year-old Boston advertising executive who had never tried anything as physically challenging as this, the climb was about bonding with her 17-year-old son John.

Three fit friends in their 50s from Ark. – Bill, Drew, and Steve—simply wanted to test themselves in a new way.

I wanted to do something that would take Reggie and me completely out of our comfort zone (me more than her, as it turned out.)

It took 37 porters, four guides and two cooks to get us and our gear up to the summit and down again over the course of six days.

Balancing baskets on their heads, they raced up the mountain like billy goats so that they could set up camp each night before we arrived.

“Jambo, Jambo,” which means “hello” in Swahili, they’d say as they passed us on the trails or woke us in the morning with steaming-hot mugs of tea.

There is always a risk involved in traveling with strangers, because you never know what sort of people you’ll end up with. But our group bonded quickly, sharing jokes and encouraging one another up rocky, dusty trails that were sometimes so steep, we’d look back down and be amazed at the pitch we’d just conquered.

Perhaps it was the shared goal, or maybe it was the close quarters (our tents were so close that we could hear each other’s conversations), but we all found ourselves confiding intimate details of our lives to each other as the days progressed.

We’d start out early in the morning, talking and full of energy, but after hiking for as long as 10 or 12 hours, we’d be like kids, asking our head guide Wilfrid “How much longer?” till camp. He’d never say.

This was hard work even for Reggie, a high school athlete who’d run a half-marathon a few weeks earlier without training.

We camped most nights at over 12,500 feet. Our hearts beat fast when we stood up. The higher we went, the colder and more barren it got. Each day was harder than the one before. At many points, the trails were rudimentary at best.

But nothing really prepared us for the final push to the summit. We left camp just before midnight, with only our headlamps to guide us. It was so cold that we could see our breath.

“Pole, Pole” (“slow” in Swahili), the guides kept telling us as we made our way around switchbacks and up sand slopes that were as steep as a ski mountain. We were walking so slowly that we looked like sleepwalkers.

I’d hoped Reg and I would make it to the summit together, snapping photos of our triumph. But life with kids, whether on a mountain or at home, seldom turns out as planned. Reggie reached the summit late that morning with another climber and a guide far ahead of me.

Beyond exhaustion, I stopped 300 feet lower, at Stella Point.

We congratulated each other later. “I’m really proud of you!” Reggie told me.

As the climb progressed, we became two equals seeking a goal rather than mother and daughter. I helped her when she was altitude sick; she unrolled my sleeping bag for me at night when I was too exhausted to move. I reveled in seeing my daughter as a young woman up to any challenge. She’d never seen me push myself so hard physically. By the time we got back down that mountain, We respected each other in new ways.

In the years since, we’ve each looked back on how we navigated that challenge when we’ve faced tough situations. We showed each other we’d always have each other’s back—as adults.

So what if we didn’t get that picture together.

We came home with what really mattered.

I must  be crazy.