Cruising when the sun doesn’t shine 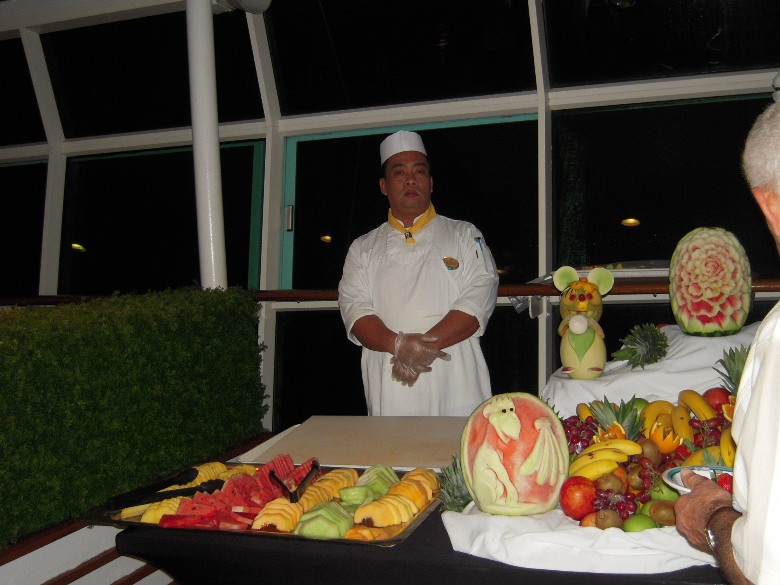 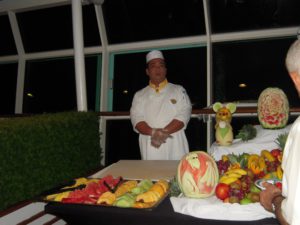 Late night buffet on the ship

DAY 2—It’s not the weather we imagined on our trip to Bermuda.  The seas are rocking.  It’s pouring and the waves are high.  We get sprayed standing on our little balcony.

Good thing there is so much going on indoors. This is after all a veritable floating city with morning ‘til night activities for kids as well as adults.  It seems a lot of people are celebrating on this cruise—95 other birthdays, 76 anniversaries, and seven honeymoon couples. There are activities every hour—an Abs Burns and Thighs class at 9 am in the gym or maybe rock climbing.  A movie in the theater, a seminar on detoxing for health and another on using a digital camera.  Bridge, table tennis tournament, a Line Dance Class. There’s play time for toddlers with Fisher Price toys and organized activities for older kids, whether they are three or 13—that’s all assuming the rocking ship doesn’t bother you!  And that’s all before noon!

Our group opts for hot tub, nap, and then Broadway trivia at 12:30 pm.  That’s another nice thing about cruising with an extended family–on a ship there is plenty to entertain everyone.  You don’t need to be in lockstep or do the same thing all the time.  That helps a lot when the age range is twenty something to eighty something.  I also like that you don’t need cash (except in the casino).  You just have to be mindful of how often you are signing those receipts to your room for tee shirts, drinks, specialty coffees, sparkly tee shirts, and bracelets.

Some cruises may have 1,000 kids on board–this one has 176 , including 25 under three.  In fact, says Adventures Ocean Manager Mauricio Hernandez, more than half the kids on board are nine and younger–a third five and younger.  It’s unusual to have so many young children—though there is in- room babysitting (at an extra fee) and even a special Fischer-Price sponsored playtime daily with the latest toddler toys. This isn’t a school break week.

John and Colleen Spicer are cruising from Philadelphia with their daughter Johanna, a toddler. “It’s great fun to see her experience all of this,” says John. “Sure we could be in a hot tub with a glass of wine, but look at that smile!” says Colleen, adding that the buffet provides plenty of food choices and the staff couldn’t be more accommodating. “And it’s a lot more fun than being at work.”

And despite the crew’s best efforts, some youngsters want nothing to do with the organized kids’ activities.  That doesn’t matter to parents like Dena Tapler, cruising with her four and six year old sons and her husband from Gant, NY.  “I’m not cooking or cleaning or doing dishes,” she says.  “It’s relaxing” she adds.  The added plus: Time to focus on her sons without being pulled in different directions by household chores and other responsibilities. “They have my attention, and they are very content with that, and I am too.”

Despite the rain and rocky seas, the cruisers aboard Explorer of the Seas seem to be happy campers, whiling away time at the bountiful buffet at the Windjammer—should it be Thai Soup, Indian Rice, or a turkey sandwich? Reading in the library, indulging in a spa treatment, working out (though I found the boat too rocky for me—or was it just an excuse!)

Each day is a different theme for the kids and teens with six to eight year olds becoming circus performers for the afternoon “Circus on the Seas,” nine to ll year olds playing Human Bingo and Scrabble, the three to five year olds pitching a tent and eating marshmallows and the teens—should they choose to participate—having a foosball championship. They don’t participate in the activities too much, acknowledges Henarndez, despite their first-rate teen club. “They come make friends and leave with them.”

As long as they are happy and safe, that is all that matters. There is even a group of home schoolers on board, I learn, and at least three different family activities a day—family Karaoke, bingo, and arts and crafts are always big hits, says Hernandez, at 28 nearly a five-year veteran of these youth programs.  Kids also have the option of eating with the counselors and staying with them during port days, which many parents—particularly of the younger cruisers—take advantage of.  “It’s not just babysitting,” says Hernandez, who with his staff of 13 keeps them busy and occupied all day and evening, maybe learning a thing or two along the way. (Did you know that before going to sea, Caesar was afraid of the ocean?)

As for our group–we spread out this afternoon–some spaing, some working out, some wine tasting, a trivia challenge here, a book there.  It’s nice that everyone can go in their own direction and then meet up again for dinner and compare notes.

Now if only the weather will improve!