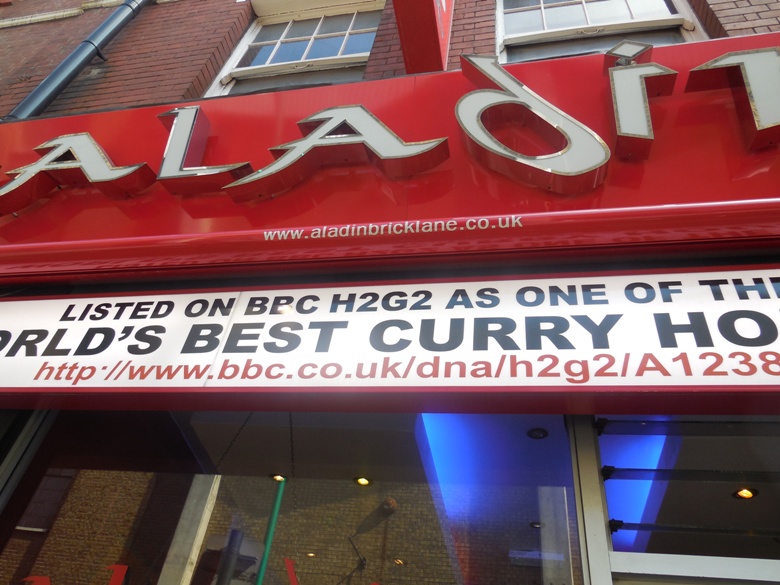 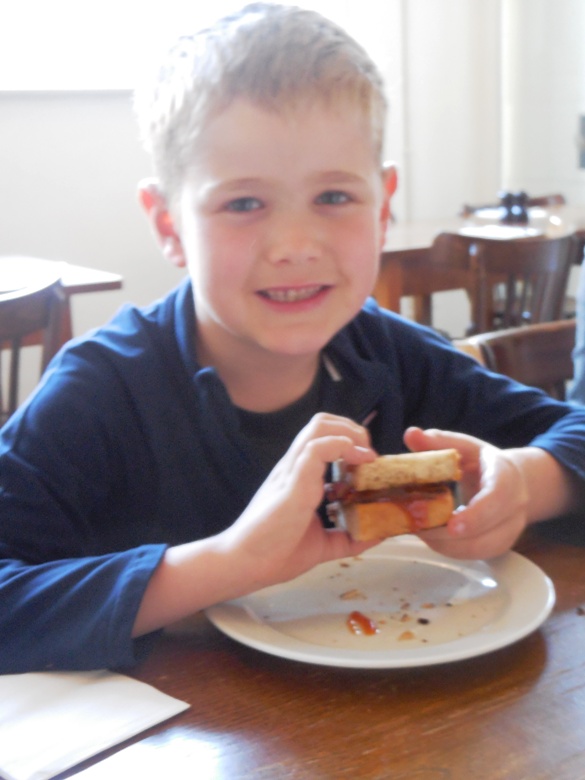 Ned and his bacon sarnie

These weren’t just any bacon sandwiches, or bacon “sarnie” as they are known here in London. Here at St John Bread & Winein London’s East End they are supposed to be the best bacon sandwiches in London with bacon that comes from a certain farm and served on grilled home made bread, says our guide Emily Portsmouth who is leading us on an eating history tour of London’s East End.

The East End famously was home to immigrants for centuries—French, Irish, Jewish, and most recently Indian (the famous Brick Lane lined with Indian curry restaurants is here). There are also hipsters and artists — the area is as famous for its street art and pop up shops these days. 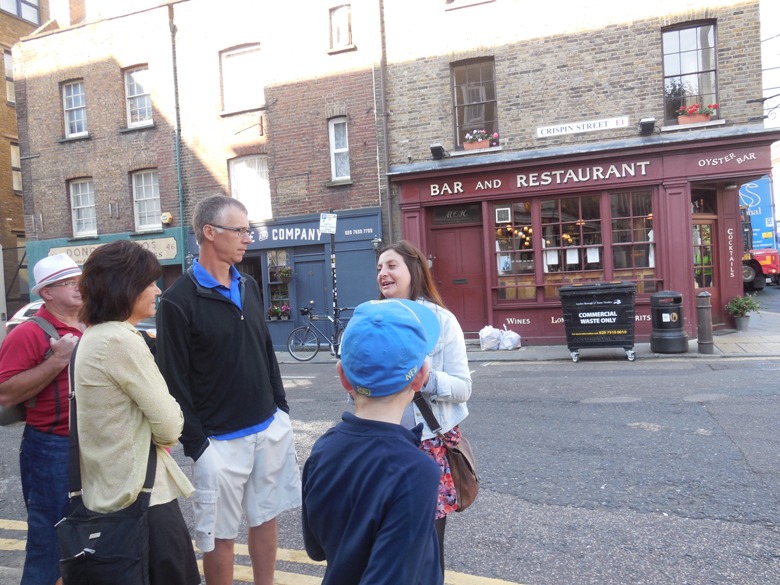 On the food tour of London’s East End

Ned, traveling with his mom Anna from New Zealand, is game to try most of the food this morning. “It’s fun learning about food,” he says. His mom opines that a tour like this makes history more interesting for kids. For adults too, I think. The group comes from around the world for a literal different taste of London history away from the major tourist haunts.

We all give a decided thumbs up to the bread and butter pudding at The English Restaurant, owned by Kate and Peter Swindon who have been here for two decades—literal pioneers in the resurgence of this neighborhood, their restaurant housed in a 17th Century building.   We learn that this traditional English dish dates back to the 13th Century when it was called “poor man’s pudding” because poor people steamed stale bread, adding a sweet or a savory and then baking it. Here, it’s prepared with homemade brioche and served with a custard sauce. Delicious!

In this neighborhood, Jack the Ripper preyed on his victims, and as recently as 20 years ago this was a red light district—the oldest red light district in Europe, Portsmouth said. “There is so much history and so many cultures that have come together here,” she said.

She pauses in front of what once was a place where poor Jews would be given a free meal. Portsmouth tells Ned that when it came time to get a free meal, the more kids you had, the more food you’d get so children would go through and then go through again and again with different families. As recently as the 1950s, 1,500 people were being fed daily; it didn’t close until 1982.

At one point, there were more than 135,000 Jewish immigrants here. Now all that is left is the very small Princelet Synagogue, one of the oldest in the UK and the very famous Beigel (that’s the way they spell bagels here!) Bake that is open 24-7 and where we are treated to a bagel with “salt beef” — what we’d call corned beef—and spicy mustard.

We pass another building now owned by the London School of Economics which served as a shelter for women and children at the second half of the 19th Century — The Providence Row Night Refuge — and Artillery Row, so named because King Henry VIII used it for target practice.

We peer down the tiny alley street. ‘The East End was thousands of small alleys,” said Portsmouth gesturing upward at the odd bricked up windows. Why? The fewer the windows, the less tax people paid. 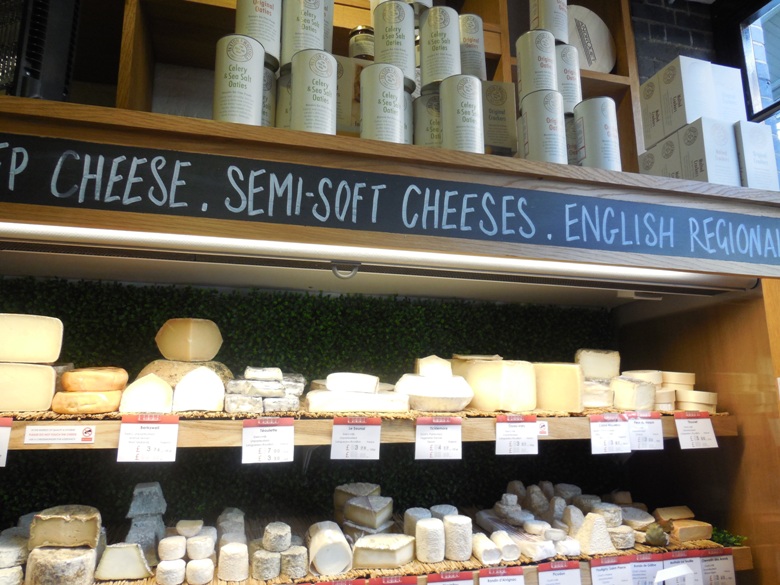 Spitalfields Market — today lots of shops and stands — dates back to the 13th Century (there is a sculpture of a fig and pear). It didn’t close as a food and vegetable market until 1991. At the market, it’s time for more food — this time local artisanal cheeses at Androuet. Seven hundred different cheeses are made in the UK but more than half of the 1.9 billion cheese industry, we learn, is cheddar.   We taste some as well as famous Stilton, which young Ned isn’t too fond of.

He’s pleased when we stop at Poppie’s Fish & Chips, which has been voted top fish and chips in the UK and has been a fixture here since 1952. Poppie — Pat Newland — tells me he has lived here in the East End his entire life.   The secret to his fish and chips? “Quality ingredients,” he says. “You can’t put something bad in the pan and get something good out of it.” 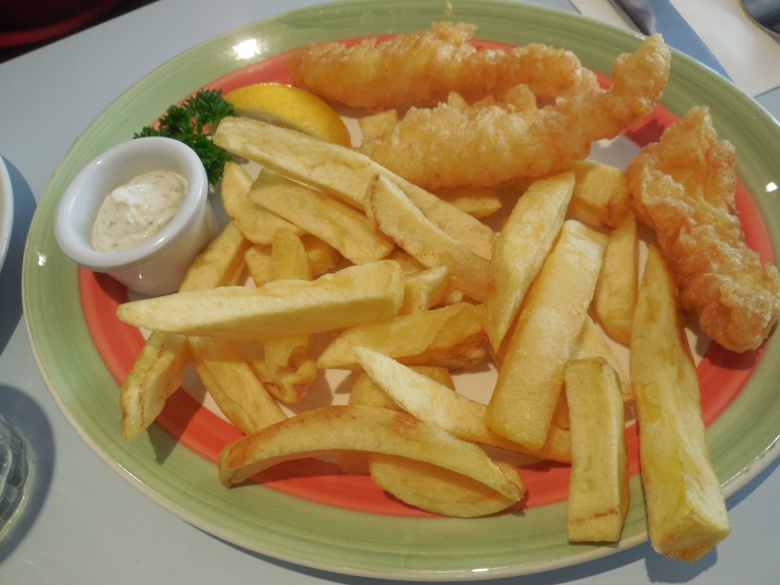 We learn the history of fish and chips: A 13- year-old named Joseph Malin first sold it from a tray hanging on his neck in 1860 and then opened the first fish and chips shop here.

This wouldn’t be a food tour without a stop at a Pub — Public House, this one called the Pride of Spitalfields and with its resident cat Lenny, who we learn, has his own twitter feed. There are more than 55,000 pubs in the UK — family friendly with couches and rugs . We taste hard cider — but here it is just called cider.

Brick Lane today is the heart of the Bangladeshi community and the Curry Capitol with some 56 curry restaurants just on three blocks. “And every one will tell you they are the best,” says Portsmouth, adding that here, people eat curry take out the way we might order pizza or Chinese takeout.  There are more Indian restaurants than fish and chips. We try a mild vegetable curry, a spicier lamb and an even spicier chicken, all served with Fresh baked nan.

We stroll past all kinds of street art, a giant bird on one building, a painted car, the area called Shoreditch, where some 60,000 artists live and work . Check out the pop up stores in Box Park — recreated from shipping containers into trendy tiny shops.

The tour ends with salted caramel cake at the uber trendy Pizza East.

But that hasn’t changed Ned’s mind about his favorite taste. He’d have more bacon sandwiches, please.