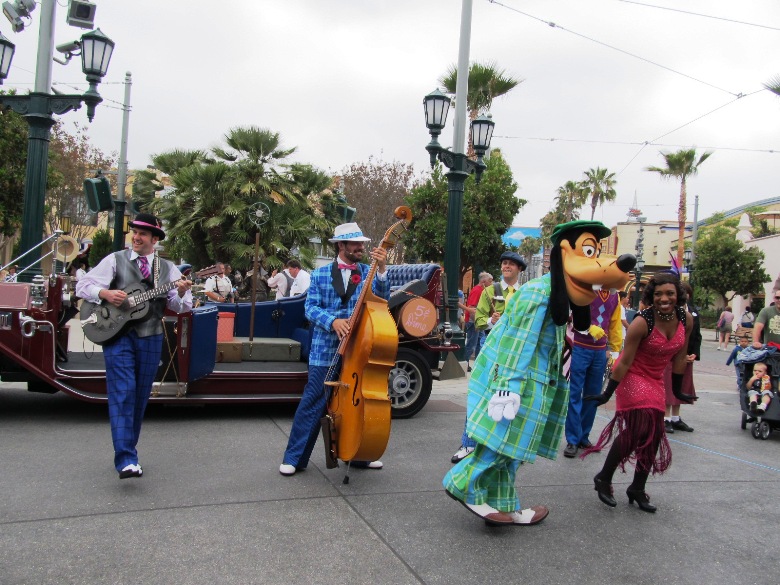 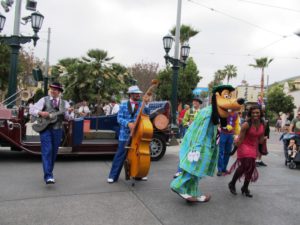 DAY TWO OF FIVE — Who says a theme park visit has to be stressful?

It is mid afternoon at Disneyland and the Hazels are relaxing  away from the theme park fray. They’re enjoying complimentary snacks and beers as well as stellar views  at the E-Ticket Club at the newly refurbished Disneyland Hotel .

“So much more relaxing,” says Shawna Hazel, here on her first “family” trip with her husband and two stepdaughters Lili, 13, and Julie, 7.

The Hazels, from Gonzales Ca, have paid $125 a night for access to the E-Ticket Club on the 11th floor of the hotel’s Adventure Tower which includes breakfast, food and snacks all day and a prime viewing spot for the evening fireworks

“We’d spend so much more on food otherwise,” says Brian Hansberry, here with his wife and three kids from Salem Oregon. Another plus, son Sean, 8, has a dairy allergy and with the staff here in the know, it is no trouble to have food on hand he could eat.

“The kids love it,” Rachel Hansberry said.  Indeed, they were loading up on Goldfish and juice to take back to their room. “When we’re tired, we can just come back here from the park and eat a snack.” The before-dinner appetizers were so bountiful, she said, they were able to feed the kids dinner. “Definitely this removes a lot of stress,” said Brian Hansberry. Another plus: with a quick breakfast the kids can serve themselves, the family can get to the parks early.  “Even paying for this, we’re spending a lot less on food than we did two years ago.”

This is a good time to visit Disneyland. Not only has the Disneyland Hotel been completely renovated (love the new water playground!) but  Disney just unveiled the new Cars Land, based on the movie “Cars,”  evening water spectacular and other entertainment at the grand reopening of California Adventure.

Downtown Disney District –the 20-acre avenue just outside the Disneyland Hotel —now features 50 venues from a giant interactive LEGO store and Build-a-Bear Workshop to movies shops (the World of Disney is one of the largest Disney stores anywhere—40,000 square feet) and restaurants (Take your pick of strolling mariachis at Tortilla Joes, pastries at the well known La Brea Bakery and Café, Tapas at is Catal and pizza at Naples Ristorante).

That’s if the kids want to leave the pool at the Disneyland Hotel with its waterslides. I love the historic touches throughout the hotel. I love the lighted fireworks in the carved panel over my bed of Sleeping Beauty Castle; The Frontier tower has a scale model of Big Thunder Mountain Railroad in the lobby.

At Trader Sam’s Enchanted Tiki Bar, named after Trader Sam, Disney’s Jungle Cruise “Head Salesman” tells the story of his travels with memorabilia he has collected.  The place was jammed the evening I was there with families listening to the live music and gathering at the outdoor stone fireplace.