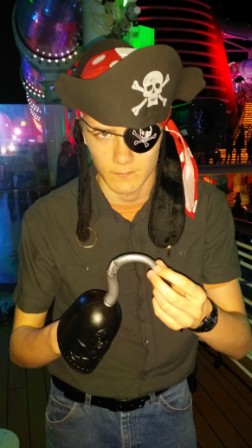 When I told my 8th grade friends we were going on a Disney cruise over Spring break, I got some crazy looks and comments like “Isn’t that for really little kids?” A fair question, and one I asked my parents since years ago, like Andy in Toy Story 3, I’d shelved masters of infinity and beyond Woody and Buzz Lightyear. Now I like to travel the cosmos with physicists Steven Hawking and Brain Greene.

But my parents shared with me all the cool activities onboard the massive Disney Dream ship that was like a floating hotel resort.  The water slide that swung out over the sea, a deck dance party, lots of food and ice cream and this club area just for teens called Vibe. So I felt pretty good about taking my first cruise on a Disney ship for three days.

My first glimpse of the ship was a majestic sight. From the bus you could see many decks stacked atop each other. Fantasia’s Mickey Mouse and his dancing broom friends were on the ship’s outside hull. When we stepped on the ship after passing efficient boarding and traveling regulations staff, we were instantly greeted by cheering staff in an elegant main hall like a palace. In the center was a bronze statue of Donald Duck. When we got to our stateroom our luggage was already there.  We stood on our balcony and felt the mild breeze, smelled the salty air and watched Port Canaveral’s NASA rocket tower shrink as we headed out to sea.

Immediately after a mandatory emergency safety meeting on the deck, my dad and I went exploring the 14 passenger decks. The many services onboard the ship included fancy dining restaurants for families or just adults; a helpful guest services desk for any information or extra service one may need; sports recreational areas including a jogging track, health club and basketball court.  My favorite outdoor activity was the swimming pool and AquaDuck, a clear water slide extending off the top deck over the water named after Donald Duck.

Indoor entertainment for families I liked were the movie theaters featuring new Disney released films and professional theatrical shows with your favorite Disney characters teaching meaningful life lessons in a beyond-creative way.  The onboard, mystery solving art game was a fun way to learn about the ship.  After our tour, it was clear that in just three days we would only get a taste of everything available. I decided that my main activity in the evenings would be dinner, catching the nightly stage show and then heading to Vibe (open till 1 a.m.!).

I can honestly say I never had a bad meal. I liked my filet at Animator’s Palate restaurant, and the restaurant’s wall artwork. The drawings were like you would find in a Disney animator’s studio. Video screens show the work of artists actually drawing during dinner. A pretty creative dining room, the pillars were giant pencils and paint brushes.  Cool dude turtle Crush from Finding Nemo talked to diners.

The Golden Mickeys stage show was like the Oscars for Disney characters. The well directed musical had songs by numerous Disney characters each winning an award. Characters from movies included Snow White, Tarzan, Lion King, and Toy Story. The entertaining show’s message basically communicated that you can achieve whatever you wish by how hard you work and never giving up on your dreams.

Then off to Vibe! I confidently strode to the teen center making new friends and having good laughs playing Mario Kart and Mario Party 9. Hanging out in the neon-lit club with TVs, dance floor, music stations, couches for conversing, video games and its own outside deck was really cool.

Our second day began eating a hearty buffet breakfast outside while in port at Nassau. We could see the famous hotel resort Atlantis from the deck. We spent a little time exploring the town of pastel colored shops, hotels and government buildings on the crowded streets. We saw a horse wearing a flowered straw hat pulling a white carriage. After a satisfying hour of walking through the sun-drenched town, I relaxed reading in the stateroom before the Disney Villains stage show.

The highlight of the evening was meeting new friends for dinner (my parents were going to Palo restaurant).  Two teen boys Josh and Nick joined me for dinner at the Enchanted Garden.  We talked about sports, mostly hockey (I’m a Blackhawks fan). We also told elaborate riddles and jokes to each other and the waiter. Through this experience, those at Vibe and throughout the ship I’ve decided that the Disney employees are all incredibly friendly.

Our last day on the Disney Dream was split between exploring Disney’s private island called Castaway Cay and having onboard fun. We wanted to enjoy the most natural environments at Castaway Cay so we rode bicycles, hung out at the beach and fed the sting rays. The rays were surprisingly very social and came to you quietly gliding along the sand bottom and over your feet. They feel soft, and are gentle. We fed them in U-shaped structure called a buffet table that allowed them to swim past and eat food from your hand and swim out!  The food was a rectangular Jello-like substance made of squid and pieces of fish. We then snorkeled with the rays inside their large lagoon pen. The females are larger than the males, and one big girl about three feet wide is named Megatron. We had a quick barbeque lunch and took to the bike trail partially on an air strip and winding through tall brush, mangroves and bamboo to a three-story observation tower. From the top, we had a nice view of the island’s ecosystem and the giant cruise ship.

We spent the afternoon and night around the pool and AquaDuck where you ride on rafts at a medium pace in the water slide’s tube looping the deck and out over the side of the ship giving you a cool view of the water beneath.  After a chateau Briand dinner at the Royal Palace restaurant we dressed up like pirates for the ship-wide, pirate party with fireworks, a funny swashbuckling play, and watching Pirates of the Caribbean on a giant screen under the stars.  But I wasn’t done partying. Afterwards, I headed to Vibe for a final night hanging out with my friends.  We traded phone numbers and emails so we could keep in touch after the cruise ended the next morning back in Cape Canaveral.

When back at school, I told my fellow 8th graders that they have to try a Disney cruise to see what great fun and immense learning of the experience it is. I confidently told them that, just like my family, they would have fun memories that will last a life time.  And guess what movies I watched when we got home? Fantasia, The Incredibles and Finding Nemo. You never outgrow those Disney classics.

To join William on other trips he’s taken with his family, check out his travel journalist mom Kit Bernardi’s website http://www.KitTravels.com.