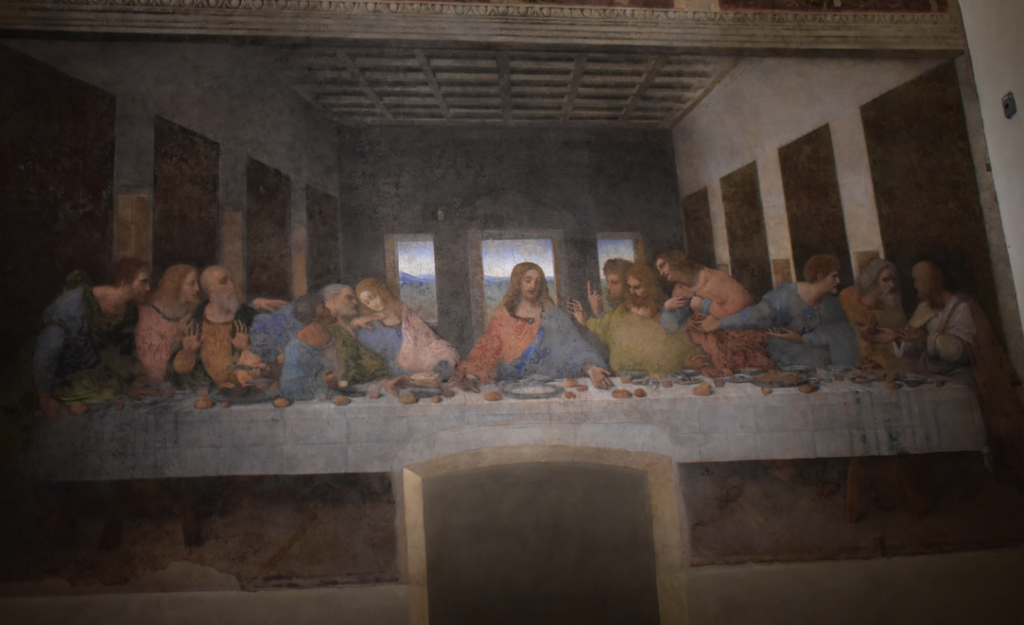 The original Last Supper by Leonardo da Vinci in Milan

MILAN, ITALY — Ready for a challenge?

Besides the Mona Lisa, The Last Supper and other masterpieces, Da Vinci designed a self-supporting bridge, flying bicycle, life sized mechanical lion, musical instruments and much more. He left thousands of pages of his designs and drawings.

“He was really smart,” Ben offered, as his effort to construct the bridge crashed with a loud clatter.  A top site in Milan, of course, is The Last Supper, painted between 1494 and 1497 in the Convent of Santa Maria della Grazie.

The famous painting on the wall has been so damaged over the centuries that just a small number of visitors can be admitted at a time and only for 15 minutes. The huge mural depicts the Last Supper when Jesus tells his apostles he has been betrayed. Da Vinci had studied anatomy and his depiction of gesture and expressions inspired artists ever since.

Da Vinci used an innovative technique that allowed him to paint on a dry wall—the idea was he could continue to revise his work. But it has badly deteriorated over time and in some cases, efforts at restoration made it worse.

That is where this museum comes in. Especially for families, this museum should be a must-see before visiting. It is in the heart of Milan at the edge of the famous covered Galleria, called “Milan’s Living Room” because of its shops, cafes and restaurants that have been a fixture for a century and a half.  (Kids and adults alike here stop at the mosaic bull in the floor— apparently twirling on the testicles of the bull brings good luck and adults and kids alike each take a turn, giggling. This is such a popular pastime, our guide says, that  the mosaic must be repaired every two years. 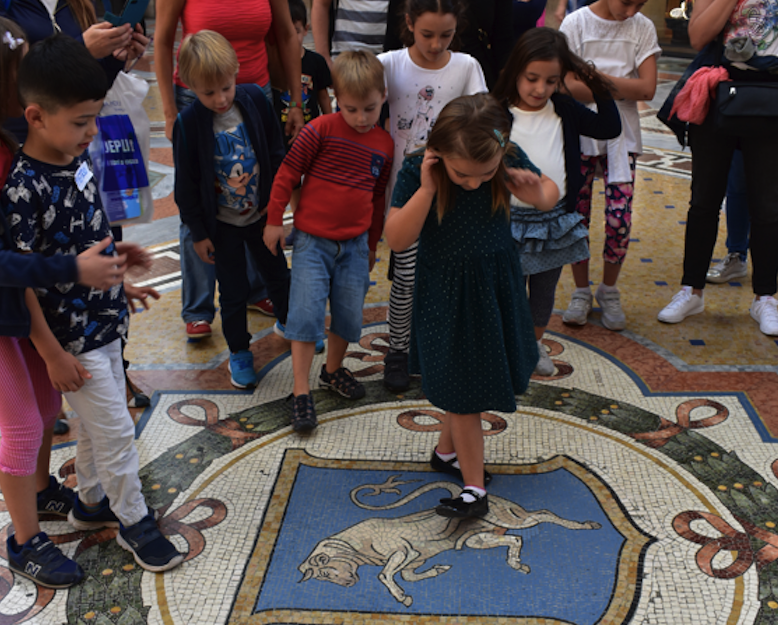 Kids twirling on the bull mosaic in the Milan Galleria

Milan is Italy’s financial and fashion capitol yet there is much here to appeal to kids as well as adults – pizza every which way including the panzerotto, a kind of sweet or savory sandwich so popular (and less than $4) there is typically a line out the door. There are mounds of different colored and flavored gelato, pasta and more. Tables spill out of restaurants onto the cobblestones where people eat pizza and pasta, drink wine and espresso (if you order cappuccino after a meal that will identify you as a visitor immediately, our guide tell us—cappuccino is for breakfast!).

There are many museums but, as Lonely Planet suggests, it seems fitting that  the city where Leonardo Da Vinci did some of his finest work is home to the National Museum of Science and Technology, Italy’s largest science museum housed in a  16thcentury monastery and including some models based on Davinci’s sketches.   Outdoor hangers house steam trains, planes and even Italy’s first submarine. 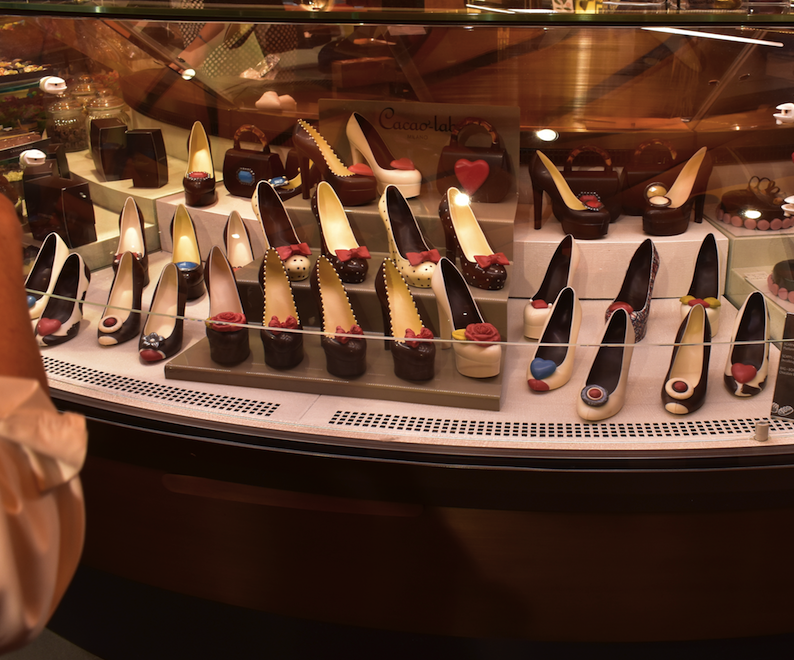 After touring the museums, go to the top floor of the Rincente department store, the first in Italy, where you can take your pick of sushi, the mozzarella bar, sandwich bar, pastries… and see the spires of the duomo up close. Buy local cookies or chocolate. The foodies in your family will llove exploring here!

We are on the first few days of a Uniworld River Cruise that starts with a stay in the Grand Hotel Rosa, ideally located just behind Milan’s famous Duomo and walking distance to many sites.   like that the hotel offers free cell phones with Wi-Fi and programmed with maps, emergency numbers and more.

I’m usually not one for group tours but it is certainly nice to be met at the airport and have smiling guides to answer every question, offer guided tours and even tickets for the tram and subway.

This is a family trip in that there are adult family members traveling — father and grown daughters, son, daughter-in-law and elderly mom, sisters, brothers.  Uniworld also offers Generations tours for those with younger kids with special excursions.

For families who have planned to see the last supper, visit the World of Leonardo first (less than $15).  Not only can kids try to create the Last Supper on a giant computer screen, one click for the scaffolding, another for placing the strings Da Vinci used to put Jesus in the middle, painting the background and windows, the plates and goblets on the table, the famous faces and expressions last.

They can see how vibrant the colors would have looked in Da Vinci’s time. They can make Da Vinci’s sketched come to life; explore why the Mona Lisa, in the Louvre in Paris is so arresting (why is it her eyes seem to follow you?). 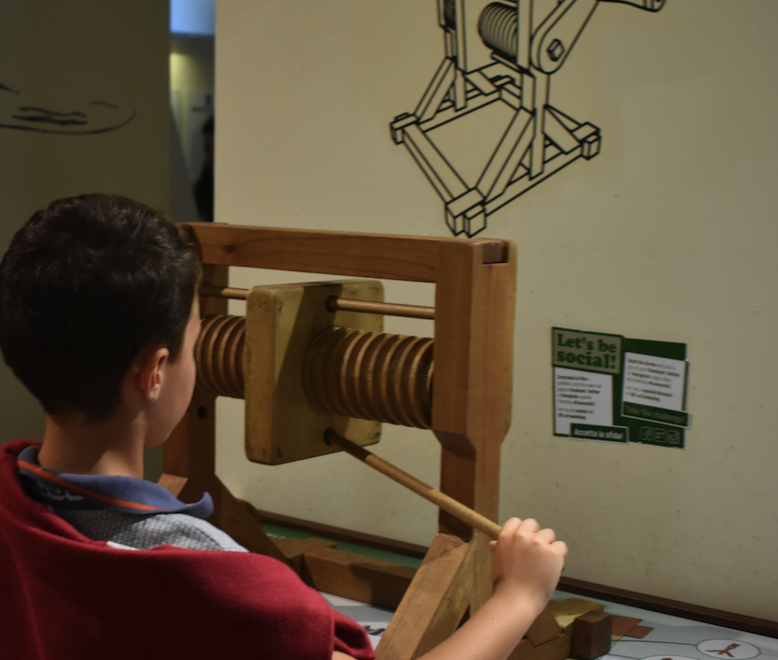 Other interactives allow you to explore some of DaVinci’s  other inventions—the self supporting bridge, for example, is designed of circular beams assembled without the use of any fastening. How is that possible? Once assembled, the pressure exerted by the bridge’s weight allows the long beams to block the other ones, preventing the structure from collapsing, the signage explains both in English and Italian.

Kids of course get a much better understanding of Da Vinci’s genius here. “It’s the process, the making of it,” Ben Hofmann explained.  “Much different than just looking at it.

The huge Mechanical Lion was built to walk before the King of France. There is a flying machine in which a system of pulleys and levers would make the wings flap—the way a bird would flap his wings. There is a round multi cannon gunship, among others.

The lifesized models are placed alongside interactives that allow visitors to explore Da Vinci’s drawings and to see how the designs work, helping adults as well as kids understand his genius.

Children’s books can help too — like Milan Playing with Art by Sabrina Carollo and Barbara Bongini with cartoon drawings of two youngsters touring. The Galleria Vittorio Emanuele II was first built, the book explain , to protect people from the rain while they shop.

In the famous La Scala Opera House, headquarters of a chorus, two orchestras and a classical ballet school, kids are advised to look at the giant chandelier with more than 400 lights made of blown glass. Before electricity, the chandelier had to be lowered to light all its candles!

There is a children’s workshop at La Scala—a circle of kids were creating flags while we visited.