Five ‘uncruise’ vacations you may not have thought of 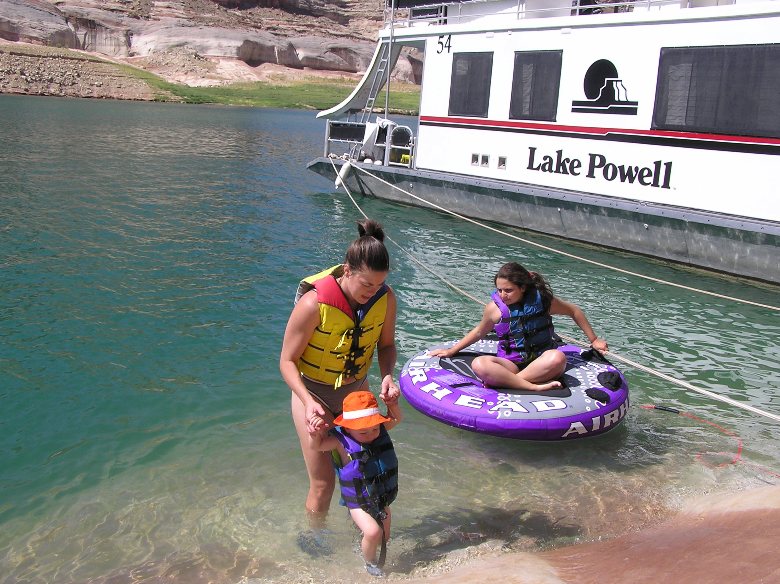 Our houseboating adventure on Lake Powell in 2004

That’s what it sounds like when the glacier breaks off into the ocean.

We’re in Glacier Bay National Park huddled on the bow of the SeaWolf, a 97-foot, fully-restored World War II mine sweeper, watching and listening as pieces of Johns Hopkins Glacier calve off and fall into the water.

It is rare to get this close — within a half-mile — and we watch for nearly an hour, leaving only when the SeaWolf’s captain, Kimber Owen, tells us we must, or we’ll be stuck there, surrounded by ice as the tides change.

Unlike the big cruise ships we can see in the distance, we have no set schedule aboard the 12-passenger SeaWolf so we can stop at will. We kayak every day and watch as the teens pick up chunks of iceberg to use as ice cubes later. The Black-legged Kittiwake — a species of seabird — scream from the cliffs to bald eagles nearby, hoping they’ll vacate their nests and leave their chicks and eggs alone, vulnerable to poaching.

We have no cellphone service, TV, Internet or video games onboard and after the initial shock, the kids — there are seven on this trip — don’t seem to miss it. There isn’t even electricity after 10 p.m. when the generator is shut off.

“I hope after this experience kids will start to look at their own environment differently and see how they can make a difference,” says Owen, who has outfitted the boat to be handicapped accessible, so even those with physical challenges can enjoy a unique adventure.

Humpback whales jump right in front of our boat, dozens of harbor seals sprawl on rocks — and an amazing marine ecosystem (ever make a doll out of a 20-foot bull kelp?) is exposed by the dramatic tide swings. We’re even given a chance to follow a bear’s trail and explore an ice cave.

Later this summer, we’ll enjoy more creature comforts but just as much adventure when we explore more of Alaska’s Inside Passage aboard InnerSea Discoveries’ 76-passenger Wilderness Discoverer as well as kayak, fish, hike and get as close as we can to Alaska’s spectacular wildlife. Wildland Adventures helped arrange the trip. (Check out their family trips in Hawaii, as well. AdventureSmith Explorations, is a good resource for small ship adventure cruises around the world, including designated family departures, which means families with kids of similar ages travel together.) Such trips, while they may cost more than conventional cruises, allow you to cruise close to shore and stop in remote locations and smaller ports, and also include all of the shore excursions — led by expert naturalists — that can double the price of a conventional cruise, especially in Alaska.

That’s not to say big cruise ships aren’t a lot of fun—they are!—and often a good deal. But if you are looking for NEW ways to reconnect with your kids and with nature around water this summer, here are four other un-cruises you may not have thought of. In some cases, you’ll pay more for the unique experience, but other options may turn out to be a bargain, especially when you gather friends or family to share the adventure. Check out the special Taking the Kids 51 Summer Family Vacations section for more ideas.

HOUSEBOATING on Lake Powell. Imagine being in the middle of nowhere without another family in sight while you explore the biggest water playground the kids have ever seen. When they’re not pushing each other off the water slide on the deck of your floating vacation house, there’s Jet Skiing, wakeboarding or rocks to jump off of into the water. Cruise through spectacular sandstone canyons on the border of Arizona and Utah — there are nearly 2,000 miles of coastline — or swim, water ski, fish, explore side canyons and camp on the beach. (Houseboating.org gives you options around the country. Many boats sleep 12 or more. Check Houseboating.org for half-price deals for June.)

RAFT on the Middle Fork of the Salmon, the Green River, the Colorado through the Grand Canyon. You can chill and take in the scenery or experience more thrills than you could have on any roller coaster as you go through the rapids. Some rivers, like the Green in Utah, are mild enough for kindergartners, others are better for teens. You’re guaranteed to be unplugged, there’s no cellphone service, so relax and let the guides do all the work, including preparing sumptuous meals and engaging the kids. Check out special family trips from companies like OARS, Western River Expeditions, ROW and Dvorak Expeditions, which even offers some kids-free trips.

SAIL AWAY on a charter yacht from Moorings or Sunsail with or without a captain and crew. (My family prefers a “just us” adventure where we decide when to anchor, which beaches to explore and where to snorkel.) This summer you can sail from Annapolis, Md., on the Chesapeake Bay. Or consider the British Virgin Islands where last winter we spent a week sailing, snorkeling and diving. (Here’s what I wrote about that adventure.) It’s among the best boating destinations in the world. Book by the end of May for deep discounts. Weekly charters for a boat that can sleep six can be had for under $3,000. What I love most about sailing this way is that we must work as a team whether we’re manning the sails or preparing lunch.

Take a WINDJAMMER cruise in Maine, which offers the largest fleet of traditional sailing schooners in North America. Everyone will learn some maritime history aboard these historic schooners. Seven of the 13 windjammers have been designated national historic landmarks and all of the vessels are privately owned and operated. Kids will have the opportunity to help sail and learn traditional skills like knot tying, steering, hauling sails, polishing brass, rowing and cranking homemade ice cream. There’s plenty of shore time, too, for exploring tide pools, swimming, berry-picking, stone skipping and sea glass hunting, as well as a spectacular lobster bake on the beach. A number of the windjammers offer cruises for children as young as five, which feature a little more shore time and plenty of kid-friendly meals and hands-on activities. Go overnight, for several days or a week. Two night cruises start at about $400 per person, all inclusive.

A dozen years ago my daughter Mel, now a college student, and I spent time aboard the schooner Isaac H. Evans. She willingly helped with chores (unlike at home) and ate as much lobster on a windswept beach as a little girl could hold in one sitting — the only time in her life she could do that.

I still smile at the memory. I hope your summer travels — on land and water — leave you smiling at the memories, too.