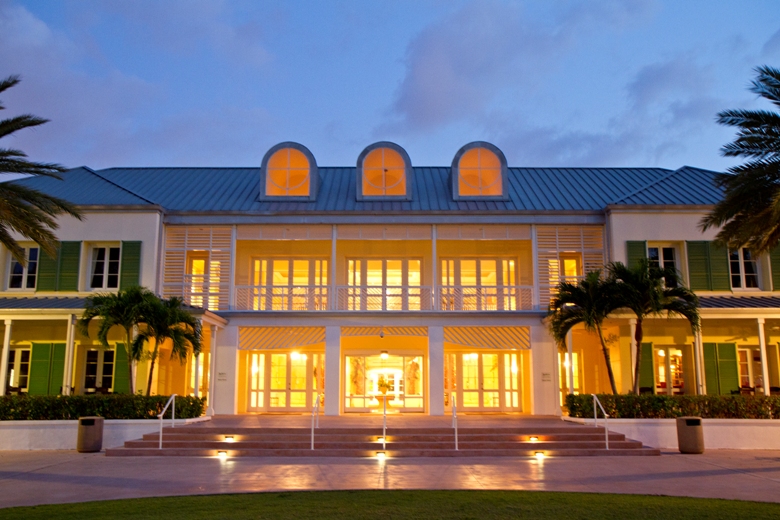 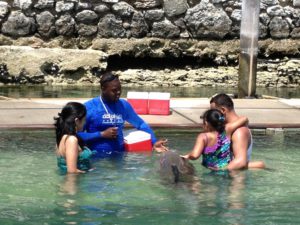 Meeting the dolphins on Grand Bahama

DAY ONE — It’s nice to have a handsome teen as the welcoming committee.

Nineteen year-old Kaholo is so excited to see us that he literally is jumping up and down—in the water.

Did  I mention Kaholo is a dolphin—one of more than a dozen at  the Underwater Explorers Society on Grand Bahama Island, one of the few in the world, in fact, where you can not only interact with these wonderful creatures but swim and even scuba dive with them in the open ocean.

Most people, says general manager Linda Osborne, opt for the Dolphin Encounters.
This is something everyone can do in the family,” she says.  In fact, we meet seven year-old Andrea Padilla, from New York, who is a little skittish at first but then begs to pet Dolphins Goomby and Indy again and again.  We also meet a young woman from France with physical challenges who is able to get in the pool with them too.

“I liked touching them the most,” said Andrea. “Their skin felt like bathing suits!”

“Even if they are scared in the beginning, they end up with big smiles on their faces,” said Tristan Pratt, one of the dolphin trainers here who showed Andrea how to overcome her fear.  “We train humans too,” he joked.

For those who worry about the dolphins in captivity, Osborne notes that half were born here and the others came from another facility that closed years ago.  And the center is accredited by AMPA.  “As far as families go, this is one of the most popular excursions on the island,” she said.

But there are so many other choices here as well and we’re just 55 miles — a 20 minute flight –from Miami.

Ava Thompson is the chief family officer for the Bahamas Ministry of Tourism—that means she helps families decide which island best suits them and what to do when they arrive.  She explains that Grand Bahama Island, home to about 55,000 people, is a nice mixture of city (Freeport) and laid-back island feel. 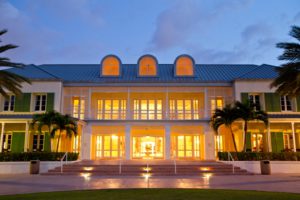 Take your pick of activities—besides hanging out at the beach or the pools, like at the Grand Lucayan Resort where we’re staying.   The Garden of the Groves ,  rehabilitated after being destroyed in the mid 1990s by hurricanes, boasts tropical gardens, waterfalls,  and a historic chapel popular for weddings as well as shops that sell local Bahamaian products—soaps and scents, lotions (Neem) and fabrics as well as hot sauce (Have you ever had goat pepper sauce?) .  There are 13 different tours—from kayaking through the mangroves (there are special seats for young kids), ATV tours (you have to be 25!), jeep tours and just the chance to see all of the birds and butterflies here (we fed the Muscovy ducks!)   Erika Gates, who oversees the Garden of the Groves and the eco tours, said birders love Grand Bahama Island because there are 200 species of birds here including several only in the Bahamas like the Cuban Emerald Hummingbird and the Bahama Woodstar.  “Birders come from all over the world to see them,” she said.

Go to Lucayan National Park that is home to one of the world’s longest underwater systems of limestone caves.  Take a walk along the five mile Heritage Trail with over 30 species of plants, 18 types of birds, butterflies.

Earlier, we met up with some families horseback riding on the beach—in the water.  I can’t think of anything more fun on a hot day.

Except maybe eating.  “Smiling Pat” Hoyt  is a local shop keeper and VIP guide who likes nothing better than taking her guests line-fishing (you tie a line around your finger, throw it in and voila…you get a fish) to cook up for dinner on a deserted beach,  Maybe you’d rather have local lobster.  “We call it candy, because it’s so sweet,” she said.

If you are here on a Friday night, she added, you shouldn’t miss the Fish Fry at Smith Point where locals and tourists alike gather for –what else—just caught fried snapper and grouper along with Bahamaian rice and peas and baked macaroni and cheese—all for just $10.

One thing I really like about Grand Bahama Island is that it is so easy to meet up with locals.  We joined the fun across the street from our hotel at Port Lucaya Marketplace where we danced along with all the kids to live music in Count Basie Square. “This is the place everyone comes on Friday after work,” says Karin Ferguson Bain, who oversees the entertainment here.

While we were there, we got a lesson in making Conch salad  (lots of fresh lime, orange and hot pepper sauce!) and an introduction to  “Gully Wash” — fresh coconut water, milk ice and “with lead” with gin or rum—all served up in a fresh coconut smashed open by machete at Bateman’s Coconut Stand.  Yum!

Patty Wildgoose–that’s her real name—wants to make visitors at home so much that she rolls out a red carpet—literally—when she meets them.  She’ll take you in a boat to a secluded cay where her daughter will cook you a meal she promises you won’t forget served up by her grandson.  (Email her at Paddytaxitour@gmail.com)

I think I will next time.  Everyone should be treated like a VIP on vacation!