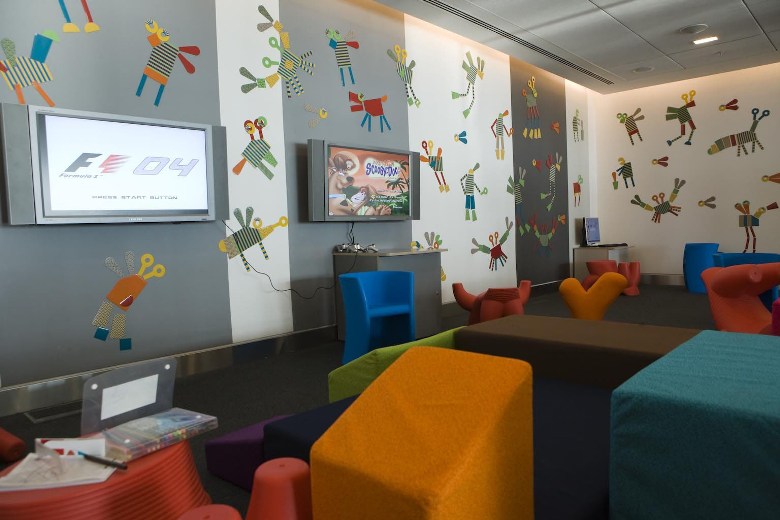 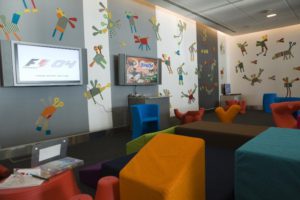 British Airways built a KidZone room into their Terminal 5 facility, the largest in the world.

Pancake, the much loved blue bear, seemed right at home among the oh-so-serious laptop-toting business people. So did his 4-year-old owner, Colin Blodgett.

Colin, Pancake and Colin’s parents were awaiting their flight from London to New York in British Airway’s expansive $60 million Executive Lounges in Heathrow’s new Terminal 5 (www.terminal5.ba.com). And while the other travelers in the lounges for first-class and business-class passengers (as well as those flying economy who had accrued a certain number of miles) were bent over their laptops, Colin was grabbing a snack and explaining that Pancake was so named because he’s “so flat!”

“Certainly you don’t’ want to bother anybody else, but this makes it a lot more comfortable,” said Colin’s mom, Margaret Murray, as she looked around at the comfortable seating areas, the complimentary food and drink and the area just for putting your feet up and watching a little TV.

Other parents were feeding young children from the bountiful buffet (everything from cold cereal to soup, sandwich fixings to chicken curry, cookies and ice cream), reading them stories or just letting toddlers run off some steam before they got on the plane. Teens, including the two I was traveling with, were online.

So many families have begun to take advantage of these lounges that British Airways has built a separate KidZone room into the facility that airline officials boast is the largest in the world. The airline also has a 14-member Kids’ Council — winners of a competition — to advise officials on issues concerning junior flyers (more than 1.6 million last year). Even with their suggestions, parents thought the KidZone — clearly a good first step — needed work. “They could use some more toys,” said Rebecca Henwood, traveling solo with a 4 year old and a toddler, as she watched her 18-month-old play amid the big cushions. She and the kids had been at the lounge for hours awaiting a connection to Hong Kong. “I’m not sure the business travelers are happy about us being here,” she said ruefully.

Truthfully, after visiting several of these lounges in the United States and abroad, it seems as though families and business travelers are able to coexist comfortably. “People have been very kind,” said Christopher Clark, who was waiting for his flight with a 3 year old and 2 year old at British Airways’ Lounge at JFK. “No one has made us feel like we shouldn’t be here.”

All of these families aren’t wealthy, or even flying business class. It’s easier these days to gain admission to these lounges with clubs like Priority Pass (www.prioritypass.com). For an annual fee (starting at $99) and $27 dollars a visit, you and your kids can gain admission to more than 500 of these clubs around the world. You can also purchase a day pass for many lounges in advance for under $30 at www.LoungePass.com, or at the door for a higher fee. (Just make sure the kids will be admitted free. Rules vary.) The membership will likely pay for itself in the food and drinks you don’t have to buy, or maybe just in your sanity, if you end up spending hours at the airport.

THE BEST PART: For a couple of hours, you’re treated royally, with free drinks, snacks, sandwiches (in some cases) and in the case of British Airways and Virgin Atlantic in London — enough food to sustain you on a flight across the Atlantic. You don’t have to sit on the floor to plug in your laptop, nor do you have to worry about chasing a toddler through a crowded airport. “They’ll even fill up her milk bottles for me,” said Rebecca Heywood.

“It’s a lot cleaner too,” confided one grandmother, changing her grandson’s diaper in Delta’s Crown Lounge at JFK.

Older kids appreciated the respite as much as their parents. “It’s quiet and there’s good food,” said 11-year-old Amanda Grossman, from suburban Cleveland, who was waiting at British Airways’ JFK Lounge one night this summer. “I like the comfortable seats!” My teens were glad for the computers and loaded up on snacks to take on the plane.

But parents were mindful of those around them trying to work and lamented the need for more designated family areas with toys and books — like in Virgin Atlantic’s (www.flyvirgin.com) Heathrow Clubhouse, which offers a designated kids’ play area with children’s TV and toys, as well as a separate “games” area with pool table and video games.

In the United States, Continental Airlines (www.continental.com) has designated family rooms at its President’s Clubs in Houston, Newark and Los Angeles with kid-sized furniture and toys. By the end of the year, nine of American Airlines’ Admirals Clubs (www.aa.com) will have children’s rooms in various cities, including Miami, Dallas, Los Angeles and Chicago. They are “designed to address the needs of our members in their attempt to blend their professional and personal responsibilities,” said an American Airlines spokesman.

Of course, all the amenities in the world can’t take away the stress of flying with children, especially young ones, especially on long trips. And it’s still up to parents to keep the kids happy so that they don’t annoy those around them. That includes food (because they won’t want to eat when the food is served and may not like it either), toys (you can’t count on the in-flight entertainment), extra clothes (in case of spills), a sweatshirt (planes can be cold) and a safety seat for young children. (While not required, the FAA (www.faa.gov/passengers/media/childsafety.pdf) strongly recommends in-flight safety seats. Young children who are restrained are safer, and more comfortable, in turbulent skies.

And if the kids are happier, you’ll be too and so will those around you. Whatever happens, keep your cool. It really helps.