How inspiration is producing a badly needed new tourism industry 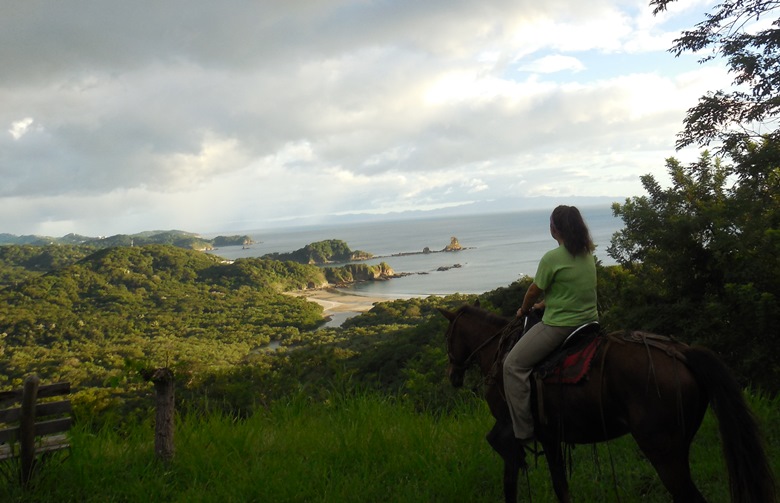 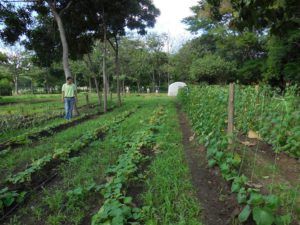 DAY 6 —   Sometimes a vacation is more than a vacation.

A vacation can inspire you to take a different path—or in some cases, inspire a new industry.

The couple, who had arrived from France many years before, owned a tree farm in southwest Nicaragua that happened to be surrounded by nearly 2,000 acres of jungle preserve and included a mile-long stretch of spectacular Pacific beach.  “It seemed a shame not to share the beach,” Claire Poncon said.

So the idea for Morgan’s Rock was born through conversations with the owner of Lapa Rios.  But this wasn’t just another eco lodge—this would be the beginning of an entire new industry in Nicaragua, a country where 40 per cent live in poverty and where President Daniel Ortega has made tourism a priority.

I got to meet the Poncons because my daughter Melanie spent the fall working at Morgan’s Rock with Claire Poncon developing a compost system for the fruit orchard and organic garden to provide vegetables to the 15-bungalow resort that is spread over the vast property.

The tree farm is still here as is a farm with ducks, chickens  and cows as well as horses that guests can ride through the jungle and on the beach where turtles nest.

The bungalows were built from the farm’s wood; the steps (it was 234 from the beach to our bungalow!) from reclaimed wood.

Morgan’s Rock will celebrate its 10th birthday in 2014, and nearly 40 years since the Poncons arrived in Nicaragua (they spent much of the 1980s in Costa Rica, as did many Nicaraguans, because of the civil war here).  Two years after it opened, Karen Emanuel, a London businesswoman, came on vacation at the recommendation of friends.  She was inspired but what she saw and left  owning  an island in Nicaragua.  Three years ago, she opened Jicaro Island Ecolodge,  built using the same architect and the Poncons’ wood.

She took their ideas a step further, —a more luxurious ecolodge where most everything is thoughtfully sourced from her neighbors.  The kitchen’s’ scraps support a pig farm on a neighboring isleta that in turn supports an extended family of 40.  The pigs’ waste, in turn, creates methane gas that the family now uses to cook, rather than wood.

Another ecolodge, Yemaya Island Hideaway & Spa just opened 50 miles east off the east coast of Nicaragua on the Corn Islands, famous for its clear waters and beaches.  Families we met were heading to Ometepe Island, famous for its two volcanos and staying at Totoco Eco-Lodge  at the gateway of the Maderas cloud forest and with its own organic farm and bordering an organic coffee plantation.

Today, some million people a year are visiting Nicaragua a year but the Poncons know there is a long way for the country to go tourism-wise—better training for staff, better education, more and better sustainable tourism efforts. They talk about having tourists come to stay at their coffee farm in the north. Already they arrange for visitors to Morgan’s Rock to visit one of the schools they support nearby and to visit the resort’s farm. Soon, I’m guessing, they will also visit the organic garden my daughter helped create. The first cucumbers and herbs were already being harvested! 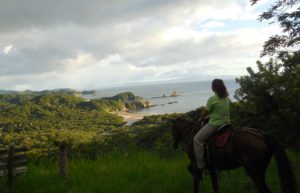 Melanie on horseback ride on overlook of Morgans Rock

I’d almost forgotten it was Thanksgiving Day.  Just before sunset we go horseback riding through the jungle, past the Poncons’ tree farm and out on the beach just as the sun is setting—a spectacular sunset all pink and orange.

As a bow to the Americans visiting, there is a festive Thanksgiving buffet—with a Nicaraguan twist.  There is turkey but also local fish in a shrimp sauce; mashed sweet potatoes but also eggplant and coconut ice cream as well as pecan pie squares.

But already on many lists of must-see places, added Lisa Siri, here with her husband and three young kids from Maryland.

As for the Poncons, they are busy planning what’s next for Morgan’s Rock—and for tourism in their adopted country.  Others will be sure to follow.