A Tumble Down the Mountain 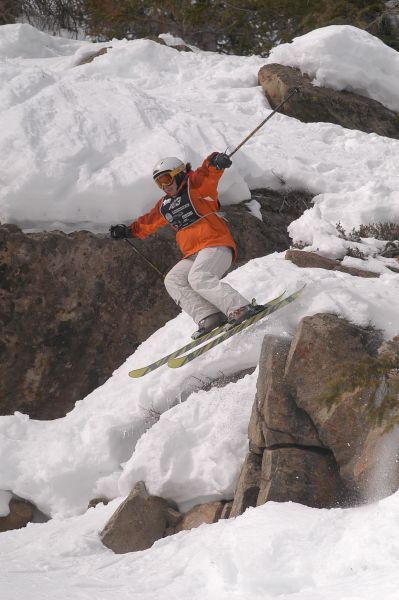 Vacations never turn out as planned.

Today is Melanie’s 17th birthday — and the qualifiers for the Junior Extreme Big Mountain Competition. There are 18 girls and more than 50 boys aged 14-17 mostly from ski towns. We’re proud of Mel for even wanting to challenge herself like this — skiing some of the most extreme terrain in North America.

All Mel wants is to qualify, which means skiing in control down what looks to me like a sheer cliff studded with rocks and boulders! Only about half of the teens who are here will actually qualify.

But luck isn’t with her today, even if it is her birthday. One ski pops off on a rock and she tumbles down this steep slope, head over heels. I arrive — to watch her I thought — just as the ski patrollers are strapping her into a sled to take to the emergency clinic. It’s a pretty scary sight. They have her immobilized because they don’t know if she hurt her head (thank God I’ve insisted on her wearing a helmet since she was a little kid) or broke any bones. They are giving her oxygen.

She’s crying — more in frustration than pain. I tell her she should feel great about challenging herself like this. And when you do challenge yourself, there’s no guarantee how it will work out in the end. Her coach, Wendy Fisher, reminds us that she got badly hurt in the last training run before the 2002 Olympics and didn’t get to compete in her event.

Meanwhile, Mel’s dad and brother were coming for the weekend — to watch her compete.

I ride down the mountain on the back of the snowmobile driven by the ski patroller. Mel is bundled up in the sled behind. In one respect, I can’t believe this is happening — especially on her birthday!

At the mountain clinic, they evaluate here carefully. Maybe the gods were with us after all. She’s not seriously injured — just banged up and disappointed. But no concussion, no broken bones. By Mid afternoon, she’s back in our condo at the brand new Lodge at Mountaineer Square, watching TV.

Some of the family is scheduled to arrive tonight — Mel’s dad, my nephew and his wife from California. When Mel’s sister Reggie, at college in Colorado Springs, hears what happened, she decides to drive four hours to cheer up her sister.

What can you say about disappointment — especially when expectations have been high? Especially away from home?

All you can do is continue to move forward and shift gears if necessary. The reality is people do get hurt and injured on vacation (especially partaking in extreme sports). The reality is when traveling with kids, it seems that parents need to be prepared to shift gears, especially when an illness or injury intrudes on what was supposed to be a perfect getaway. Of course life isn’t perfect — so why should vacation be any different?

It’s funny that I wasn’t really worried about her getting hurt — I was just focused on her qualifying for the event because she so wanted to participate in the competition.

But today really made me remember what’s important.