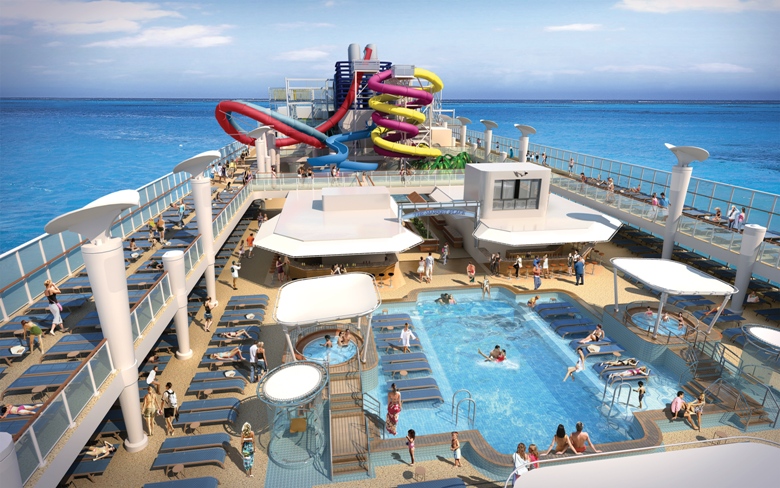 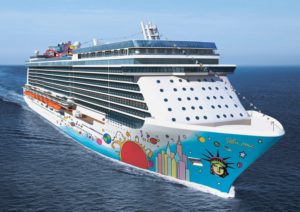 How brave are you?

Brave enough to walk the plank?

If so, you can do that, eight feet over the side of Norwegian’s new ship Breakaway, the largest ship ever to homeport in New York City.

You are guaranteed not to go overboard, of course, and you’re securely harnessed. Maybe you’d rather try the high ropes course or the zip line — right in front of the rock wall.

Join the kids and careen down five multistory waterslides — the largest aqua park at sea.

No worries, if you aren’t an adrenaline junkie. You won’t get bored on this huge ship — not with its huge sports complex that includes mini golf, the spa (there is an entire menu of services for teens, think a fabulously fruity facial or a surfers scrub, pools, including a splash zone for the littlest cruisers, four hot tubs and kids’ clubs, including activities for “guppies” — those six months to 2 years old — which parents can join in for, but are hosted by the youth staff. (Think a special Fairytale Parade, Nursery Rhyme time or babies disco.)

You can see a Broadway show (“Rock of Ages”), laugh through Second City improv skits and eat dinner watching Cirque Dreams Jungle Fantasy. I don’t know which was more amazing — the costumes, the aerialists or the acrobats.

When the kids are otherwise engaged, try out the Ice Bar with its Gotham-themed ice sculptures. They give you a heavy jacket because everything, including the bar itself, is made of ice and the temperature is 17 degrees. There’s a casino onboard too.

Let’s not forget the Nickelodeon characters — Dora the Explorer, Diego and Sponge Bob among them who are on hand to entertain the kids who might have the chance to “get slimed” during their cruise. Did I mention the Rockettes will be onboard once a month for the first six months offering dance classes?

This ship is such a big deal for The Big Apple that Mayor Michael Bloomberg was on hand for the christening earlier this month, noting that New York City welcomed nearly 600,000 cruise ship passengers in 2012. The ship celebrates its NYC connection with bright Peter Max art of the N.Y. skyline and Lady Liberty on the hull. And you can’t beat sailing right by the Statue of Liberty either!

While we were onboard for a two-day look-see before the ship’s inaugural cruise to Bermuda, Norwegian CEO Kevin Sheehan announced that Breakaway’s sister ship, the Norwegian Getaway, will debut early in 2014 from Miami with a decidedly Miami-Latin flavor. “Legally Blonde” will be the musical playing on the ship and world-class comedians will perform every week along with an Illusionairum (ready to learn to do magic tricks?) and the Grammy Experience, with Grammy-winning and Grammy-nominated artists nominating the guests.

Every cruise line is working to up the ante for passengers these days and Norwegian is no exception, trying to be all things for all vacationers, especially families. (See what’s new on other cruise lines on the Taking the Kids 2013 Cruise Guide.)

“Family cruises have really escalated in the last few years,” said Karen Maybury, who oversees all of the youth programs for Norwegian, as she gave me a tour of the Breakaway’s kids’ clubs. It’s not unusual to have 75 babies onboard — and up to 1,400 kids, she said, and most of them join in the organized kids’ activities. (More than a fifth of family travelers recently polled (20 percent) by Travel Guard plan to take to the seas this summer, making cruising the most popular type of vacation.)

Babies and toddlers might finger paint or go to baby clown school with their parents while kids have their own morning-till-night activities. Turtles (3 to 5 year olds) play Slimy Science. Seals (6 to 9 year olds) create their own episode of the Nickelodeon show “iCarly.” Dolphins (10 to 12) compete for the chance to get off Survivor Island, and Entourage is for teens 13 to 17 (street dance or DJ lessons, anyone?)

I especially like the port-centric activities. For example, kids sailing to Bermuda might make kites or giant Bermuda shorts out of construction paper. They’ll play Bermuda triangle games or build cardboard lighthouses. (In the fall, there will be Bahamas-themed activities.)

Kids can even learn circus skills (juggling or plate spinning). “The program has been enhanced to a whole new level,” Maybury said. The day I visited, it was jungle theme day, so counselors were wearing cavemen costumes and had their faces painted, as did the kids, whose faces were painted to resemble their favorite animals. Fun!

And kids with special challenges are not excluded. “Of course, they can participate in a wheelchair,” Maybury said.

That inclusiveness and sense of adventure extends to the food, said executive chef Anil Chinthapatla. There is a separate kitchen for those with special dietary needs and allergies, he noted.

Norwegian, of course, is famous for its “freestyle dining” — you can eat when and where you want and there are 28 different dining options to choose from — take your pick of Ocean and the Raw Bar, presented by celebrity chef Geoffrey Zakarian, Cagney’s Steakhouse, Moderno Churrascaria, a Brazilian steakhouse, La Cucina Tuscan spot or Le Bistro French. There’s Shanghai’s Noodle Bar, Wasabi for sushi and even a gelato bar. For fans of TLC’s “Cake Boss” show there are tempting goodies made aboard ship. Let’s not forget pizza 24/7.

There is one downside to all of this choice is that you need reservations and you have to pay a cover charge at many of the restaurants — as much as $30 a person. The upside for families is that kids 12 and under can go to the specialty restaurants for half price and there is nowhere like a cruise to encourage them to try new foods.

Chef Chinthapatla noted that these days on ships it isn’t about the quantity of the food but rather the experience — for kids as well as adults. Everything is made from fresh ingredients. “Food is lighter and the portions are smaller,” he said. “There’s less butter, cream and cheeses; more simple sauces and emulsions … and the kids want to try everything.”