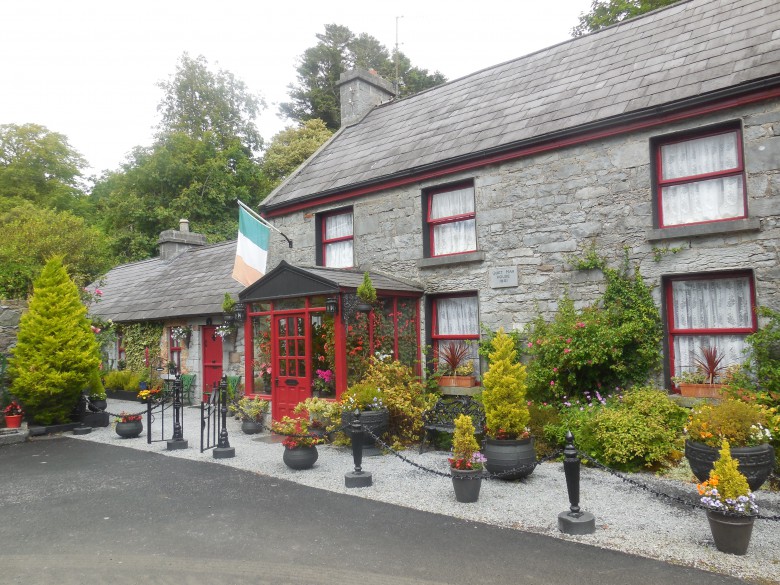 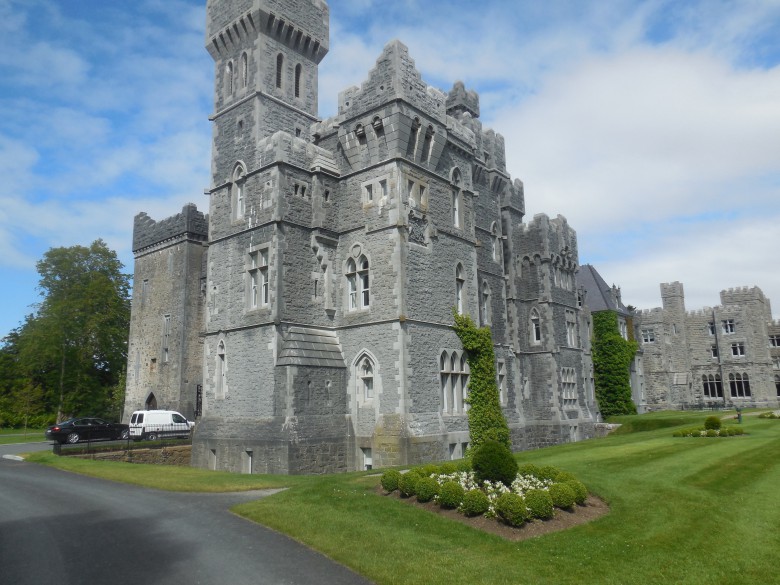 ASHFORD CASTLE, Ireland (Day One of Two) – It’s all in the sweep of your hand.

We  are at Ireland’s School of Falconry—the  oldest in the country—at Ashford Castle that dates back to 1228 on the shores of Lough Corrib, the largest lake in Ireland, and the River Cong, which is reputed to have the best salmon and trout fishing in Europe.

Erica Hunt brought her two young sons from Michigan because five year-old Reed didn’t believe there were “real castles.” Now his 11 year old brother Will wants to move here. He’s already been to the falconry school twice and is hoping for a third time. “Awesome,” he said. “The bird landed on my back and crawled up my arm!” 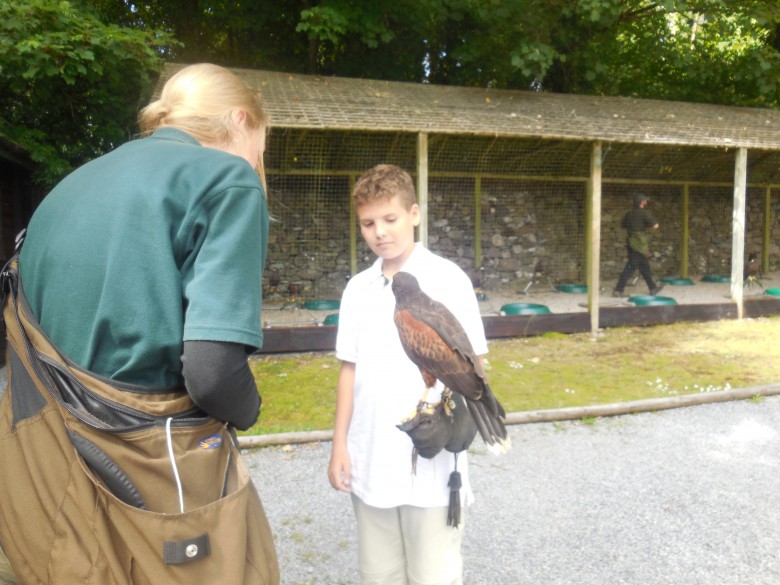 Will Reed with his Harris Hawk buddy

Cole Harmon, 10, was equally entranced: “You get to fly the birds,” he said.  I’d never held a hawk before!”

Like many American families that find their way here—and the guests are nearly all American—Cole is not only with his parents and younger sister but also two aunts and his grandmother. 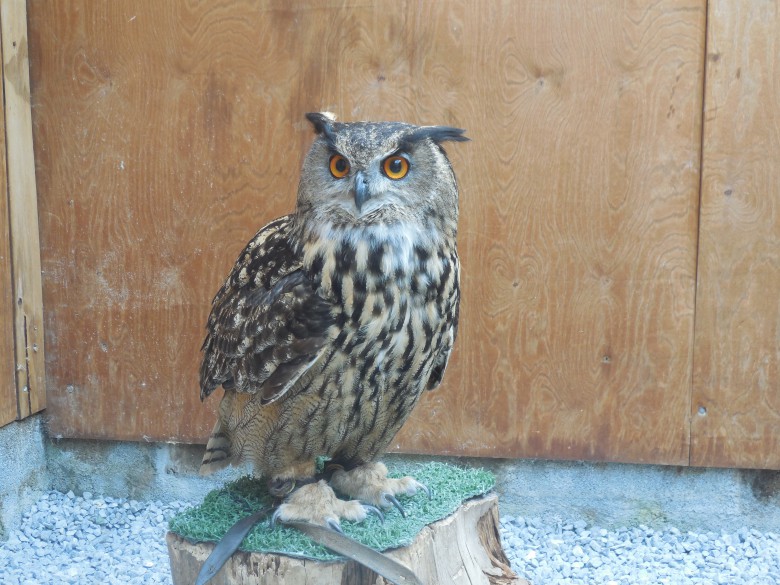 At the Falconry School, there are 33 birds including Dingle the owl, said  James Knight, who with his wife Debbie started the school some 16 years ago. Now there are at least a dozen in Ireland and many more in Great Britain.

“Think of it as the next step in bird watching,” he said.

Falconer Conal Dixon, a former grade school teacher, says even preschoolers can participate. “The kids are better than their parents,” he said. “They don’t think about being afraid…they just think awesome!”

And it is awesome as you learn to sweep your gloved hand upward to show the falcon you have food for him. Dixon explained the falcons are weighed daily to make sure they aren’t too heavy—if they eat too much, they won’t want to come back for your food. And when they fly off, they hunt, as ours named Fomhar (Gaelic for Autumn) did, swooping off in search of a mouse here, a bird there in the woods and the beautiful walled garden where we were taking our “Hawk Walk.” But he always came back because , as Dixon explained, “He knows he’s going to get fed and it’s a lot  easier than hunting.”

What do they eat? Tiny pieces of raw beef, chicken pieces, quail and mouse.  Females are heavier and fly longer but the  males, he said, are more agile and fly faster—all on 2.5 ounces of food a day.

What a unique experience. Kids are so excited they can barely speak… They’re thrilled that they can cast the bird off themselves.

Autumn whizzes by my ear; and lands right on my arm.  As soon as the food is gone, he is too–but he always comes back.  “We get a lot of kids who leave here wanting to become vets,” said Dixon.

Others plead with their parents to return—one little girl every day for a week.  Dingle the owl always attracts the kids too—he may not be snowy white, but Harry Potter fans especially love the falconry.

“Everyone is interested in wildlife and the natural world now,” said Knight, “This gives them a chance to see the birds in a different way.”

Ashford Castle gives families a chance for a lot of unique experiences—like horseback riding through a “magical enchanted” forest. “We were looking for leprechauns,” said  Erica Hunt. “We made wishes in a cave.”

There is archery and clay pigeon shooting—and soon, the chance to shoot the clay pigeons with a bow and arrow.  There are miles and miles of bike, hiking and jogging trails—the 350-acre estate has 26 miles itself but it connects with 5,000 acres. Just the chance to look around the historic Castle is an adventure in itself—the chance to take a selfie next to a Suite of Armour, a layered three-feet tall tiered tray as tall as a kid with dainty sandwiches (no crusts!), pastries and hot scones with lemon curd and clotted cream for Tea. You can have dinner in the Dungeon with its red flags flying . You can also watch a movie on a rainy day or play billiards in the new billiards room.  On their last night, each kid gets a personalized story about his or her stay at the castle.

“It is magical for a child here,” said Catherine Kenny, who organized these programs and makes sure each child gets a traditional Irish “Lucky Bag” with a treat and a toy.  Kids might also find fairy wings and wand or a sword in their room. 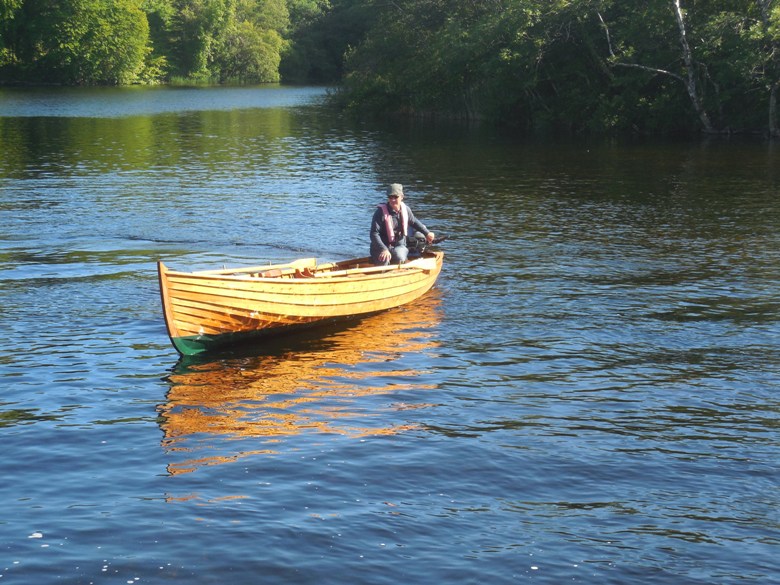 Frank Costlo in his hand-built boat

Check out the130 chandeliers that twinkle!  Go on  a picnic or learn to fish with Frank Costlo, who builds beautiful wooden boats in the winter.  There is a zipline in the woods and the chance to climb a 100-foot tree.  The resort’s new activity director of adventure spots, Thomas Breen, says more activities are in the offing

In October, there is a “Wizarding” package complete with capes, wand and glasses. The kids go on treasure hunts, to falconry school, are treated to a magician and make their own cupcakes.

Soon kids will be presented with a set of LEGOs to build their own castle. A new spa, fitness center and pool are about to open. Once home to the Guinness family for over 100 years, Ashford is the oldest castle hotel in Ireland.  A hotel since 1938, it has undergone a complete renovation since being acquired by Red Carnation Hotels.

The Lodge at Ashford Castle

In addition to the 82-room castle, there is a more casual (and less expensive) 50-room Lodge on the castle grounds that I think is ideal for families with its two-story units ($275 starting in high season, under $200 in low season  as compared to  from $595 high season in the castle).

A tip: Come for thanksgiving—rates are 35 per cent less October-April said Paula Carroll, the marketing director.  “Ireland doesn’t close the end of October.”  Another plus—you can clear U.S. customs when you leave Ireland.

Despite the hefty rates, she said, 20-30 per cent of guests are families, often traveling with grandparents. The new executive Chef Philippe Farineau has plans to recreate a multi-acre vegetable garden and to invite guests to go forage for wild herbs, mushrooms and more.  He welcomes young foodies ordering half portions.

“I really like all the old structures,” said 11 year old Tyler Burne, here with her parents, sister, brother and grandmother from Colorado Springs. CO. And they appreciate the staff—many of whom have been working here for more than 20 years, sometimes the second generation of  a family

“You can go for miles on a horse or on bikes in the countryside.” She and her dad, she said, like to come to the castle to run on the trails. “They are amazing!” she said. They were cut by the Guinness family for shooting and young trees were brought from all over the world.

In 1905, the future King George V came for a shooting party for two weeks and liked it so much that he stayed more than a month. What now is the Prince of Wales bar was built as a billiard room for his visit;  there is a lake-front log cabin built for his shooting party to have lunch

“Every kid should come here. It is really fun,” said 13 year old Seren O’Toole who lives here and was out on Patrick Luskin’s historic boat tour with her family.  “But you have to be ready for wind and rain!”