Looking For Those Unique Moments in Orlando (As Long as You Can Afford Them!) 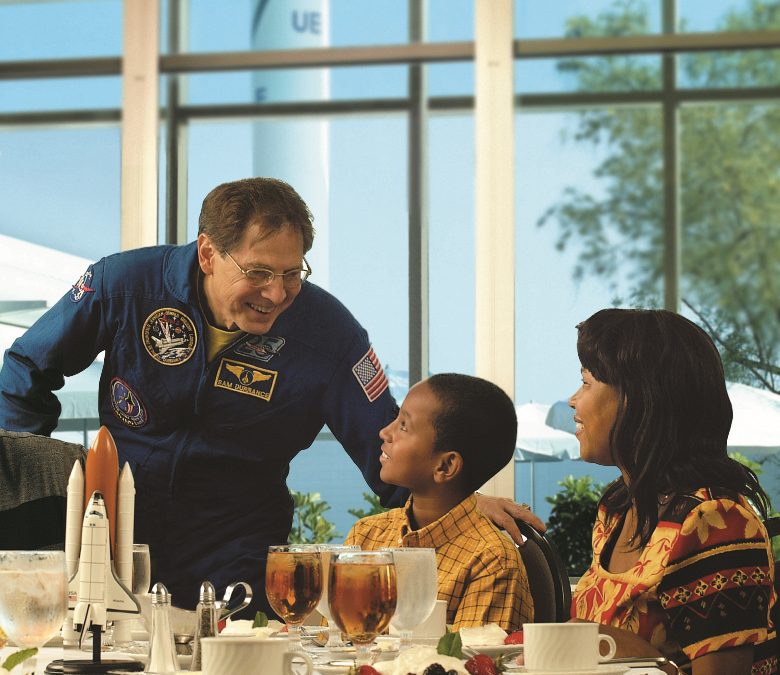 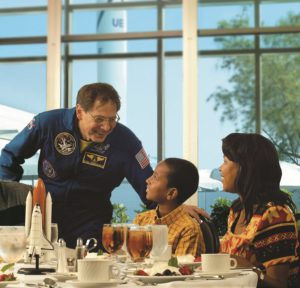 Lunch with an an astronaut at the Kennedy Space Center

I’m standing on a rickety bridge some 50 feet above a roaring river; the bridge spans more than 100 feet. Ferocious Nile alligators — more than a dozen of them — loll on the riverbank below.

Wild Animal Trek takes “adventurers,” just a dozen at a time, accompanied by two well-seasoned guides, on a bush walk and truck ride through the most remote areas of Disney’s Animal Kingdom. On our outing, a mama and baby rhino walked right in front of our truck and we saw a lion and lioness snoozing on a hilltop, not to mention the elephants, giraffes, antelopes, ostriches, gazelles, cheetahs, flamingos … the list could go on and on.

Having been on safari in Africa, I really do feel I’m back there — or at least somewhere other than an Orlando theme park. That’s the idea, of course, says Michael Colglazier, the vice president in charge of Disney’s Animal Kingdom.

For those heading to Orlando this spring break — and millions of parents and kids do (www.visitorlando.com) — there is an ever-growing array of unique VIP adventures to help you get away from the crowds and, hopefully, up the memory quotient. Some are inexpensive, requiring just a little advance planning, but others can cost big bucks, not including park admission, of course:

— Get up close and personal with the alligators at Gatorland (www.gatorland.com). Take a night walk or wrestle with one. (Prices start at $10.)

— Dive with 30 varieties of sharks at SeaWorld Orlando (www.seaworldorlando.com), or become a trainer for the day ($399 per person). If that’s not your speed, maybe your family would like the Elite Adventure Express Tour ($100 for adults, $75 for kids) which guarantees front-of-the-line access, front-row seating and the chance to meet a penguin, feed a dolphin and more. Look for even more unique adventures when SeaWorld’s Discovery Cove — the all-inclusive retreat where you swim with the dolphins — opens a new grand reef this summer.

— Take a VIP Tour at Universal Orlando Resort (www.universalorlando.com) and let your guide give you the 411 on all the attractions. Front-of-the-line access is also included. Did we mention the complimentary valet parking, the effortless character interaction (no waiting in long lines) and the discounts on souvenirs? (Prices start at $150 a person.)

— Have lunch with an astronaut ($43.86 for adults, $32.86 for kids) at the Kennedy Space Center Visitor Complex (www.kennedyspacecnter.com). You can also sign on for an Astronaut Training Experience (ready to take the helm at Mission Control?)

— Take your foodie to La Coquina Chef’s Table in the chef’s kitchen at the Hyatt Regency Grand Cypress (www.hyatt.com) and watch as they prepare your meal — all seven courses of it!

— Get your own private sliming at The Nickelodeon Suites Resort ($150), www.nickhotel.com.

— Take your junior fashionista for a Personal Fashion Stylist package complete with shopping tour at Orlando Premium Outlets (www.premiumoutlets.com/Orlando) or opt for the “Millenia Package” at the upscale Mall at Millenia, complete with image consultation, personal shopper, gift card and lunch (www.mallatmillenia.com).

At Walt Disney World, there are other VIP experiences to choose from, including a unique Richard Petty Speedway Challenge (www.drivepetty.com) exclusive to Walt Disney World Speedway. It’s a 50-lap program consisting of five 10-lap sessions, as well as a Ride-Along, shop tour with tech talk and lunch with the instructor and crew chief. (You’ve got to be 18 and have a driver’s license.) Take an take an all-day Backstage Magic tour that shows you exactly what it takes to make all that magic happen (www.disneyworld.com) or take your little princess to the Perfectly Princess Tea at the Grand Floridian Resort (http://disneyworld.disney.go.com/dining/garden-view-tea-room) where she’ll get princess lessons from resident Princess Aurora, a “My Disney Girl” princess doll with accessories, a princess tiara and bracelet, scrapbook and more. ($250 for one adult and one child.)

Of course, none of these opportunities comes cheap. The price for the Africa Trek is $189, but I like all the extras. Besides your trek, you receive a CD of photos, including plenty of the animals, your bush meal and a donation to support the threatened animal of your choice.

“A number of our guests were telling us they wanted to go deeper, get closer to the animals,” explained Colglazier, adding that this three-hour experience is designed to do just that, stopping at places no one else does, getting the CD of photographs (yes, that is you and your family in front of the giraffe! Crossing the net bridge! “This is a way to push the edges of what the park is supposed to be.”

I don’t think even the most jaded kid would get bored. When were you ever 20 feet from a grazing giraffe in his own territory, not in a zoo? Besides, we’re decked out in special vests (everything must be tethered or in pockets) and sport cables that hook us to a system of safety harnesses while going over those bridges or looking over the edge of the river, all to keep a misstep from turning into a tragedy. This is Disney, after all.

Wild Animal Trek may be the first place where families feel they can have a bonafide adventure with the security of knowing they are “safe at Disney World.” And this excursion can seem a bonafide bargain when you figure you didn’t fly thousands of miles and pay for a traditional safari.

Besides the antelope and gazelle, Watusi cattle and waterbuck live out on a Savannah, painstakingly recreated here, that stretches 800 square miles. (Considerable animal research goes on here as well.) We met one researcher who is studying why a group of male hippos is uncharacteristically living together in a small area. On our bush walk, we passed a real hippo skull and were calmly hurried along when one of our guides spotted an animal up in a tree. This is their home, after all.

When we finally sat down at what could only be described as a bush camp (it looked a lot like the ones I stayed in on safari in Tanzania), we were served an array of African inspired dishes — sun-dried tomato hummus and pita, curried chicken salad, fruit with mint, shrimp, dried beef and “Jungle Juice,” which we ate out of metal “camp” dishes with bamboo spoons. (Kids can opt for some substitutions — turkey rollups instead of dried beef, for example.)

This is definitely one for the memory books.