Mount Vernon is as close to royalty as America gets 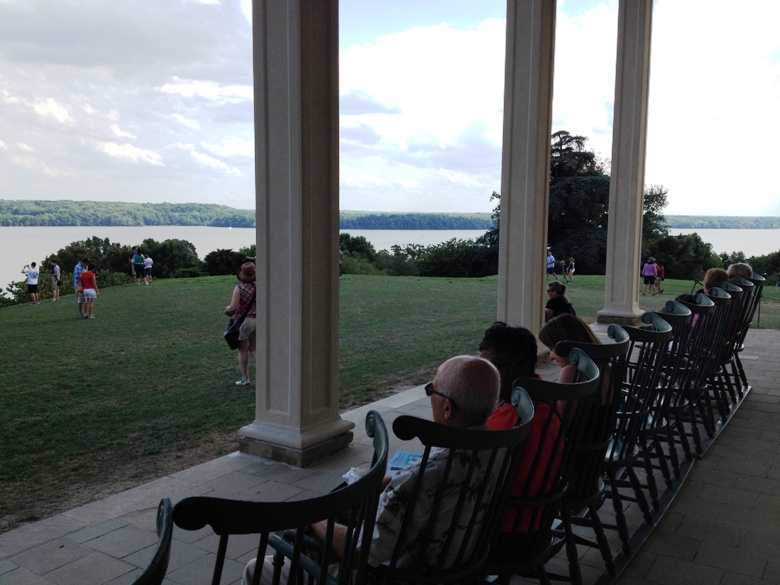 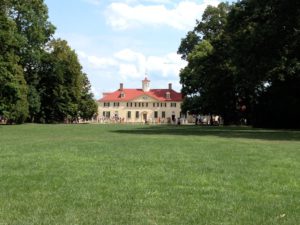 Every great capital city has a palace—a royal enclave fit for a king.  Paris has Versailles, London has Buckingham, and countless other seats of power across the old world feature the majestic halls of monarchs.

America may lack royalty, but Mount Vernon, the regal estate of our first president, is a must for families taking in the history of our nation’s capital.  It may not be quite as refined as the royal halls of Europe (kings and queens probably did not tend to their own livestock after all), but George Washington’s stately residence on the banks of the Potomac is an American symbol that commands reverence, while remaining as pleasant and charming as it did in the 18th century.

Lying just 16 miles south of Washington, Mount Vernon makes for an easy day trip from the capital.  Yet, the 8,000 acre estate, with the eloquent bowling green lawn leading up to the mansion itself provides a fitting alternative to the bustling city founded in Washington’s name.

When arriving at Mount Vernon, families should be sure to visit the museum and education center located just behind the main entrance for a proper introduction to the historic site.  While there you can explore the various galleries, watch short films produced by the History Channel, play with the interactive displays for kids and adults, and check out the Hands on History area where youngsters from three to eight can learn more about George and Martha Washington and their home.

On exiting the museum area, be sure to take some time to explore the grounds before rushing to the mansion for the official tour.  One of the highlights of Mount Vernon is the land itself, and special emphasis is placed on ensuring that the various gardens, orchards and pasture look as they did in the 18th century.  The plants and animals that George Washington kept and cultivated are on full display, including the same breeds of livestock, and visitors can begin to appreciate how central farming was to Washington and many other founding fathers.  Pay special attention to some of the older trees on the property: some like the enormous tulip poplars on the bowling green were planted by Washington himself. 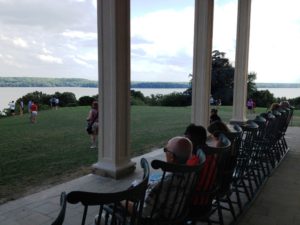 On the terrace at Mount Vernon

If you have time before touring the mansion, take a stroll down to the wharf, or simply hop on to the shuttle that runs regularly.  On the way down, visitors pass Washington’s peaceful tomb, where wreath laying ceremonies can be attended at 10:00am and 2:00pm every day from April to October.  Both the wharf and the lawns behind the mansion provide wonderful views of the Potomac and the forested shoreline across the river.  Thanks to efforts from citizens, the entire stretch of shoreline across the river from the estate is preserved for the benefit of visitors; autumn is an especially appropriate time to gaze across the water to the sea of orange, red and yellow leaves that accent the countryside.

The mansion tour, which begins in front of the grand house, offers possibly the best view into the day-to-day life of George Washington and his family.  Meant to look as it did in 1799, the year that Washington died, the mansion features a wide range of artifacts that are original to the estate.  Even the color of the walls—from sky blue to lime green—are recreated to mimic the days of Washington.  The tour itself is narrated by multiple tour guides located in the different rooms of the house, all of whom passionately explain the details of the chambers and the artifacts that are scattered about.

While George and Martha Washington may not have been able to imagine their timeless home being visited by over a million people each year, they certainly were not shy about receiving visitors.  The year after Washington’s presidency, the family received 677 overnight guests, many just simple travelers passing through.  So the next time your family is in Washington, DC, be sure to stop by Mount Vernon; after all, George and Martha never turned a guest away.