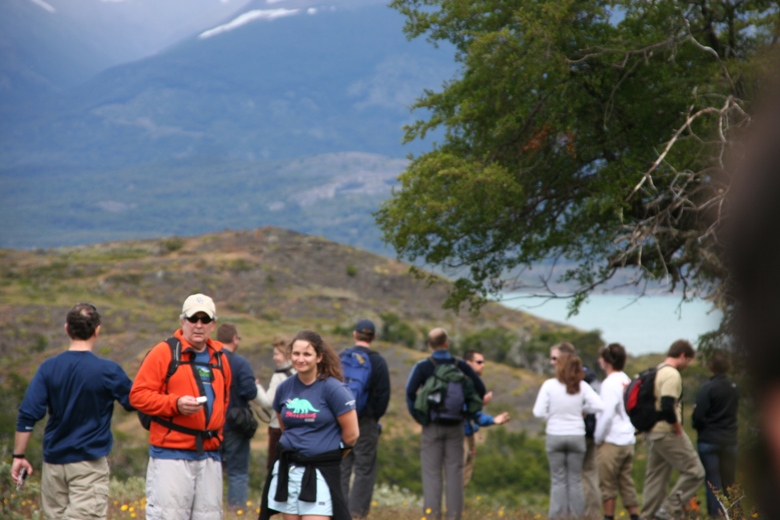 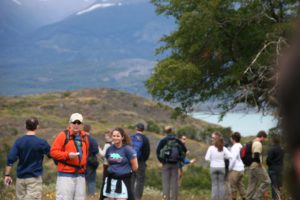 DAY FOUR:  The whole lamb is roasting on a spit over blistering hot coals in the middle of nowhere–literally. It smells delicious and has been soaked in beer and seasoned only with salt. Potatoes are roasting in the coals and an array of salads is spread out on the tables. We’re offered red Chilean wines, local beers or Pisco Sour, the drink Chileans favor that’s made with Pisco grapes, lemon sugar—kind of a cross between a Whiskey Sour and a Margarita.

Welcome to a traditional Patagonia Barbeque. Traditionally, we’re told, those in Patagonia head out to the countryside for such barbeques on New Year’s Day, which is today.

Back home, we might be cooking a leg of lamb for New Years in an Oklahoma Joe Smoker. I’m betting most of us don’t hike four miles through an old forest, fields of daisies along Everhard Fjord, majestic mountain vistas  in the distance and bird watching to get there (a woodpecker, an eagle, ducks, flickers and finches), to be greeted by the Fjord’s namesake Herman Everhard.  It turns out his grandfather, also named Herman Everhard, was the first to settle here back in 1893, amassing a large (25,000 acre) cattle ranch. But when Chile’s government undertook agrarian reform in the 1960s, they seized land from many large ranchers and rather than let them have his large hacienda, the Everhards took it down, our guide Matias del Sol explains.

Today Everhard, who speaks no English, is supervising the cooking of the lamb, which takes hours. This is a special excursion from the Hotel Remota (www.remota.cl) where we’re staying in the small town of Puerto Natales. The architecture is striking—the rough hewn beams in our trees are local.

And the place is drawing more Americans as well as others from around the world.  We meet the Miseles who are from Marin County, SF and are traveling with their three kids aged 16-24—their first trip to South America. “We wanted to go to Patagonia for the vastness,” said Joy MIstale.  “And we like more physical vacations.” The family has hiked, horse backed and explored caves all with Remota guides the last few days. “It’s been excellent,” she said. “I like the organic feel and it is wonderful not to have TVS in the rooms. Definitely worth the long trip.”

“Anywhere you want to go in the world that is interesting is a schlep,” agrees Cynthia Krus, an attorney from Washington DC traveling with her husband.  “This gives you a real context for the region and the hotel fits the landscape.”

Just as important, she says, after nearly a week here, the guides will do everything they can to make your experience what you want. “They built special excursions just for us,” she said, adding that since she and her husband have arrived they’ve met locals, Italians, French—people from around the world.

“They never say no to you,” her husband George Corey adds. “Whatever you want to do, they find a way to make it happen.”

And because the excursions—whether the hike to the BBQ next to the fjordor a hike in famous Torre del Paine National Park which many consider the most beautiful in South America or horseback riding with gauchos—is all included so you don’t have to worry about paying extra, except perhaps for tipping the guides at the end of the stay.

We eat our lunch at long tables covered with checkered cloths in a large multi-sided room that has been built just for this purpose. A family from Santiago is digging in down the table. The cook slices big hunks of lamb off the spit and tosses them in a big stainless steel pan. It is up to us to serve ourselves. Everyone eats with their hands (as well as forks).  I don’t think lamb has ever tasted so good.

When we’re sated, we wander outside to the fields of daises alongside the fjord where everyone collapses in the grass for a post-lunch siesta—especially welcome after the four-mile hike. Then it’s decision time—another hike up to a lookout, a bike ride back or a quick boat ride to where the vans are parked ready to whisk us back to our home away from home.

The kids are up for more adventure. They opt to bike. My husband and I are all too ready for the quickest way back to the hotel and a nap. Did I mention the hot tub?