On the old-fashioned train to the Grand Canyon 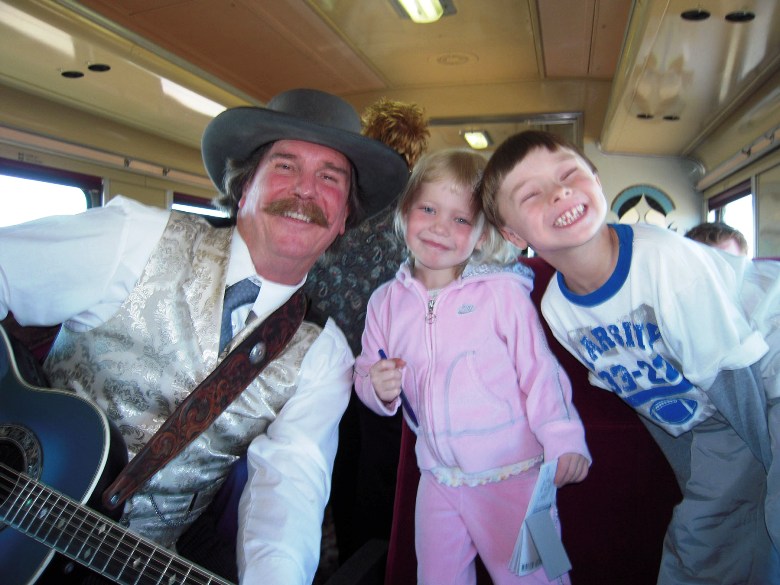 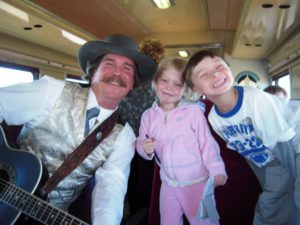 It’s that rare vacation moment when everyone is happy at the same time. And all it took was an old-fashioned train in a remote Arizona town and a singing cowboy leading the kids in a spirited rendition of “Old MacDonald Had a Farm.”

“Our kids have never been on a train before,” said Mary Macho, visiting from Eden Prairie, Minn., with her husband, 10-year-old twins and 8-year-old. “This is a new adventure for all of us.”

“And this is a lot better than me having to drive!” adds her husband Dennis.
We’re on our way to the Grand Canyon the way tourists came more than a century ago, before the Grand Canyon was designated a national park in 1919, via the Grand Canyon Railway (www.thetrain.com). The Railway, in fact, is credited with revolutionizing this spectacular place, opening the region to widespread tourism. Before then, the remoteness of the area — and the arduous trip by horseback or stagecoach to get here — kept most people away. (That was difficult for the kids in our train car — iPods and video games in hand — to even imagine.) Today, the Grand Canyon is one of the most visited national parks in the world, drawing nearly 5 million people a year, most coming by car.

My young cousins from Denver, 6-year-old Ethan Sitzman and his 4-year-old sister Hannah, who have joined me, along with their parents, couldn’t be happier that they’re on the train and not buckled in their safety and booster seats as we make our way the 65 oh-so-scenic miles to Grand Canyon National Park (www.nps.gov).

As parents compare vacation travel notes, Cowboy singer Craig Summers perches on the side of their chair to strum his guitar, while the older kids make a big fuss over them. “I didn’t even know this guy this morning and now he’s my best friend,” says Ethan. (That doesn’t happen in the back of the minivan!)

“The best part of the trip is the other kids you meet,” says 9-year-old Joshua Jeffries, Ethan’s new best buddy. Jeffries, like Ethan, is from suburban Denver.

Little Rock, Ark., dad Joe Whisenhunt was more interested in sharing the history of train travel with his four kids, watching the scenery with them instead of driving unfamiliar roads with squabbling kids in the back seat.

Onboard the Grand Canyon train, the journey is actually as much fun as the destination. Parents play cards with the kids, trade quips with the cowboy entertainers, help themselves to snacks and drinks and keep their eyes peeled for wildlife. (We’re supposed to sing, “Home on the Range” when we spy an antelope.) Our friendly steward, Lorraine Oresko, a five-year veteran, offers tips on what to see when we arrive.

Whisenhunt didn’t mind a bit that the family could have driven for far less money — round-trip tickets start at $40 for kids and $70 for adults. Ask about AAA discounts. And in honor of the 50th birthday of the diesel locomotive, if you are turning 50 or celebrating your 50th anniversary, you can ride the train for free. (Check www.thetrain.com)

The train, besides being a good history lessons, is also good for the environment. It carries more than 225,000 passengers a year, reducing auto traffic to the South Rim by 10 percent. Instead of steam locomotives, cleaner and more efficient diesel locomotives are used.

“This is money well spent,” said Whisenhunt. No matter how bad the economic news, he added, “You have to keep going and make memories!”

And this train ride — not to mention a visit to the Grand Canyon — certainly is one for the memory books. (Come at Christmas when the train becomes the Polar Express, complete with Santa!)

“Our kids are getting older and won’t want to travel with us too much longer,” says Alice Schmookler, mother of three, ages 14, 12 and 9. She and her husband, Sandy, are also happy to have the opportunity to show their Florida-bred kids such a different landscape.

Some of our fellow passengers chose to return on the train that afternoon, but we spent the night at a Grand Canyon lodge so that we could have more time to “explore,” as Ethan says. (More about that in an upcoming column.) The train makes it so easy — they transferred all of our bags so we could head right out. The bags were waiting in our rooms later — and would be delivered back to the train the following day.

Thanks, Max and Thelma Biegert, for making this possible. By the ’50s, more and more tourists were driving to the Grand Canyon instead of taking the train and the train eventually shut down in 1968. Only after spirited (and expensive) efforts by the Biegerts did train service resume in 1999.

Nine years later, the Grand Canyon Railway was placed on the National Register of Historic Places and the quaint Williams Depot — where we were treated to a Wild West show before the train left– was renovated. A hotel soon opened and two years ago, Xanterra (www.xanterra.com), which oversees the hotels and lodges in the Grand Canyon and other national parks, took over the train and depot hotel.

For us, the train fun started before we even got on board — with a Wild West show. “Those aren’t real guns are they?” asked a worried Hannah. As if on cue, the cowboys got up, dusted themselves off and told more jokes.

On the way back, the kids are too smart for the “train robbers.” They recognize them from the Wild West show and just giggle as they make their way through the car, followed by the “sheriff.”

Sure it’s hokey. But it’s fun — for the grown-ups as well as the kids. And these days, that counts for a lot.