ON THE TRAIN TO THE GRAND CANYON 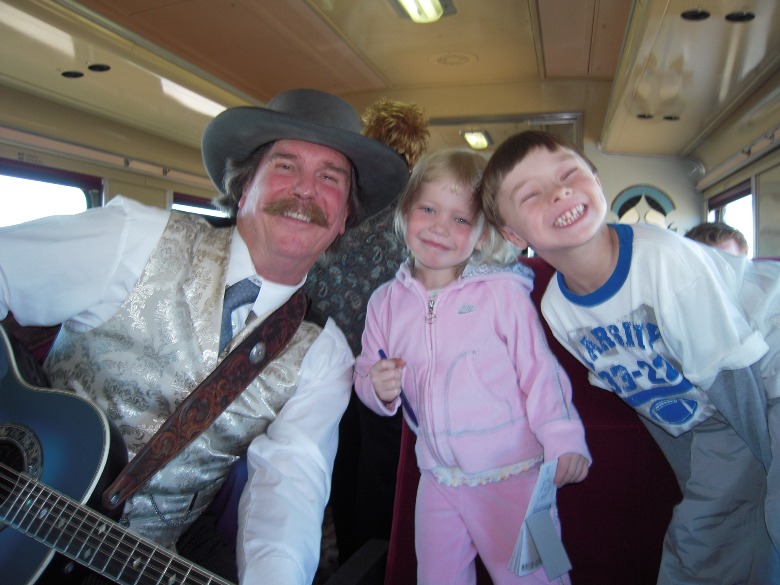 DAY 2 (ON THE TRAIN TO THE GRAND CANYON) — Cows, Chickens, Goats, Dogs… The “cowboy” whose name is Craig Summers is perched on one of the chairs on the Grand Canyon Railway (www.thetrain.com) leading all of the kids in the car in a spirited rendition of Old McDonald Had a Farm.

They range from 4 year old Hannah Sitzman, from Colorado, to Ashleigh Jeffries, who is also from Colorado and traveling with her mom, younger brother and grandparents. We meet families with teens in other cars, everyone having a good time. The train was the way early tourists got to the Grand Canyon until American families forsook the rails for cars.

Today, the train once again carries more than 200,000 passengers to the Canyon 60 miles and 2.5 hours from Williams. Some will return the same afternoon. My cousins — -Jayme and Mike Sitzman and Ethan, 6, and Hannah,4, and I have decided to overnight at the canyon so we have more time to “explore,” as Ethan says.

The train makes it so easy — they transfer all of our bags so we can head right out. They are waiting in our rooms later — and will be delivered back to the train tomorrow.

Why the train? “The kids have never been on a train,” says Mary Macho, who is from Eden Prairie, MN, and is traveling with her 10 year old twins and an 8 year old. “This is a new adventure.”

Besides, adds her husband Dennis, “I don’t have to drive!”

Instead parents can play Yahtzee or cards with the kids, enjoy the cowboy entertainers and the snacks and keep their eyes peeled for antelope (we’re supposed to start singing Home on the Range when we spy one).

It’s a little hokey and a lot of fun. We started the day first with a terrific breakfast at the Pine Country Restaurant I’m sorry we didn’t know about the place last night because apparently they’re famous for their homemade pies. The place is full not only of train passengers but those driving along the original Route 66.

The train fun started before we even got on board — with a Wild West show. “Those aren’t real guns are they?” asked a worried four year old (Hannah). As if on cue, the cowboys got up. Did I mention the birthday present to all celebrating? The kids thought it was hysterical when “Wolf” offered them a piece of horse poop…

Old fashioned, silly, and fun for the grownups as well as the kids.

And a lot more relaxing than driving, all the adults agree. “We can watch the whole thing instead of me driving and watching the road,” says Dennis Macho, adding that the train travels a route cars don’t go. Let’s not forget it’s greener to keep cars out of the Canyon too. And the trains, we’re told, have been modernized to be as green as possible.

They are very comfortable with big windows, plush seats and a wonderful steward, Lorraine Oresko, who serves us drinks — there’s fruit, muffins and pastries too. “I really love seeing the families having fun together,” she says.

“There’s a lot of history on the train,” adds Joe Whisenhunt, traveling with his wife and four kids from Little Rock. And the trip — which isn’t cheap — is money well spent because it is such a unique experience, he adds. No matter how dire the economy, he says, “You have to keep going and keep living.”

“Our kids are getting older and won’t want to travel with us too much longer,” adds Alice Schmookler, who has a 14 year old 12 year old and nine year old.

“You’ve got to take advantage of the time before the kids get too big,” adds her husband Sandy. The Tallahassee family is thrilled just to experience such different landscape from home.

That’s all part of it, of course, to show kids that everything doesn’t look the way it does at home, that everyone doesn’t dress the same. It really is a big country out there.

For the kids’ part, they just think the train is cool. “I like the motion,” says 12 year old Ashleigh.

Eleven year old Chris, who is from California, likes being able to move around — and the snacks at the ready.

By the time we’re pulling into the Grand Canyon, the kids are all fast friends.

“They pose for pictures together outside the train. “I just met him today and he’s my best friend,” says six year old Ethan, gesturing to nine year old Joshua Jeffries.

“The best part,” says Josh,” was meeting all the kids!

We head off our separate ways to explore the canyon, all smiling. Money well spent, we agree.