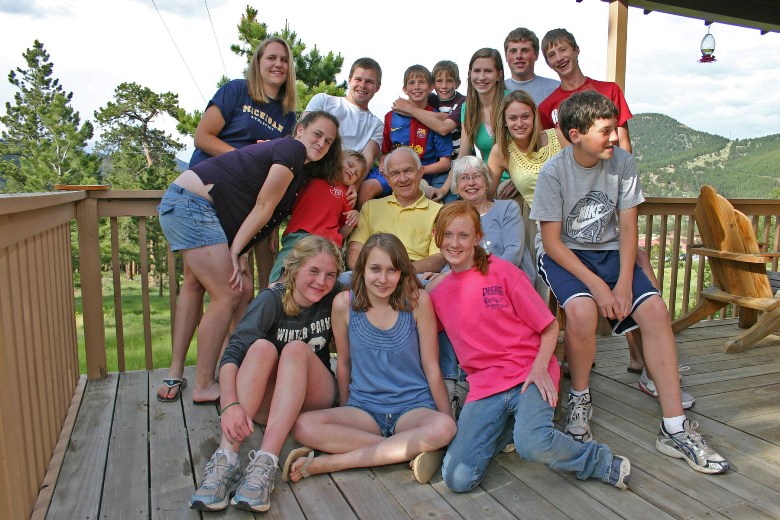 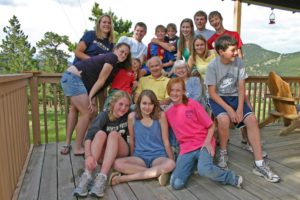 The Drews family, kids and grandparents.

I’m done with cooking and cleaning for family guests, with giving presents I’m not even sure anyone wants.

But I’m not done with getting together with the family — not by a long shot. That’s why I’m such a fan of reunions — held anywhere but my house. Next up: Beaver Creek, Colo., in February, for the skiers in the family. They’ll come from California, Colorado and Connecticut for the chance to have some fun in the snow together. I’ve met families who have gathered in Orlando and in the Galapagos Islands, at Colorado Ski Resorts and Cape Cod cottages, on cruise ships everywhere from Alaska to the Caribbean, even the Mediterranean, celebrating 75th birthdays and 50th anniversaries, graduations, survival from serious illness and simple family togetherness. According to TripAdvisor, an online travel resource, more than 80 percent of those surveyed expected to travel over the holidays to see their friends and family — more than in the previous year; this despite the depressing economic news.

The thing to remember is that these gatherings — one family told me they’re calling it a “rendezvous” rather than a reunion — won’t be perfect. We’re talking about family, after all. Everyone brings along the same emotional baggage whenever they get together.

These gatherings don’t need to be exotic or expensive either. For example, next Mother’s Day weekend, we’re planning to gather at a Homewood Suites in Champaign, Ill., near where my mother-in-law lives to celebrate her 90th birthday. What matters most to her is having her six children together. What matters to us is making her happy. And I think it’s especially important in these times to grab those happy moments whenever and wherever we can.

“Our goal is to keep the family reunions going every three years so that our children and grandchildren will continue them,” said Nancy Bauer, who is from Fullerton, Calif. Bauer says that 60 of her family members will gather at the YMCA of the Rockies (www.YMCArockies.org) in Colorado over the Fourth of July weekend.

Jennifer Slayer from Galveston, Texas is in the midst of planning one reunion for her husband’s family in Texas and another in 2010 for her own family at the YMCA of the Rockies. In fact, she joined her parents and her sister, who lives in Pittsburgh, at a special weekend camp at the YMCA of the Rockies in Estes Park at the edge of Rocky Mountain National Park. The camp was held recently for those planning reunions at the Estes Park Center and at Snow Mountain Ranch near Winter Park, Colo.

The YMCA of the Rockies may well be reunion central — hosting more than 1,000 family reunions a year. There is even a “reunion” cabin that sleeps 70 and a new 100-room Longs Peak Lodge, opening this summer, designed with plenty of indoor and outdoor gathering space.

About 120 people attended the Family Reunion University weekend, determined to “plan smart” for their upcoming reunions. The mantra for reunion planners, I told the group: “You are not responsible for everyone’s happiness!”

“There are some people who will complain no matter what you do,” agreed Clara Krieger, from suburban Denver. “I tell them to go someplace else until they find their happy space.”

RULE 2: Make sure everyone has plenty of space. There’s nothing worse than too many relatives sharing bathrooms.

RULE 3: Give everyone permission to get away from the crowd.

Everyone at this reunion planners’ meeting discussed ways to make the reunion affordable for everyone in the family. Ruth Harvey, whose family — 67 strong — will gather for the first time in five years — says this year some of the grandparents are paying for their children and grandchildren. “I’m not sure it is because of the economy,” she says. “It’s primarily because they want their children to attend.” And we all know that parents paying the tab can be a powerful motivator.

“We are going to give your children checks at Christmas instead of gifts, which can then be applied to reunion expenses, said Nancy Bauer, adding that the grandkids will get envelopes with pre-paid certificates for activities.

Tina Powell noted that her family was thinking of establishing a scholarship fund for those who might need financial help making the trip. Another family said that they hold a silent auction to raise money, selling everything from a $300 quilt to a six-pack of beer.

The YMCA of the Rockies, though, is pretty affordable — less than $200 a night for a family of four, including three meals a day and activities that range from mini golf, basketball, softball, hiking, swimming and a well-equipped craft center. My husband’s family has held several reunions here, in fact, for exactly that reason.

Rather than the motel-like lodges and the cafeteria, we opted for a picturesque cabin in which we had even more fun cooking together. (Spending less in the process.)

That affordability is probably why the YMCA of the Rockies may be one of the few resorts in the country that isn’t seeing business disappear. Reunions are right on track, says Sara Kleiber, group sales manager. “People still want to get together!” (Wherever the family gathers this year, don’t be shy about asking for freebies and extras. The resorts/cruise ships/hotels will be glad for your group’s business.)

“There are people for whom money is an issue but they always manage to come,” offered Pam Clark who lives in Morrison, Colo., and was planning a reunion for more than 50 people in her family.

In fact, almost three-fourths of those polled for a nationwide survey by Ypartnership (www.ypartnership.com), leaders in travel research, said they have taken a trip to celebrate a special occasion. Their motivation: To reconnect with family and create special memories.

No matter how bad the economy, it’s important for families to come together at reunions, says Ruth Harvey. “It’s important to bring us closer.”

And in the end, that’s what really counts.