Remembering a great adventure in the high Chilean desert 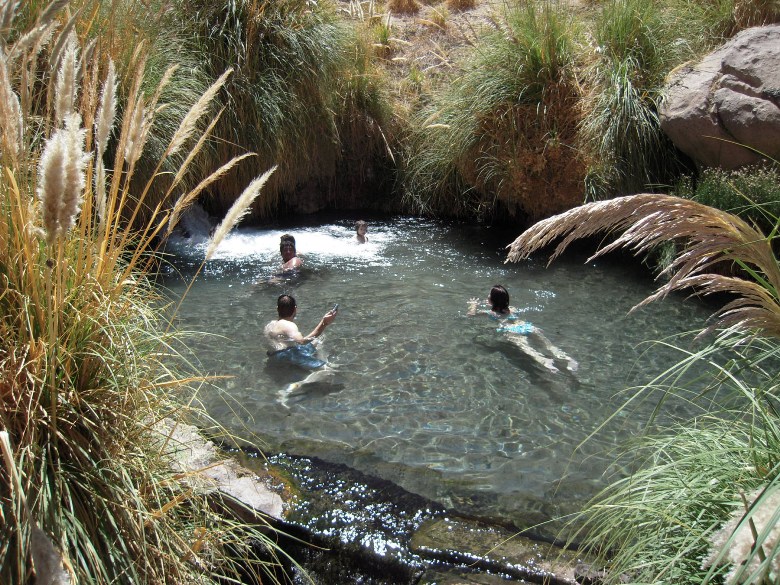 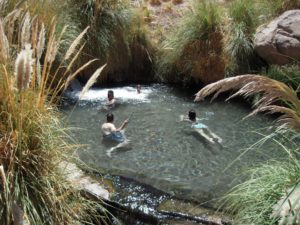 We’ve stopped in a native village called Machucha Town –at over 12,000 feet where local Atacamas stay while herding their llama. Today we don’t see llamas—just tourists—and a local man dishing up llama shish kebab while a woman fries llama empanadas inside. In case you are wondering, llama tastes like lamb

It’s only 10 a.m. but I feel like we’ve been going all day. That’s because we left our hotel Tierra Atacama before dawn—I’d never seen such bright stars across the desert sky—on our way to the highest geyser field in the world—El Tatio Geisers at 14,190 feet!  The field is only a little more than 60 miles from the town of San Pedro where we are staying but it takes us two hours on bumpy, sand roads to get there, even crossing a river (a shallow one) in one spot.

It’s worth it! This is a huge geyser field—close to four square miles with geysers hot springs where people are swimming, boiling mud pots and fumaroles. We see red, yellow and green in the water from iron, sulfur and copper. And unlike visiting Yellowstone, there are no barricades to keep you back. That can be a bad thing—people have died from falling in to the boiling water. But we get close enough to hear the water gurgle before it erupts in a high stream and to feel the steam on our faces.

What a fantastic sight! Dozens of fumaroles erupting steam with the Andes in the background.  We are close to the border of Bolivia and there are 60-65 geysers here. “New ones are appearing all the time,” says our guide Matilde Villardel.  She says locals dub them “baby geysers.”  (For more on our other adventures here hiking, soaking in hot springs, getting up close and personal with flamingos,   read my travel diaries.)

Pressure is built up underground and released through cracks in the earth’s crust.  And we walk around the area peering at the steaming vents, the bubbling water, waiting for one geyser to erupt which it does on schedule, every eight minutes, though not nearly so high as Old Faithful.

Sunrise here is spectacular–the mountains peachy, the steam slowly drifting upward.  No wonder tourists are eager to make the early morning trek here over some of the worst roads I’ve ever traveled. We come so early, our guide explains, because the geothermal activity slows down later in the day. In fact, by the time we leave—after a picnic breakfast overlooking the geysers—the activity seems to slow.

We pass wild vicunas on our way back but no llamas. I was hoping to see a herd!

This afternoon, we hope to spend some time in San Pedro, a sleepy town of just 4,000 that’s getting new life as a tourist destination but so far, retaining its charm in its sand streets, pedestrian walkways and open-air restaurants and bars fashioned from old store fronts. We ate a great meal at one favorite here last night called Café Adobe where an open round fire place in the idle of the room wards off the night desert chill. A local specialty, Lomo a lo Pobre, which is a hunk of meat served with two fried eggs on top and a huge portion of fries underneath.  The vegetarians in our crew opted for a Risotto that was equally good.

For such a small town, there was a lot of action on the pedestrian main street Caracoles Street that runs for about five blocks, lines with tiny shops, and these old houses that have just in the past decade or so been turned into bars and restaurants,  busy with locals and tourists alike.

That’s it for our Chile adventure – from the warm summer desert tomorrow we head back to the Northeast (me), California (Reggie and Dan) and Colorado (Mel).

It’s freezing in most of the US we’ve heard.