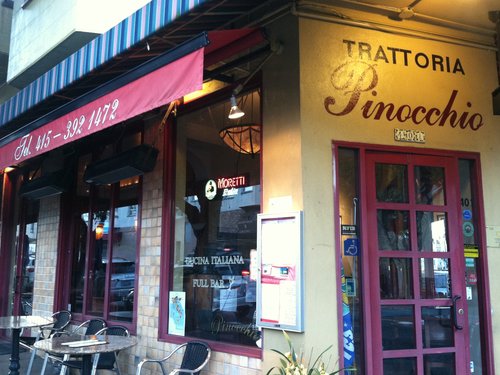 Many boast that there are more restaurants per capita in San Francisco than in most cities.  “Chefs are our celebrities,” says Laurie Armstrong, a spokesman for the San Francisco Convention and Visitors Bureau.

For kids, of course, restaurants aren’t just about the food; they’re about the experience.

That’s why we sought out The Singing Chef Giovanni Zocca at the family-owned and award-winning Trattoria Pinocchio right off Broadway in North Beach. Kids will like the open kitchen where they can watch their food being prepared; everyone will like Chef Giovanni’s singing. (For kids who are picky eaters, there’s penne pasta or spaghetti with tomato sauce for $6.95.)

North Beach, of course, is not a beach but a famous San Francisco neighborhood first settled by Italian fisherman and laborers in the early years of the 20th century. Later it became home for writers and artists.  (You can still visit City Lights, the famous independent book store and publisher that was founded in 1953 by poet Lawrence Ferlinghetti and his partner Peter Martin and was known for publishing Beat Generation authors, including Allen Ginsberg’s Howl and Other Poems that was declared “obscene” and was  at the heart of a precedent-setting verdict that provided books with “the slightest redeeming social importance” are guaranteed First Amendment protections and couldn’t be banned.   It’s an official city historic landmark.)

While you are in the neighborhood,  take a walk down Kerouac Ally (next to City Lights at 261 Columbus Ave. ) to read quotes from famous writers like Lawrence Ferlinghetti, Jack Kerouc and Maya Angelou.

San Francisco is a great foodie city, even for the youngest foodies in the family.  We saw several families at NOPA, the very trendy and popular restaurant specializing in organic wood-fired cuisine with locally sourced ingredients.

You also won’t want to miss the Ferry  Plaza on the Embarcadero and the Farmer’s Market there Tuesdays, Thursdays and Saturdays where the kids can talk to local farmers and try things they’ve never eaten. Have your kids ever seen a cranberry bean or a white peach?  Here’s what I wrote about my visit there.

We loved that at Trattoria Pinocchio all ages are guaranteed to find something they’ll like to eat and that you are welcomed as if you are old friends of the family.  Chef Zocca told us he first came from Sicily as a teenager to join relatives fishing but discovered he preferred cooking the fish (lemon garlic crab is a specialty as is his house-made ravioli and gnocchi. “He’s worked in the fishing and restaurant industry all his life in Sicily, Monterey and San Francisco,” said his wife Maria.

“He is the singing Sicilian Chef in the kitchen and out.”  That means he will happily serenade guests as they chow down on what is consistently voted a top pasta restaurant in North Beach. Chef Zocca even offered travel tips for an upcoming trip to Milan.

Kids who are adventurous eaters can try grilled Portobello mushrooms with sautéed sundried tomatoes, baby octopus in garlic tomato sauce, fettuccine, pappardelle, Gnocchi, ravioli and lasagna made fresh daily and served in a variety of ways a( gnocchi with gorgonzola cream sauce, spinach ravioli with tomato sauce ravioli filled with veal, sausage or lobster and crab , veal or veggie lasagna fettuccine with salmon .

There’s also chicken parmesan and every variety of pizza.

Did I mention this place is very reasonably priced in a city of pricey restaurants?