Searching for polar bears in the water and ice 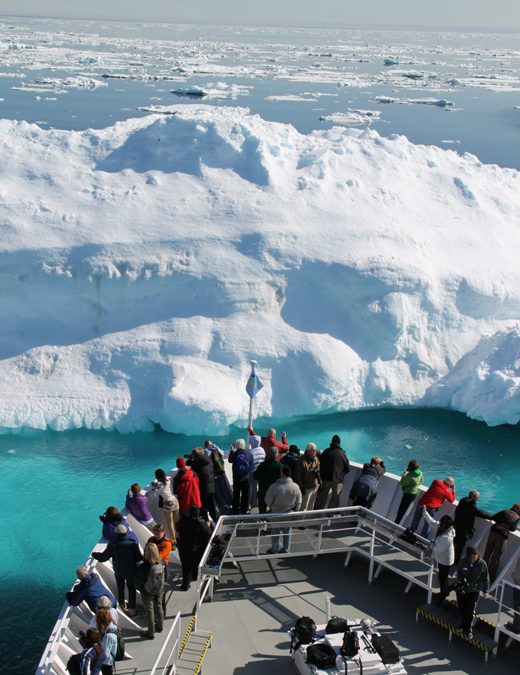 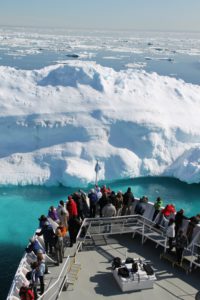 It is 5:30 a.m. and like many of the passengers aboard the Lindblad Expeditions National Geographic Explorer, 9-year-old Evie Plunkett jumps out of bed and into more layers of clothes than she’s ever worn.

This was no onboard emergency, but something just as significant to the Lindblad Expeditions guests exploring these Arctic waters… a polar bear just 90 feet from the ship.  On board this ship in the Arctic—we’re less than 1,000 miles from the North Pole—a  polar bear sighting is reason to jump out of bed, bolt from lunch or get off the treadmill.

“I got a picture of him with his tongue out,” said Evie proudly. She’s here with her grandparents, and was using a camera loaned by her grandfather, William, an accomplished photographer.

What a Fourth of July celebration! We had burgers, fries and potato salad for lunch, and sausages and beer served on the ship’s back sundeck later in the afternoon. We learned about Svalbard geology and ice forms from onboard geologist Jason Kelly. We listened to National Geographic Photographer Chris Rainier describe his work for the Society.

But what we really “feasted” on during this day devoted to exploring in the pack ice were the five polar bears we saw – swimming, eating a seal, and lolling on an ice floe on a spectacularly beautiful sunny day in the Storfjorden Region, the body of water separating Spitsbergen in the west from Barentsoya and Edjoya to the east.

“Very cool,” said Evie, the youngest on board.  Our last polar bear of the day enjoyed dinner his seal dinner as we watched, oblivious to the audience. Birds swooped in for the leftovers.

No one minded getting up so early to shiver in the cold. In fact, getting this close to a Polar Bear was exactly why many of the passengers had spent so many thousands of dollars and traveled so any thousands of miles—and they wanted to go home with the photos to prove it.

Some of Evie’s terrific photos accompanied the daily Lindblad Expedition report which I was invited to write.  She was helped by onboard Photo Instructor CT Ticknor. “Everyone sees something different,” Ticknor told Evie.  “That is the magic.”

And that is the magic of this weeklong Expedition to the Land of the Ice Bears  because each of us—and we range from age nine to 86— is experiencing this pristine wilderness in his or her own way, whether on deck with a long camera lens, in the open bridge with binoculars, sitting in the sunshine on the deck, or chatting with the staff and crew.

“It takes a lot of waiting and a lot of patience,” Evie acknowledged. The bears don’t pop out on cue. They may dive into the water behind an iceberg just when we’ve got our cameras ready. They may appear when we’re in the shower.

But that unpredictability adds to the adventure.  On this morning, we are roughly 925 miles from the North Pole, our affable captain Oliver Kruess tells me on the Bridge. The ship has an open bridge policy so on this morning, as we are heading through the ice looking for polar bears, many guests are scanning the horizon right from the bridge.

He jokes that when the ship collides with a hard iceberg (we learn the bluer it is and the higher, the harder the ice) it is like two masses, thus the shudder. “Like a husband and wife,” jokes Iro Sotiriadou, traveling with her 22 year old granddaughter Melissa Hadjikyriakou from Cyprus. The trip is her college graduation present. “This is lovely to share it with her while I can,” the proud grandma says.

While some of the crew and naturalists scan the horizon—all we see is blue sky and floating ice of all different sizes and shapes—the captain explains that as much as 30 feet of the ice bergs are below water…  This ship, of course, is built especially to handle ice.  “Potentially any floe can have bears,” he says.

We look down and see giant footprints on one ice floe.  A polar bear, of course, is huge. Males can weigh 1,100 pounds, females 500. We are looking for seals too because seals are the bears’ main source of food—Ringed Seals, their most favorite (they might eat 45 a year of the five foot seals that can weigh upwards of 220 pounds). They are the most numerous the arctic animals—some 6 million exist.

But they also will eat Harp Seal and Bearded Seals which can weigh more than 600 pounds.

Wow! There is nothing out here—not another ship, just ice, bears seals and other arctic wildlife.

I meet people here who are on their first such expedition; others have been on many. Some give up a lot to be here, says Lisa Villar, a physical therapist from Chicago standing next to me on the bridge. Others seem to have unlimited resources and travel to far flung destinations several times a year. “This kind of trip makes it easy to go as a single person. There are always interesting people from different cultures and places,” says the 43-year-old Villar.

In fact, by the second day of the voyage, people who were strangers the day before are joining one another for meals, exchanging tidbits about their lives and travels experiences, sharing binoculars and photo tips. One couple’s luggage didn’t arrive so they are traveling with mostly borrowed clothes.

There is a sense of adventure and unpredictability of it all because we don’t know exactly what we are doing next—we don’t know when we might see a polar bear or a walrus or exactly where we will hike or be able to kayak. In between there are excellent meals (burgers fries and three kinds of salad for July 4th!) and lectures—one on glaciers this morning, another on photographing the world this afternoon by National Geographic photographer Chris Rainier this afternoon.

Some pour over texts on wildlife in the well-stocked library while others simply relax with a massage (yes, there is a therapist on board). They go to the sauna and work out. Mostly everyone seems glad to have left every day concerns behind. I certainly am.  Internet connections are spotty at best which seems a good thing.

The few kids on board, of course, have an entirely different perspective. The ship is bigger and the food better than 9-year-old  Evie Plunkett, traveling with her grandparents from Texas,  expected, she says.

After the polar bears, the best part of the trip is having ice cream both at lunch and dinner—a treat she’s not permitted at home.

Twelve-year- old Henry Douglas, meanwhile, here from New York City, notes that the never-ending daylight, despite black out shades, make it hard to sleep.  There is a scavenger hunt of the ship (What room would you find maps on a table and hot chocolate? How many windshield wipers are on the bridge?  What color are the lifeboats?)

“I teach kids presence, timing, tone and place,” guide CT Ticknor told me over breakfast. “You can be negative or choose to be positive, wherever you are and whatever you are doing…You aren’t just taking a photograph, you are making a photograph in order to tell a story,”

She gives the duo an assignment: Write down things they see that are different colors.  This would work on any trip, of course.  Fashion an alphabet based on where they are. CT and Evie were beginning to work on a photo calendar she was going to present to her grandparents. “I’ve been telling them thank you a lot,” she says.

By the end of the trip, I think, they’ll be thanking Evie—for allowing them the privilege of seeing this wild and amazing place through her eyes.

NEXT:  Food court for the animals