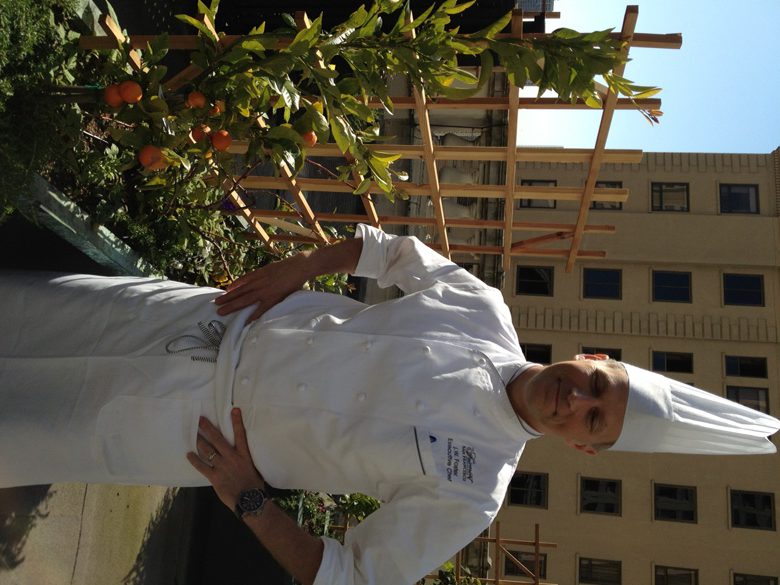 DAY One — Honey anyone?

If you’re staying with your kids at the iconic Fairmont San Francisco atop Nob Hill  you can show them that the honey in their salad dressing or muffins or tea comes from the bees who live right here in beehives in the hotel’s culinary garden. (The kids can see them flying around the lavender through the glass.)

The Fairmont San Francisco’s Executive Chef  jW Foster installed the beehives in the hotel’s 1,000-square foot culinary garden to help support the bee population which has dropped 90 per cent since the 1980s.  (Learn more with the “Chef’s Apprentice” package)

The garden, right smack in the middle of some of San Francisco’s priciest real estate, boasts lemons, kumquats, edible flowers, all varieties of herbs.  It was one of the first in the city.

Chef Foster has made a great effort since he arrived two years ago to improve and upgrade kids’ menus as well as adults—a Fairmont-wide initiative but especially notable here at this historic hotel that was Fairmont’s first. (Fair was for James Graham Fair whose daughters inherited the property from their father and built the hotel and Mont because the hotel is at the top of the city’s famous Nob Hill.)

The Fairmont was set to open April 18, 1906—the day of the Great Earthquake. It survived but the interior was destroyed by the fires that ravaged the city afterward. The hotel opened exactly a year after the earthquake and has been a San Francisco icon ever since. (Tell your daughters: The interior was designed by a young woman, Julia Morgan, the first female graduate of Ecole des Beaux Arts in Paris.)

There  is much history here—from the Cirque Room, the art deco lounge that was the first bar to open in San Francisco to celebrate the end of Prohibition, to the fact that the U.N Charter was drafted here.  Tony Bennett sang “I Left My Heart in San Francisco” for the first time here in December 1961.

Kids will love the huge ornate lobby and the recently uncovered domes in the Laurel Court lounge and restaurant. The morning we’re here, a half dozen are busy playing cards as their parents finish breakfast.

It is worth noting that though this is one of the most exclusive and historic hotels in San Francisco, nearly every table at the Laurel Court at breakfast had kids at the table. And wherever you go in San Francisco, there are opportunities to teach kids about food.

Whether for breakfast or dinner, Chef Foster notes that today’s sophisticated traveling kids don’t want a steady diet of chicken fingers or mac and cheese, though that remains on the menu.  “They order pate and quinoa,“ he said.

He noted that the gluten-free items on the menu have become huge sellers for children as well as adults—everything from gluten-free pizza to gluten-free muffins. There are vegan options as well. As well as hearth healthy and low fat

“Kids palates are definitely changing,” he said, That is why the hotel will also allow parents to order smaller portions of regular menu items for kids as well

Meats and vegetables come from local purveyors; seafood is sustainably caught, according to directives from the Monterey Bay Aquarium. Even the offerings at Tonga Room—popular since 1945 and recently restored with a $1 million renovation—has had its kids menus updated with everything from a Keiki platter with BBQ pork ribs, spring rolls and chicken satay to Little chow chow (wok flashed vegetables and noodles and grilled teriyaki chicken0. Adult menus are lighter too, Chef Foster said, with simpler sauces and less sodium.

Upstairs at Laurel Court kids might have  whole wheat  pancakes (chocolate chips optional) and a fresh smoothie with house honey for breakfast, organic weeds (salad) and everything from local butternut squash and apple bisque to stir fried brown rice with pineapple tofu, sesame rice noodle salad, grilled chicken or salmon with brown rice—all gluten free as well as healthy. Food is as locally sourced as possible,  the chefs working directly with local farmers and ranchers to create a an authentically local taste of the region—from house-made pate to  duck breast  to San Francisco’s famous fish stew Cioppino.

What a great spot for dinner!  We certainly thought so.  More Cioippino, please.