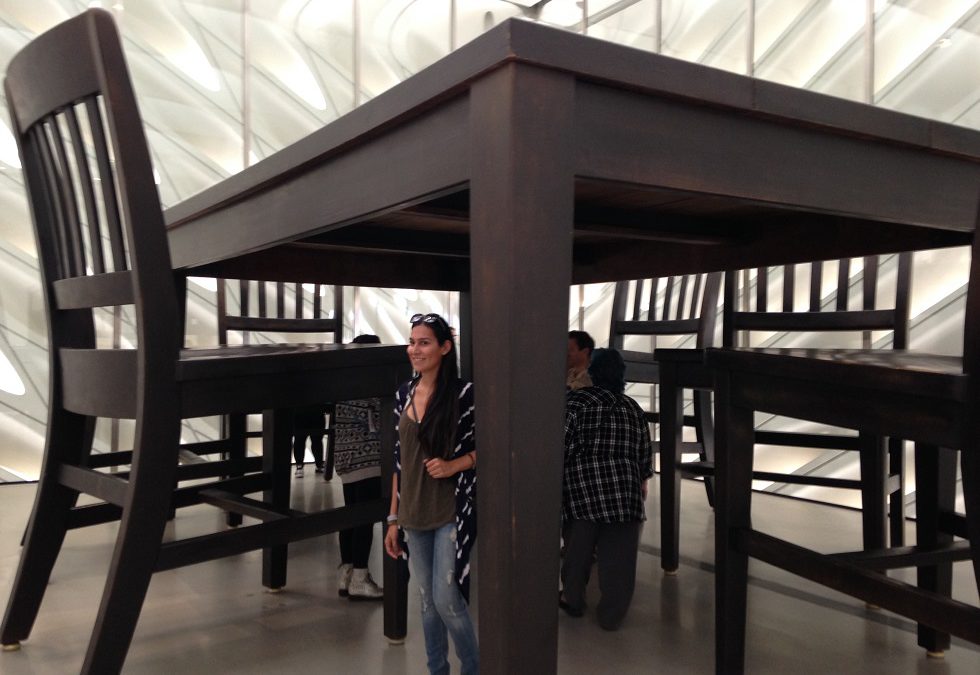 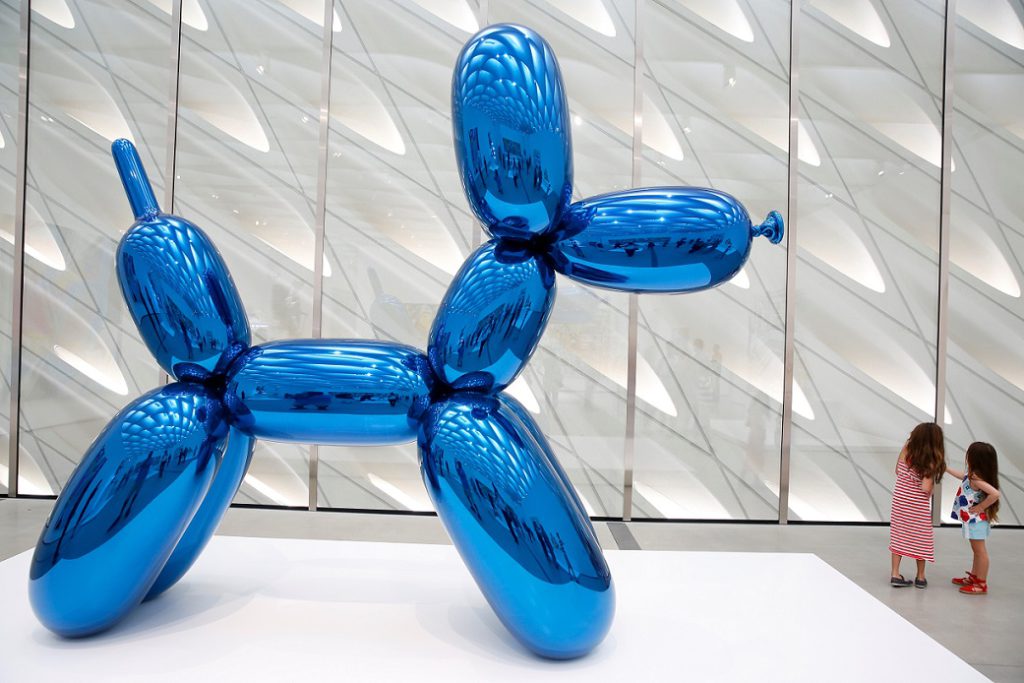 There’s a long line waiting for the doors to open.

But this wasn’t a big holiday sale. People were waiting for the chance to get free tickets to The Broad, Los Angeles’ newest contemporary art museum. In its first year, the museum has had more than 820,000 visitors, nearly triple its pre-opening projections and, museum officials report, it’s the largest first-year institution in the United States in recent years to do so.

Tickets are free and to be sure of getting in, visitors book advance reservations (they are available exactly one month ahead and book up quickly). Many opt to wait on the standby line in the hopes of getting in. On weekends, the wait can be as long as three hours.

With its striking building and one of the world’s leading collections of post-war and contemporary art, donated by Eli and Edye Broad, it’s easy to appreciate why visitors to The Broad reflect not only unprecedented diversity (more than 60 percent identify themselves as non-Caucasian) for an art museum, but visitors are also dramatically younger, including many children. Seventeen percent of those visiting have kids in their group, as compared to the national art museum’s average of just 11 percent.

And Broad visitors are not particularly art smart. In fact, the vast majority say they know very little about contemporary art.

To that end, a free downloadable app can easily enhance a visit and includes several audio tours, including “Looking with LeVar,” a family audio tour narrated by LeVar Burton. Interestingly, the museum reports that nearly half of its visitors heard about the museum through social media.

I’ve rarely seen kids so engaged at an art museum without a docent-led family tour or activity. Here, they were fascinated by Jeff Koons’ famous giant Balloon Dog (blue) and Tulips, an illusion of balloon flowers made of mirror-polished stainless steel, and a very popular selfie site. 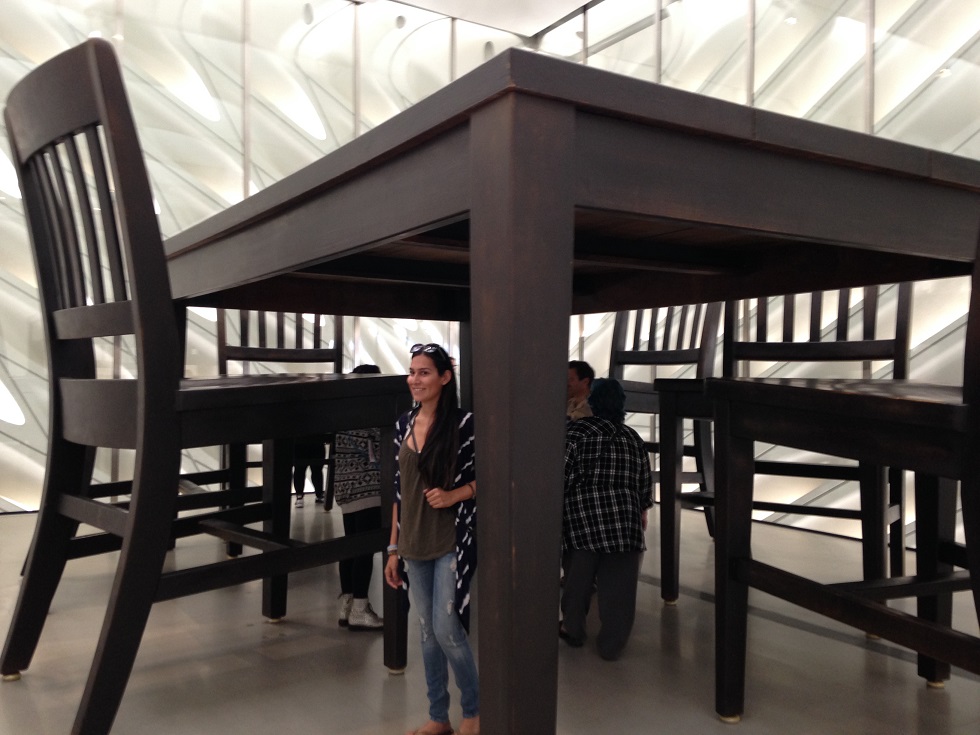 Robert Therrien’s nearly 10-foot-tall table and chairs. The “Under the Table,” sculpture is designed to make us remember what it felt like to be under the table as a small child

Kids waited in line to enter Yayoi Kusama’s Infinity Mirrored Room, an immersive installation with LED lights reflecting in the mirrored spaces and took selfies standing next and under Robert Therrien’s nearly 10-foot-tall table and chairs. The “Under the Table,” sculpture is actually designed to make us remember what it felt like to be under the table as a small child. And they gaped at Takashi Murakami’s massive 82-foot-long “In the Land of the Dead, Stepping on the Tail of a Rainbow,” complete with Taoist hermits with magical powers, a dragon, a frog — all reminiscent of contemporary Japanese cartooning and culture, though rooted in the traditions of 18th-century Japanese art.

Wow! The adults didn’t know where to look either. Los Angeles, of course, is famous for Hollywood, its beaches and theme parks. But when I was working on my Kid’s Guide to LA, I discovered that LA’s museum scene has a lot to offer families, especially now.

Since the Broad opened, pedestrian traffic has increased along downtown Grand Avenue and street life has expanded with food trucks, street musicians and restaurants. We stayed nearby at the Omni Los Angeles Hotel at California Plaza, a great base for exploring. It’s close to the Walt Disney Concert Hall and the Museum of Contemporary Art (and a good deal this holiday season with the “Stay, Save, & Be Merry” promotion.)

We had a fun lunch nearby at the historic Grand Central Market, a downtown landmark since 1917, that attracts everyone from those working at nearby office buildings to hipsters to families for everything from popular egg sandwiches at Eggslut, tacos to homemade sausage at Berlin Currywurst, artisanal ice cream, locally brewed beer and oysters.

The winter — especially after all the holiday gifts are open and tossed aside — can prove a great time to visit a museum or two. The key is to choose exhibits that will engage kids as much as the Broad does.

“Kids forget that there are great museums to check out in LA,” said Christopher Morales, who grew up here and is now a college student on the East Coast. His pick: the GRAMMY Museum at L.A. Live. “Because music has had such a strong impact in history,” he said, “this museum gives people a moment to reflect on what the music meant during a specific era.” For kids, he added, “the interactive stations for visitors to create their own music and learn how music is made.” And parents can introduce their kids to what they listened to growing up.

There are many museums to choose from, including the J. Paul Getty Museum with locations at the Getty Center in LA and the Getty Villa in Malibu with interactive family rooms and activities. Here are three others guaranteed to please LA museum picks for families, all located on the city’s so-called Museum Row:

— The LA County Museum of Art, known as LACMA, which offers free admission to anyone 17 and under, as well as one accompanying adult through the youth membership program. Kids especially love the sculpture gardens, the Boone Children’s Gallery where they can create art and Andell Family Sundays, which offers special tours. Make sure to pick up a special family guide with activity cards.

The Petersen Automotive Museum displays trucks, buses, limos, SUVs and Model Ts and also offers a kids’ Discovery Center in the Cars Mechanical Institute, inspired by the film “Cars,” created in partnership with Pixar. There are interactive stations to help visitors learn how cars work and you can paint and personalize your own virtual cars. Check out CARSpads to play the “Build a Virtual Racecar” game. Come on a Family Discovery Day!

Page Museum at the La Brea Tar Pits, which many kids think is the best museum in LA. It’s the world’s most famous Ice Age fossil excavation and an active Ice Age dig site where you might see discoveries being made right in front of you. See how Ice Age creatures got trapped in tar and are still being unearthed. Watch up close at the Fossil Lab as scientists work. Play in Hancock Park, right in the middle of the La Brea Tar Pits. Roll down the hill.

Who said museums were boring?