Solving a 150-million-year-old Mystery in the Wyoming dirt 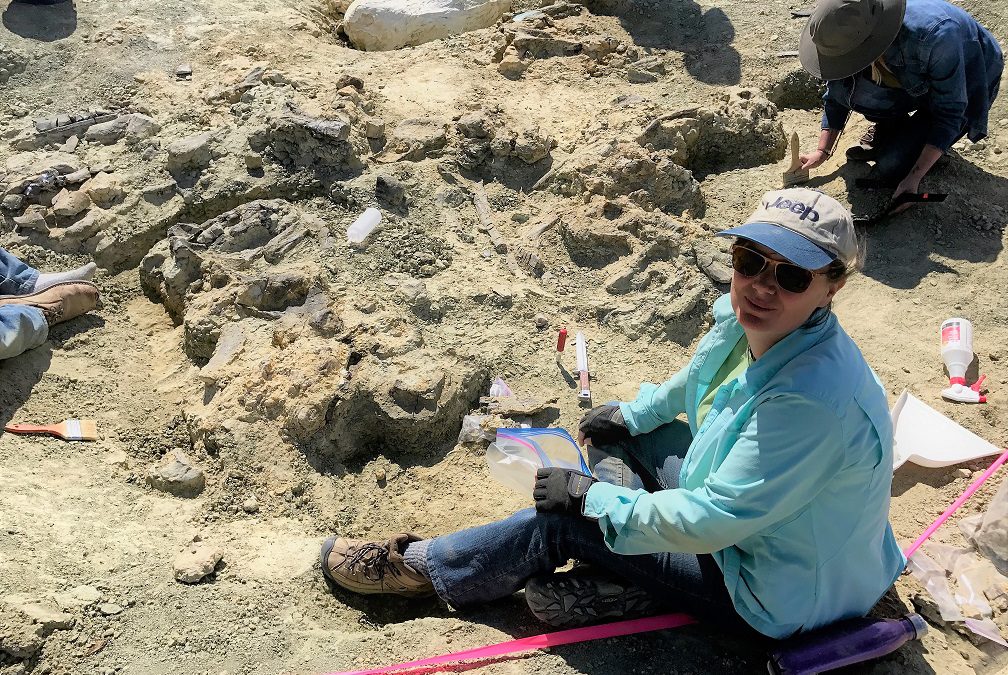 CODY, Wyoming — Who knew? By studying fossils of dinosaurs, scientists not only can figure out what these ancient creatures looked like 150 million years ago, but how they moved, what they ate and how they died.

Those at The Jurassic Mile site in northern Wyoming —said to be one of the most significant dinosaur finds in North America- can look at the bones and determine how much these creatures weighed. Paleontologists can calculate, using computer models, how fast they grew, and even how they healed from bone injuries and diseases.

“There are many routes into paleontology,” says Prof. Phillip Manning, the lead scientist on the project who is a Scientist-in-Residence at the Children’s Museum of Indianapolis and the Chair of Natural History at the University of Manchester in England. “But what I can’t teach is passion and enthusiasm…If you have the passion, you will find a way into the field.”

“We learn from each other,” said Dr. Anne Schulp, a research at Naturalis Biodiversity Center in Leiden, the Netherlands, another partner on the project and a professor of Paleontology at Utrecht University.

And there are applications for today’s world, Prof. Manning explains. He notes that his team at the University of Manchester uses “super computers” that permit them to develop evolutionary algorithms that help their models “walk.” “Given that dinosaurs are bipedal, like us,” he explains, “the software control systems we are developing can be used by robotics folks to help better control movement in prosthetic limbs.”

“We are about to embark on a major human brain mapping exercise to look at the  chemistry of both healthy and ‘sick,’ brains,” he said.

At the dig site, the work is painstaking and slow in the dry heat where teams of 30 carefully uncover the bones, map and catalog where they were found and then  prepare them in plaster casts to be moved to The Children’s Museum for further study.

The Jurassic Mile and the dig are in the Morrison Formation that runs from Canada south to New Mexico—some 745,645 square miles. It is the most prolific source of dinosaur fossils in North America and this site is an especially rich find.

The most commonly used tools here are “air power” devices — type of pneumatic jackhammer that can separate surrounding rock from a fossil.  A wide variety of glues help keep fossils in place.

“Imagine you are playing pick up sticks and the sticks are all in concrete and you have to pick up each one without damaging any of them,” said Dr. Virginia Egerton, one of the lead scientists.

She bends to look at fossils of ancient plants and explains that in the past dinosaur hunters would likely have thrown these away and were only interested in the bones. But such plants help paint a far fuller picture of the Jurassic environment, she explained.

Each fossil is issued a field number, used to keep track of what is excavated where and when.  Detailed maps are made to show how each bone was found — was it connected to other bones? In a jumble?

The fossils are carefully prepared for their journey , wrapped in burlap strips dipped in plaster. Rocks will be removed later in the lab where Museum Paleontologists work to clean, fix and stabilize the fossils. All of the work is carefully documented.

Already nearly 600 specimens weighing more than six tons have been collected. Some are on display already at the Museum.

But says Dr. Egerton, 20 years won’t be nearly enough time to explore all that is here.

“The potential — that’s what is so exciting,” she says.