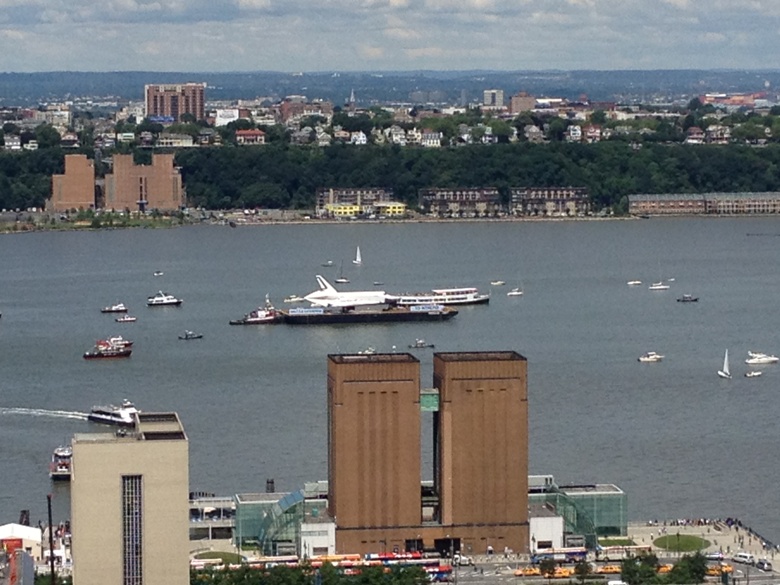 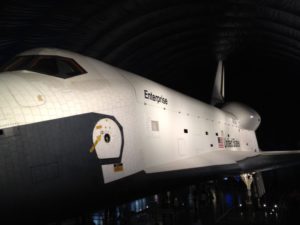 On June 5, the space shuttle Enterprise made her triumphant journey to New York City flying piggyback atop a Boeing 747 from Washington, DC into JFK airport. Then, amid much fan fare, she traveled by barge up the Hudson River to her new home on the deck of the floating museum and WWII aircraft carrier, the USS Intrepid.

After months of competitive bidding from museums around the country, NASA awarded Enterprise to the Intrepid Sea, Air & Space Museum in Manhattan, where she is the museum’s newest star.

The other shuttles of the retired space fleet, Endeavour, Discovery, and Atlantis, have been awarded to museums around the country.  Last week, Taking the Kids had an opportunity to visit the space shuttle exhibit.

Walking into the Enterprise dome, you’re awed by the shuttle’s size.  Dwarfed by her wide, black wings and smooth underbelly, Enterprise is a testament to the 1970’s engineering that carried Americans to outer space and back for over 150 missions.  A prototype shuttle, Enterprise was not designed to fly in space; however, she provided NASA engineers their first feedback as to how their blueprints flew and landed.

The museum houses the shuttle in a futuristic space bubble that sits on the stern flight deck of the Intrepid.  From afar, the shuttle is impressive simply because of her size; she dominates the space.  However, up close, the little details begin to color in her fascinating past.  Don’t be shy with questions, museum guides inside the pavilion roam the room striking up conversations and telling stories about Enterprise. 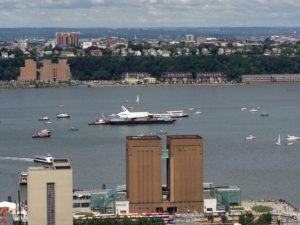 Enterprise being ferried to Intrepid Museum on the Hudson River

One interesting anecdote about the shuttle is that she played an important role in the accident investigation into the space shuttle Columbia disaster.  In 2003, Columbia broke apart during reentry and all seven astronauts aboard lost their lives.  To help investigators figure out what had gone so wrong, Enterprise was brought out of storage. Testing their theory that a piece of foam broke off the fuel tank and damaged the shuttle, investigators used an air gun to shoot foam blocks at Enterprise’s wing and replicate the damage.  With her help, they eventually concluded that the foam’s impact had in fact caused Columbia’s disintegration.

Along with watching footage from Enterprise’s test flights, visitors can climb onto a platform and come nose-to-nose with the shuttle for a photo-op.  Trekkies can see pictures of the Star Trek cast posing with the shuttle after a letter writing campaign from the show’s fans petitioned then-President Ford to name the shuttle after the fictional Starship Enterprise.  And although NASA formally ended the space shuttle program last year, visitors can learn about the space program’s newest destinations: the International Space Station, Mars, and galaxies beyond. And make sure to check out the gift shop with plenty of military and space souvenirs to take home!

Enterprise is now a permanent part of the Intrepid Museum, though her current location on the flight deck will change.  The museum is planning to build a permanent facility for the shuttle adjacent to the aircraft carrier in the next 2-3 years to be able to welcome even more visitors.