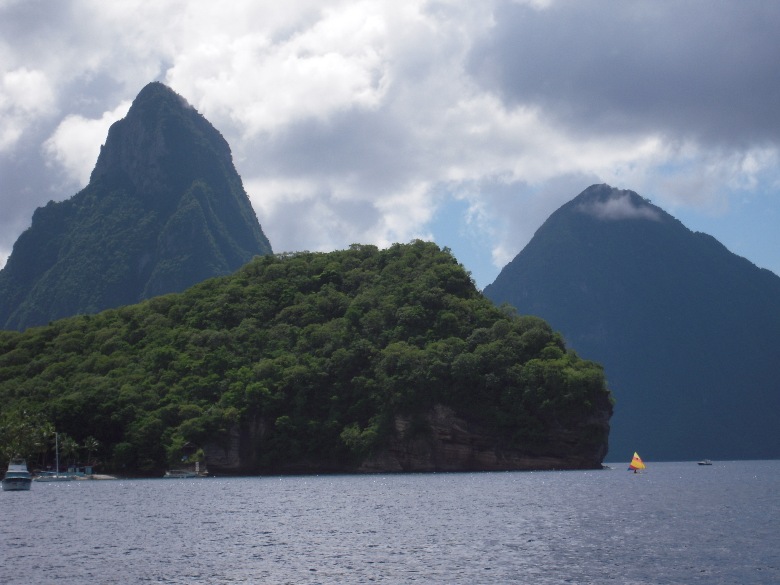 It’s not even 10 am and already they are handing out the rum punch!

We’re on a catamaran courtesy of Carnival Sailing that will take us from the north part of the island where we are staying at The Landings resort to the town of Soufriere (which translates to “sulfur in the air,” we’re told). Along the way we have spectacular views pf St Lucia’s claim to fame — Petit Piton and Gros Piton. They look like giant snow cones actually jutting out of the ocean. But the two peaks—yes you can climb the 2,600-plus heights—are actually lava domes, part of what makes this island different. They were formed from a volcano.  While we are here, we are taking a tour of the “Caribbean’s only drive-in volcano,” which our tour guide Ruthy Victorian tells us is 1,000 feet above sea level. It smells like rotten eggs–all the sulfur in the air—and there are plenty of steaming mud pots, Eighty people still live on the edge, Victorian tells us, farming the rich volcanic soil, and there are natural hot springs that draw locals and tourists alike for their redemptive qualities. Too bad we don’t have time!

It seems crazy that we’ve gone from a lazy sail along spectacular coast to boiling mud pots with temperatures over 300 degrees. Of course St Lucia has rain forest too! What an island! There’s a lot more to do here but swim and sun—assuming you can get the kids away from the pool or the beach!

There are some two dozen bubbling pools a mixture of rain water, heat and sea water, with the heat coming from the magma a mile down. I didn’t expect a geology lesson today but I’m glad for it!  The colors of the rock are amazing–everything from black to brown to yellow—all the colors of the minerals from iron to sulfur to calcium oxide and more.

After our short trek in the national park, we head a short drive away to the private Diamond Botanical Gardens and Mineral Baths. It seems Louis XIV’s soldiers recognized the medicinal properties of the water as far back as 1713 and built some baths here. We gawk at the mineral waterfall spewing water of all colors-black, yellow, sparkling. Along the way, our energetic tour guide Peter Simon tells us about the plants and flowers growing here–avocado and banana, sour sop and nutmeg philodendron growing 20 feet tall,  and all kinds of beautiful tropical plants–orange, yellow and red, many I’ve never seen before. If only it weren’t so hot! I’m glad to have seen the island’s famous Pitons from the boat, then to have seen the volcano with its bubbling mud pots and then the waterfall of mineral water where legend has it Empress Josephine, Napoleon’s wife, bathed as a child. The water is supposed to be a cure for everything from skin ailments to join problems, mosquito bites to sun burn. But swimming is no longer permitted here.

Our group adjourns a few miles away to a small inn called Villa de Pitons up a steep hill and then a steeper flight of stairs where we’re treated to a gorgeous view of the pitons and the pastel-painted Caribbean houses spilling down the hillside to the coast, fishing and sailing boats bobbing in the water.  (www.villasdepiton.com).

We’re treated to a feast of local foods many that we’ve seen growing at the farm yesterday and in the gardens today-breadfruit (very bland) plantains (similar to yams) barbecued chicken and lamb, Creole tuna,  Dasheen (not much flavor at all-a kind of squash)  Yum!  They serve us rum punch too!

Is it time to go back to the boat already? We stop at Anse Cochon which roughly translates means Bay of Pigs—obviously not that other Bay of Pigs.  Centuries ago, this area was known for swimming wild pigs. Today there are none-just colorful fish, as it is a marine sanctuary. They are blue and striped and yellow. It’s so nice to get some water time!

Locals like Justin Marcellin pull up a long side hawking everything from Conch shells to bracelets and necklaces. Business is not too good, he says. We tell him his prices are too high ($20 for a Conch shell!). He bargains with a honeymoon couple who buy a small trinket for a few dollars and everyone leaves happy.

After another gorgeous sunset and a much needed shower, we head down the road to Coco Palm, a boutique hotel where Richardson Skinner holds forth at the Ti Bananne restaurant where he’s won a following with locals as well as tourists for his original twist on French and Caribbean cuisine.  “All local vegetables, fresh fish,” he tells us He urges tourists to try vegetables they might not have eaten before—fruits too—dasheen, casaba, guava. “I use French technique and Caribbean ingredients,” he tells us. The restaurant, with colorful murals of local women toting bananas on their heads, ceiling fans overhead that has just 16 tables and Chef Skinner buys produce from local farms—like the Richards farm that we visited.

We feast on cream of pumpkin soup with sautéed gingered shrimp, grilled shrimp and Pineapple brochette with tamarind chutney, fresh snapper glazed with orange and ginger served with Dasheen and Roasted pumpkin Jerk Baby Back rips with plantain. Is there room for desert?

Of course—especially when it is a warm Cassava “Pone” a kind of nutty cake served with fresh Banana Ice cream.