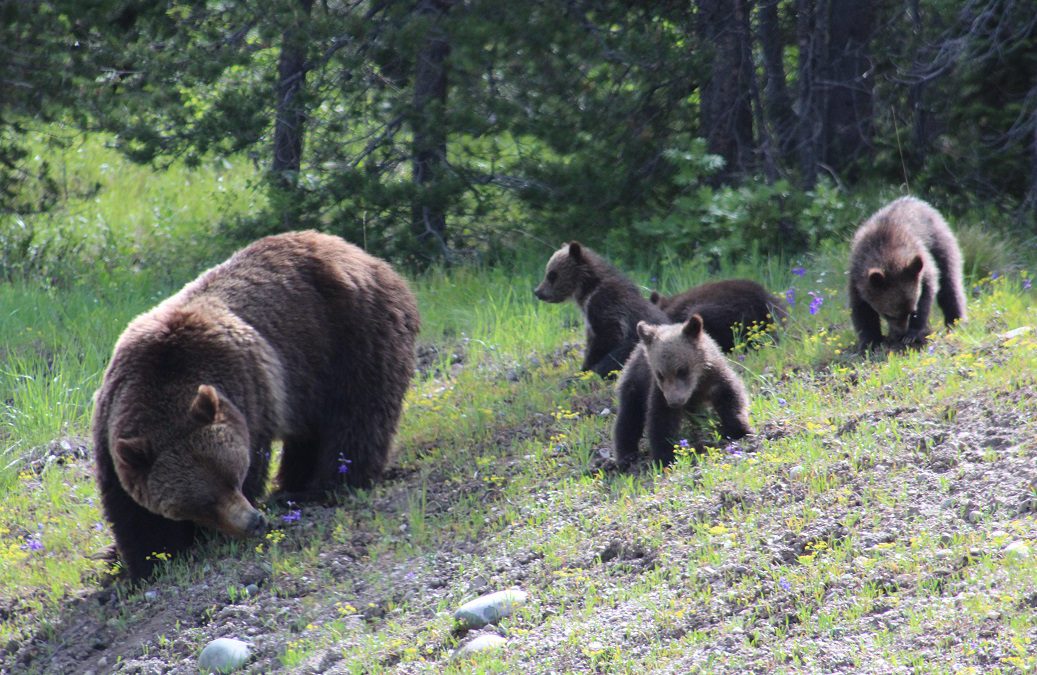 Cars were stopped in both directions. The gawkers and paparazzi were jostling for the best shot without regard to social distancing, nor had they stopped to put on masks.

The object of all of this attention and her four playful cubs was oblivious to the commotion. Meet Grizzly #399, perhaps the most famous bear in North America not only because of her advanced age (24) but her fertility (she has had seven litters — 20 cubs.

“This is such a rare opportunity,” said Dawson Smith, the resident naturalist at Spring Creek Ranch in Jackson Hole, Wyoming, where we were staying, who was guiding us through Grand Teton National Park one day recently. “This is really exciting.”This year’s quadruplets, Smith said, account for only 2 percent of grizzly bear litters. Grizzly #399 has her own Facebook page, Instagram feed and bumper stickers.

Yes, the site of her and her four cubs, perhaps 25 pounds each, was amazing, but it’s important when visiting national parks that you aren’t in a zoo, Smith and other experts say.

Already this summer, a woman was knocked over by a grizzly and another, getting too close too many times to a bison for the best photograph, was gored so badly she had to be hospitalized. A black bear was euthanized after wandering into a family’s back country campsite and biting one of the adults and children.

At the Grand Canyon, meanwhile, one woman hiking into the canyon died, overcome by heat, and another fell off the rim (stay six feet from the rim!)

As well as keeping our distance and wearing masks to avoid contracting COVID-19, it’s imperative as we flock to national parks to consider what else we must do to keep ourselves and our families safe.

As we were setting off on a hike in Yellowstone National Park, EMTs arrived to rescue an ill hiker. Yellowstone has very limited Wi-Fi and cell service. Before you set out, make sure you have a first-aid kit with you and ask the park rangers how to reach out for help in an emergency.

Stay on the trails! People invariably get injured when they wander off trails and boardwalks . that are designed to protect them from the scalding thermal features like bubbling mud pots and pools, as well as geysers. It’s equally important at other parks. You don’t want to fall into a waterfall, river or of a mountain ridge.

Pay attention to the temperature! At the beach as well as a national park. In summer, it can be up to 115 degrees in the Grand Canyon — in the mid-90s at the rim. Be prepared for the excessively hot temperatures, Grand Canyon officials urge. Hikers should hike before 10 a.m. and after 4 p.m., rest in shade whenever possible, and avoid hiking during the heat of the day. Balance food and water intake, drink when thirsty, including water with electrolyte replacement, and get wet to stay cool. (A spray bottle filled with water can help. So can a water bottle with its own filtration system so that you can replenish your water supply wherever you are. I use one from LifeStraw, which provides safe water to over a million kids worldwide. (Collapsible squeeze bottles with a long-lasting filter start at $34.95.) Look for clothes that protect from the sun and help regulate body temperature, like with Thermoregulation technology from Royal Robbins or with HydroFreeze X Technology from L.L.Bean.

Know the symptoms of heat exhaustion — pale face, nausea and vomiting, headache, cramps. Drink water with electrolytes, eat high-energy foods (with fats and sugars), rest in the shade for 30 to 45 minutes and cool the body by getting wet.

Heat stroke, meanwhile, is life-threatening and happens when your body loses its ability to cool itself. There are cases at the Grand Canyon every year, officials say. What to do: Send someone for help immediately while you remove their excess clothing, fan them and continuously pour water on the victim’s head and torso.

Never feed wildlife. Keep your food, trash and water inaccessible to them. Consuming human food not only is unhealthy for wildlife, but can also encourage aggressive behavior that may require animals to be destroyed, park officials say.

Be bear smart! Grizzlies are larger than black bears and have a distinctive “hump” on their shoulders and long claws that are suited to digging, not climbing trees. Black bears have short curved claws that make them adept at climbing trees. And only about half are actually black. The rest are brown, blond or cinnamon in color.

Watch for fresh tracks or scat. Make noise and hike in groups. Never hike alone, as the woman who was knocked over by a grizzly had been. If you see a bear, do not run but back away slowly.

Got your bear spray? (Be forewarned you can’t bring it on a plane.) It is the most effective means of repelling an attacking bear, according to the U.S. Fish and Wildlife Service. Make sure you know how to use it. (The idea is to put up a cloud of spray between you and the charging bear. Watch a video in which three Yellowstone employees share their story about a surprise encounter with a grizzly or listen to a podcast about a family whose hike in Yellowstone taught them how important it is to carry spray.)

Keep your distance — at least 100 yards from bears and wolves and at least 25 yards from all other wild animals.

Dawson Smith explains that over the years, 399 — and her daughter 610, who also is often visible with her own cubs (so named from times they were banded for research) have learned that people won’t hurt her, thus she believes her cubs are safer near the road than where a big male grizzly might make a meal of one of the youngsters.

Even a bear that seems as oblivious to humans as Bear #399, Smith says, could charge, especially if she senses her cubs are threatened.

He shook his head at the growing “Bear Jam.” Respect the bear’s space — and that of other animals.

This is their home, after all.