Take me back to Chicago – for a father-son weekend and the Cubs! 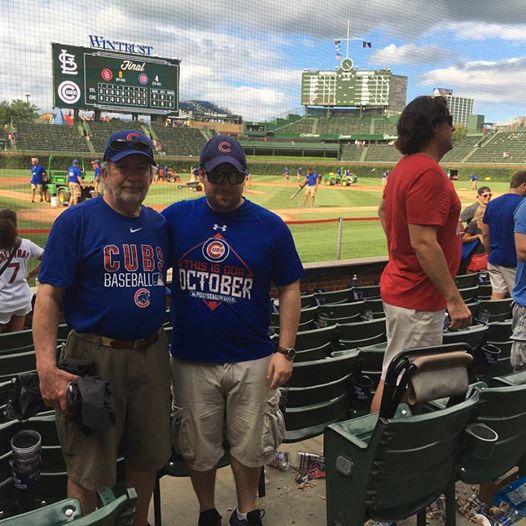 CHICAGO — Eileen Ogintz, the esteemed author of Taking The Kids, once said: “You can go home again.” At least I think she did. We met in Chicago, married in Chicago and had three kids in Chicago. It was our home for nearly 20 years — Eileen started writing Taking the Kids while she was a national correspondent at the Chicago Tribune. Then, 20 years ago, we moved to the East Coast because of a job opportunity for me.

When the kids were growing up I took them to Wrigley Field for a Chicago Cubs game at least once every year. Our oldest, Matt, now 32, became what they call a “Die Hard Cubs Fan” at about age 4 when the pitching coach, the late Johnny Oates, saw him in the stands during warmups and tossed him a baseball.

This past year, with the perennial North Side losers, believe it or not, the best team in baseball so far, Matt suggested that he and I go out to Chicago for father-son weekend. If you aren’t a baseball fan, then you probably don’t know how far the Cubs have come in the past couple of years under new ownership and management and with a “youth movement” of talented players. The fact that the Cubs were playing their arch-rival St. Louis Cardinals added to the appeal. So on Friday and Saturday we found ourselves in the Friendly Confines again, for the first time since Matt was in high school. And Matt came this/close to catching another ball fouled into the upper deck. “I was robbed,” he said, channeling Moises Alou. “Some guy reached out over me from a row back and grabbed it.”

We flew into Chicago O’Hare on a rainy Friday morning, worried that our first game might get rained out. We rode the CTA blue line into the Loop. Matt asked me what the Loop was. It was then that I began to realize he wasn’t all that old (10) when we left Chicago and didn’t really remember much of the city or its history. So from then on I tried to point out notable landmarks and regaled him (as well as bored him) with stories like the time a guy dressed as Spiderman climbed the John Hancock building and the fire department — incredibly — tried to stop him with fire hoses. True that – watch the video! 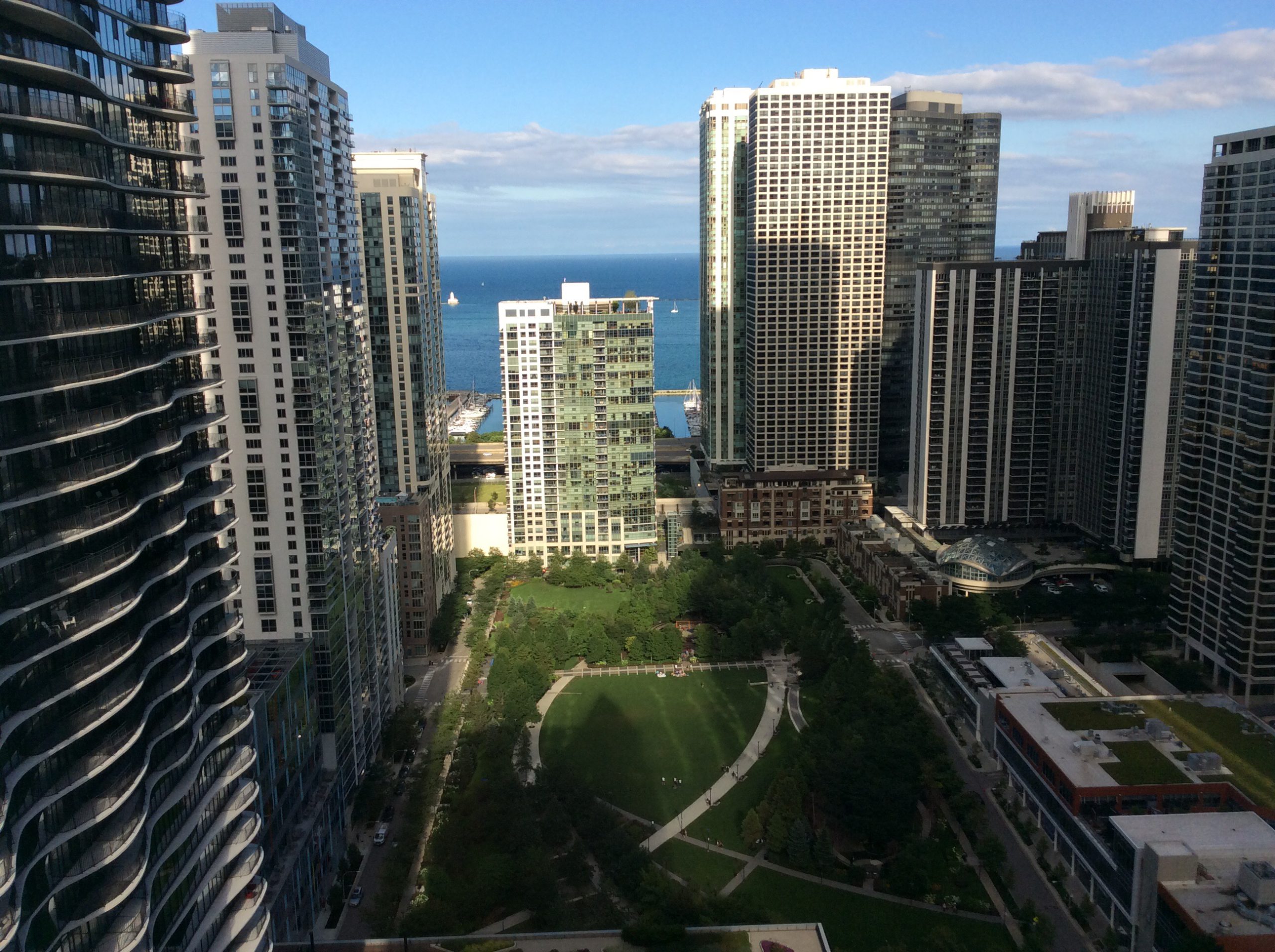 View from the Fairmont Chicago

We set up for the weekend at the Fairmont Chicago, a very convenient spot just steps from Michigan Avenue, a lot of great restaurants and the georgeous Millenium Park. The Gold Lounge, a concierge level service available at the Fairmont, was a great respite after the games as well as for breakfast. There were Cub and Cardinal fans among the weekend guests and some good banter, as you might imagine, occurred over drinks in the Gold Lounge. 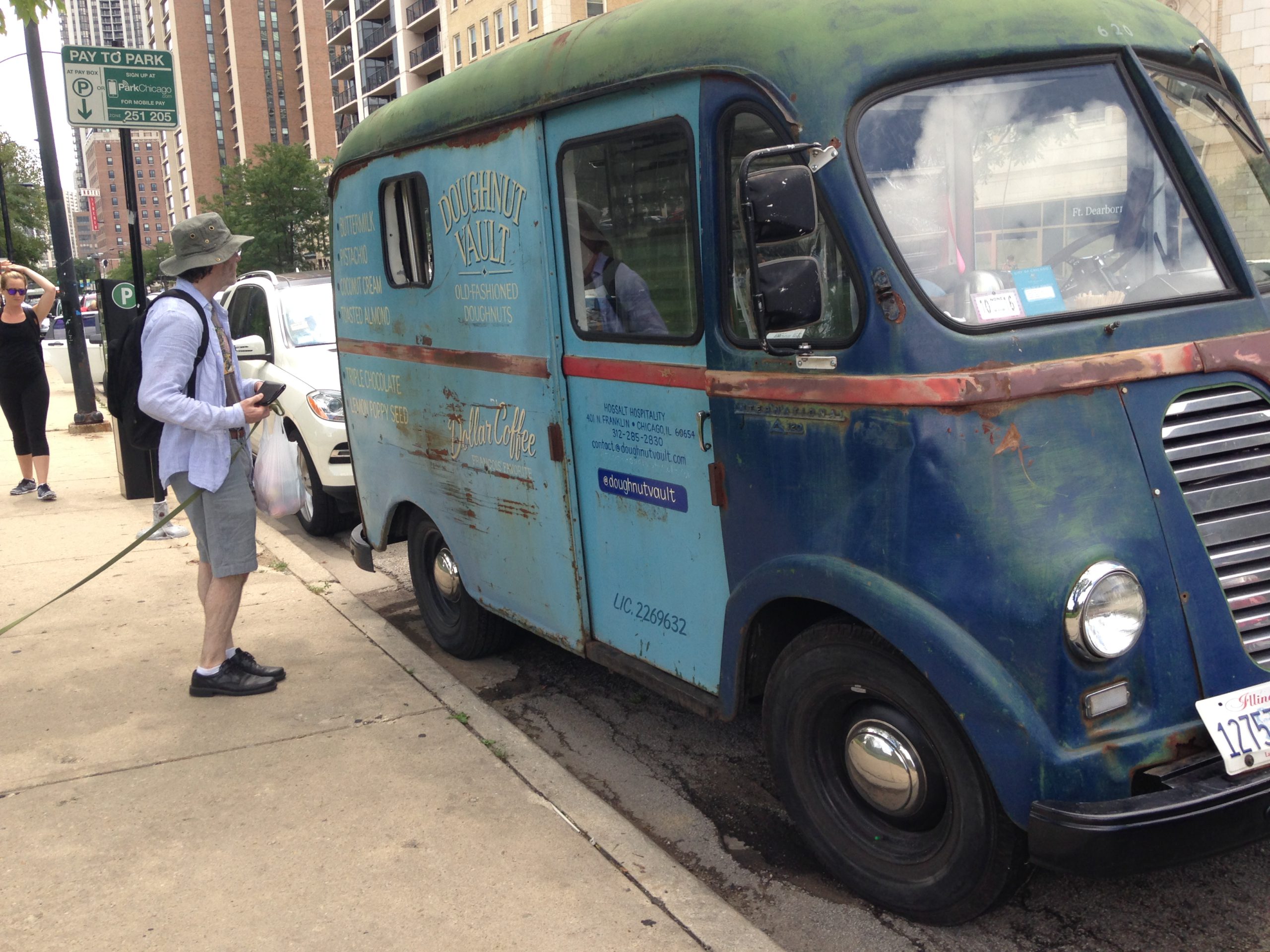 On Saturday morning, with the weather clearing up and temperatures in the moderate 70s, we decided we would walk to Wrigley Field, about 6 miles from the Fairmont. We passed two very active summer farmers’ markets and a variety of street vendors including the Donut Vault, a hippie-style converted van that looked like it might have come from Al Capone’s Vault. It seemed to have a large and faithful following. As we got closer and closer to Wrigleyville, the streets and sidewalks began to fill up with mostly blue shirted Cubs fans. The atmosphere was electric.

At the ballpark the bratwurst and Chicago-style polish hotdogs were not to be missed, along with cold beer (overpriced but, hey, it’s a ballgame). 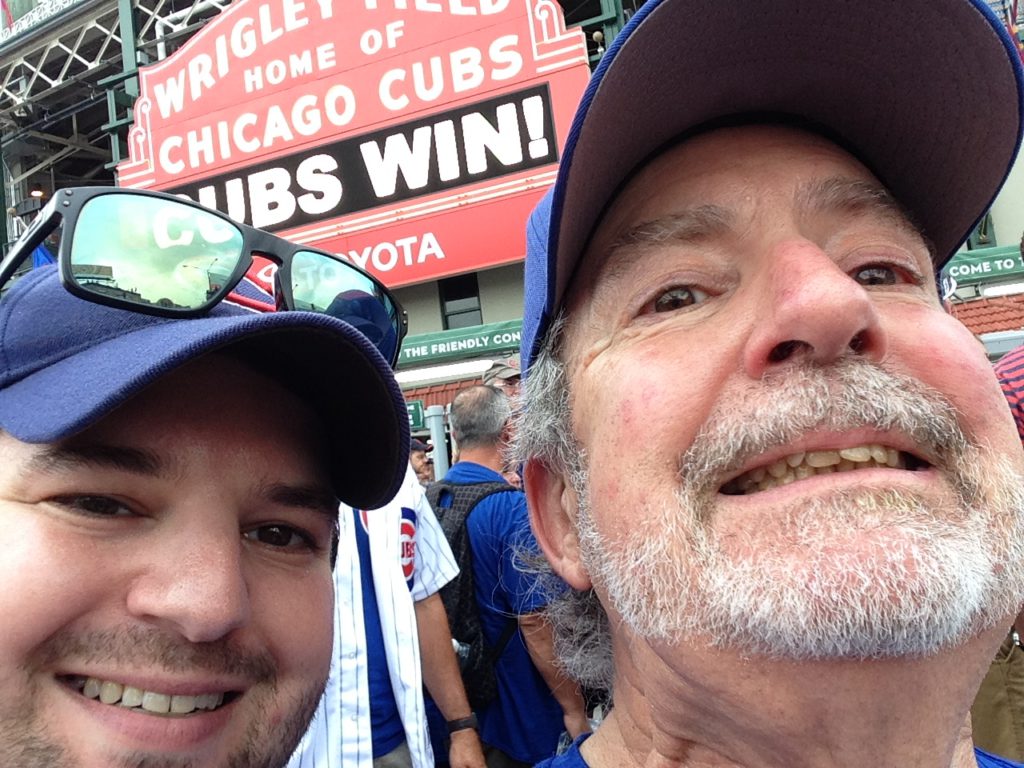 In the first game, the Cubs extended their glorious win streak to 11 with a blowout of the Cards. Matt and I celebrated outside the stadium, where I took my first ever selfie. The next day the Cubs streak came to an end. But no worries, it’s August and nothing bad happens to the Cubs late in the season, right?

We vowed to come back next year, win or lose. We’re certain there’s a World Series title in the near future.