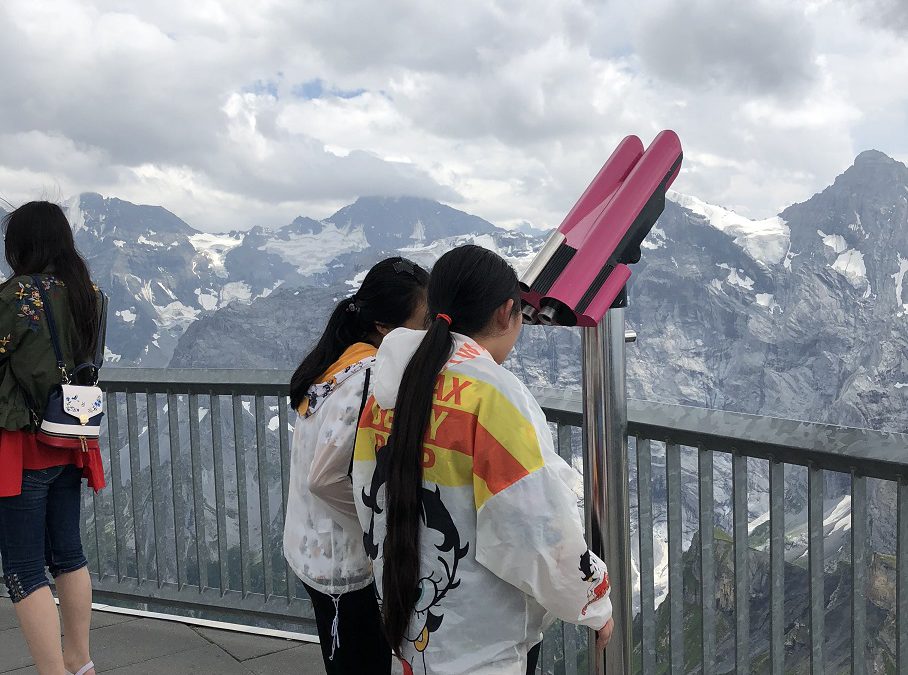 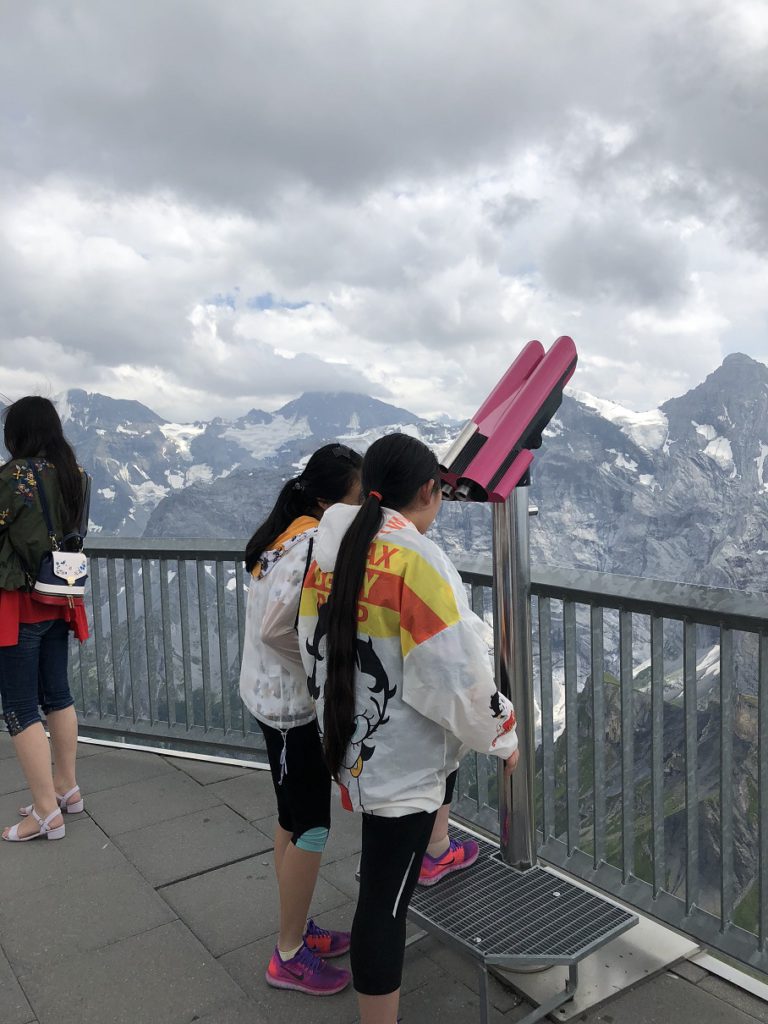 Maybe an authentic Swiss raclette — melted cheese served over boiled potatoes or a tasty Rosti, made with grated fried potatoes and served with an egg, bacon and cheese. Many consider Rosti the Swiss national dish.

“Kids should try the local food here,” says Noa Von Allmen, 12, who lives in the Swiss mountain town of Lauterbrunnen, considered the gateway to the famous Jungfrau mountain region.

“Fondue is really fun because you cook it yourself at the table,” suggested Jano and Rajan Julen, who live in Zermatt.

Noa may not be old enough to drink or drive, but he certainly knows his way around a Swiss menu. He waits tables in this tiny village at the Hotel Silberhorn, which was started by his great-grandparents and is now run by his parents. The Julen boys also help out at their family hotel business, which dates back to the early 20th century.

“I’m glad to help because I get to practice English,” explained Noa. “It’s my favorite subject.”

The Julen boys are simply glad for the tips — so they can buy sweets for themselves and their friends.

Unlike American mountain towns, you’ll find mostly family-run hotels in the Swiss Alps, hotels typically in the same family for generations. Kids like Noa and the Julen boys help just as their parents and grandparents did. (Check out my new Switzerland video, http://ttk-old.o2dev.net/category/travel-diary/#.W316o7hMEdV.)

“I kind of grew up being a host,” said Lars Michel, 23, who is studying hotel management and hopes to be the fifth generation to run Hotel Gletschergarten, his family’s 32-room hotel in Grindelwald. His great-grandmother was the youngest of the hotel founder’s 12 children; his grandmother Elsbeth met his grandfather Finn, a Dane, when he broke his leg hiking and had to stay at the hotel to recuperate. “He never left,” the family jokes.

The traditional Alpine hotel, decorated with paintings of the area done by Lars’ great-grandfather, artist Dani Fullemann, is charming with blooming flowers on all of the balconies and views of the Alps.

“There are enough impersonal chain hotels without charm and history,” he said. “I think it is the time we take for our guests that is the luxury from today rather than marble-tiled bathrooms or golden faucets. That is what I would like to continue doing, just like my parents do this today.”

Lars Michel and his family are proud that they can confidently recommend where to hike based on the weather or where to ski based on ability, as they have hiked and skied the trails and mountain themselves — many times over many years. “We grew up here,” explained his mom, Gabriela Michel-Breitenstein. “We’ve been here for 50 years!” 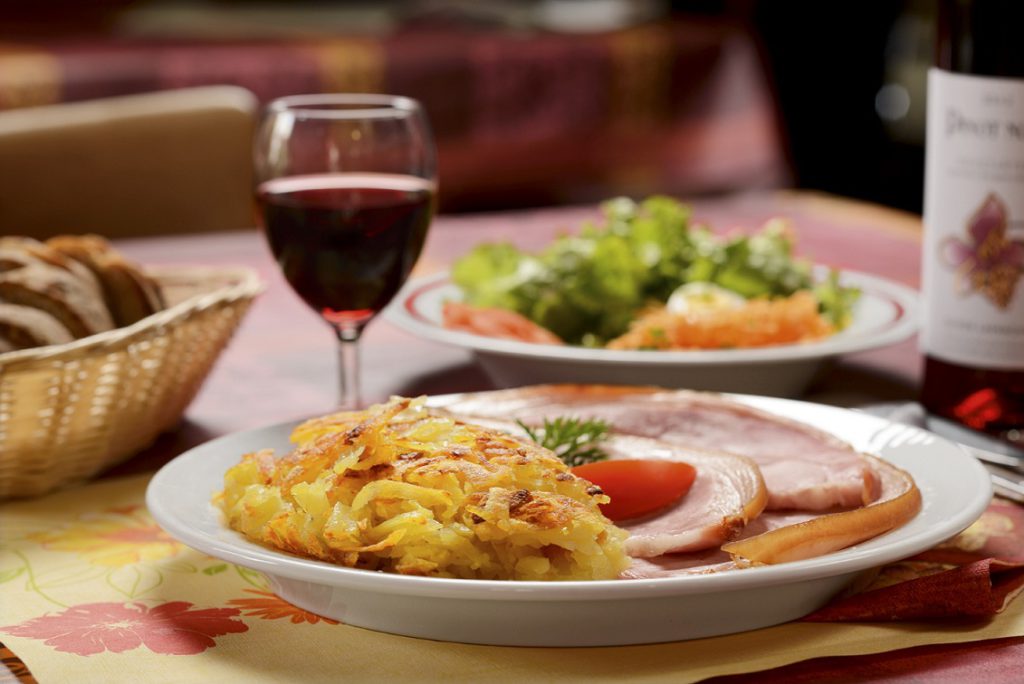 A tasty Rosti, made with grated fried potatoes and served with an egg, bacon and cheese

Even in internationally famous Zermatt, 95 percent of the hotels remain family owned, said Paul-Marc Julen. Tradition Julen now encompasses three local hotels and four restaurants. “We work together and set the rules together,” he said.

What should visiting kids know about Zermatt? “There are no motorcars!” In fact, there are only small electric taxis and hotel shuttles, which greatly add to the town’s charm — and clean air — the Julen boys noted.

The family also raises black-nosed sheep and invites hotel guests in summer to see the sheep up on the mountain where they graze. Like many hoteliers here, Julen explains, the family’s roots were in farming, but they began to offer meals and lodging to mountain climbers who began to flock here in the second half of the 19th century; skiers did not come until after World War II.

“Summer is fun, but winter is better,” said the Julen boys.

In winter, “you can ski any day,” Noa added. Visiting kids should take the cable car up for breakfast at the Schilthorn, take in the views of the Eiger, Monch and Jungfrau peaks and then ski down “with the snow in your face!”

In summer, when we visit, the Schilthorn is tourist central with people visiting from around the world not only for the views from Piz Gloria at the 360-degree restaurant, the Thrill Walk that leads down into vertical walls of the mountain, but also for the interactive Bond World museum. This is where the 1969 “On Her Majesty’s Secret Service” was filmed with its, heart-pounding ski and bobsled scenes.

“Kids who visit don’t know how big the mountains are,” Noa suggested, adding that there is no better place to race down on a bike. “You can go really fast!

What should they have in their backpacks or pocket? He always has his phone, of course, and a power bar; for hikes, sandwiches and plenty of water.

The Julen boys suggest a Swiss army knife would also be a useful tool.

We took the local kids’ advice and enjoyed a traditional Swiss meal at the Hotel Julen’s Restaurant Schaferstube, known for its traditional Swiss fondue and raclette and lamb specialties. On the menu is homemade lamb sausage, lamb stew, grilled leg of lamb, lamb fillet with Indian spices … the list goes on. All were delicious.

Kudos to Alpenwild, the American company that arranged our self-guided hiking trip and chose the hotels that enabled us to not only meet local families but benefit from their advice, especially when the weather wasn’t optimal and we had to adjust our hiking plans.

“We may not know the guests when they arrive,” Gabriela Michel Breitenstein said. “But when they leave, we are all friends.”

“Everything is about storytelling, authenticity and passion,” said Lars. “And that is what I got passed on from my parents.”

As for Noa Von Allmen, who has two older brothers, he’s not sure the hotel business ultimately will be for him. “It is very hard work,” he explains, heading off to wait on another table.