Thar they blow! Humpbacks galore on the Inside Passage 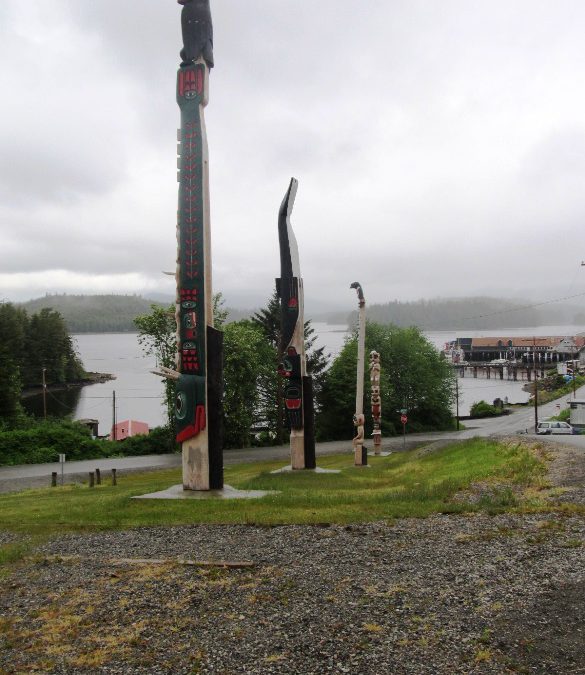 DAY TWO — There’s a spout! There’s a fin! There are flukes!!

We are cruising around Prince of Wales Island in Southeast Alaska aboard the InnerSea Discoveries  Wilderness Discoverer when we spy humpback whales. So cool!  Two are off the bow of the ship!

“We are able to be extremely flexible,” says Chelsea Leven, who is in her fifth season and is our expedition leader. “We stop to watch wildlife… we can rearrange the itinerary.” If there are serious birders on board or hikers or paddlers, the crew can adjust.” Indeed, Captain Dano Quinn seems to delight in nothing more than showing passengers who visit the bridge the Discoverer.  Eight people will even have the opportunity to spend a night in a wilderness camp.

Just being on board is an adventure for many, not the least of which is to meet other passengers from around the world. On our trip, there are four couples from New Zealand as well as families from around the country including two grandmothers and another set of grandparents traveling with grandchildren.

Aaron  English, 14, from Sioux Falls, SD, is here with his grandparents, Suzanne and John Burgess from Tyler, TX .  They’ve opted to take each grandchild on a tip as young teenagers—older granddaughters opting for NYC and Orlando.  “They don’t live near us,” Suzanne Burgess explained. “We decided taking them on a trip we’d get to know them better.”

John Burgess explained he chose this ship because their focus is on the wildlife and the outdoor opportunities to visit places a big ship can’t reach.

And that was certainly the case this morning when we stop at the small Tlingit villageof Klawak to see their totem poles.  Unfortunately, the master carvers weren’t in town and as is local custom, our guide, Mike Peratrovich, wasn’t a professional but rather a local willing to share some of his culture and show us the Totem Park where by next summer there will be 21 replicas of 40-foot totems adorned with painted ravens, bald eagles,  frogs, and  bears.

The experience wasn’t what many had hoped for, especially since the carvers weren’t on hand. But that’s the thing about expeditions like this—or all travel really. You have to be willing to accept the disappointments along the way. I’m convinced that makes the high points even better.

And we did get a glimpse into a culture where elders are always right and even in the 1970s there were no phones or TV and the power went off at 10 p.m.

We came back to the ship for a stupendous lunch—homemade pea soup, Caesar salad, grilled fish and the best double-chocolate cookies I’ve ever eaten…and then the whales, as we hugged the West Coast of Prince of Wales Island heading north.

Not another ship in sight.

Another plus: the ship is equipped to handle kids—gearing activities to them when necessary—and those with special challenges like Kirsty Digger, a nursing professor who walks with braces or uses a wheel chair.

This trip, there are only four kids on board, the youngest 12. They’re not having any trouble entertaining themselves.

What every adventure should be about.