The new One World Observatory in New York – breathtaking 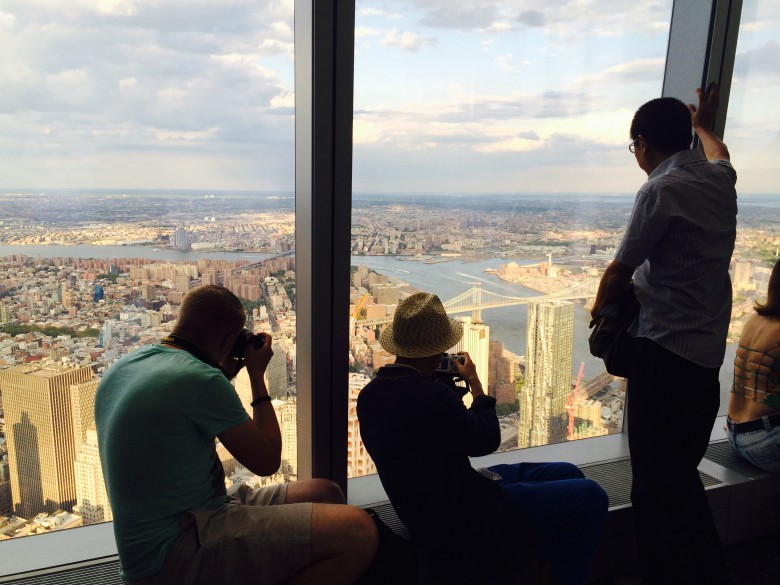 View from One World Observatory

“It’s like you are on top of the world you’re so high,” said Aman Gaudani,  from Oakbridge, NJ who was taking in the view from the newly opened One World Observatory, atop the tallest building in the Western Hemisphere.

One World Observatory is located at One World Trade Center a few steps from the 9/11 Memorial Museum.

“I wasn’t born when 9/11 happened and I wonder what it would have been like to be here then,” said Kaela Keim, 11, visiting with her family from Wichita, KS.  “Coming here really makes you think.”

“It’s an important place to come and to care about,” said Stryker Wood, 12, visiting with his family from Blackfoot, Idaho.

The 9/11 Museum is not an easy place to visit.  Here’s what I wrote about a visit last winter with a group of teens who were guided by the museum’s special teen ambassadors.  The exhibits bring you face to  face with the destruction—mangled fire trucks and ambulances, for example—and with the  2,753 victims in New York, 184 at the Pentagon and 40 people on Flight 93 that crashed in Pennsylvania  that horrible day.  There are portraits, spoken remembrances and mementoes contributed by family members.

There are exhibits with personal reflections from survivors and haunting photographs.  Outside, of course, the Memorial Park surrounds two huge reflecting pools set within the footprints of what had been the North and South Towers. They each feature 30-foot waterfalls, the largest man-made waterfalls in North America and the names of the people who were killed in the 9/11 attacks in New York, at the Pentagon and on Flight 93, as well as the 1993 bombing at the World Trade Center are etched in Bronze. They are placed in groups—firefighters, police, work colleagues, friends and relatives.

Visitors reverently run their fingers across the carved names. When the Oakley family recently visited from England, they searched for names of victims who were from there and discovered a person who lived just 10 miles from their home.  “This happened to all of us, not just to New Yorkers, “ said Henry Oakley, 15.

“I think kids should go and see it,” Henry said. “It’s important.”

But the family, like others here, were glad to end their day on a positive note at the top of One World Observatory, a symbol of how resilient and strong New Yorkers are.  It’s expensive, Joy Oakley agreed ($32 for adults, $26 for kids 6-12, $30 for seniors and free for kids five and under) but worth the price of admission, which incidentally is the same as the Empire State Building.

“I was quite emotional when I saw the view,” Joy Oakley admitted.

When you enter, a large world map highlights the hometowns of visitors using geo-positional data relayed in real time from ticket scans. The Observatory opened  May 29 and by early August, there had already been more than 616,000 visitors with over 10,000 from outside the United States just in August.  No wonder you hear so many languages spoken.

In fact, the I-Pads you can rent for $15 offer information in eight languages through which you can zoom in on the buildings and landmarks you see to get information about them.

When you first enter, the Voices exhibit tells the personal stories of the men and women who built One World Trade Center and the challenges they faced after Hurricane Sandy.

The Sky Pod elevators whisk you to the 102nd floor in 47 seconds as immersive, floor-to-ceiling technology recreates the development of New York City’s skyline from the 1500s to today.  There are nearly 35,000 objects.  “It was kind of scary,” admitted Aaran Guadani, 9.  “My ears popped!”

At the top, City Pulse allows guests to connect with the landmarks as concierges ask what they are most interested in.  Kids loved jumping on the Sky Portal, a 14-foot wide circular disc that offers hi-def footage of the streets below.

But the real show stopper is the view–over 50,000 buildings, eight bridges and three states.   “I could see where I live in New Jersey,” said Dhriti Mahajan, 8, who lives in Jersey City.

Kids  and adults alike were busy taking selfies in front of the floor-to-ceiling windows.

“It makes you realize how small you are and how big the world is,” said Christina Manzo, 15, from  New York City.