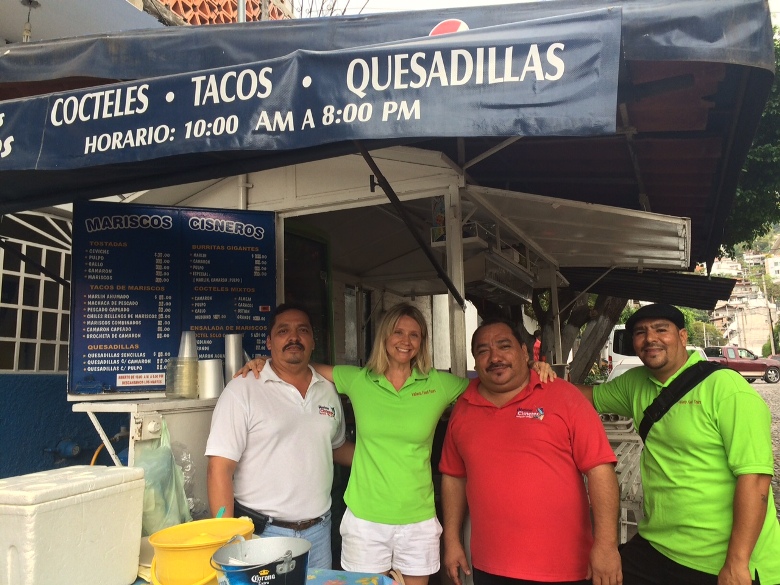 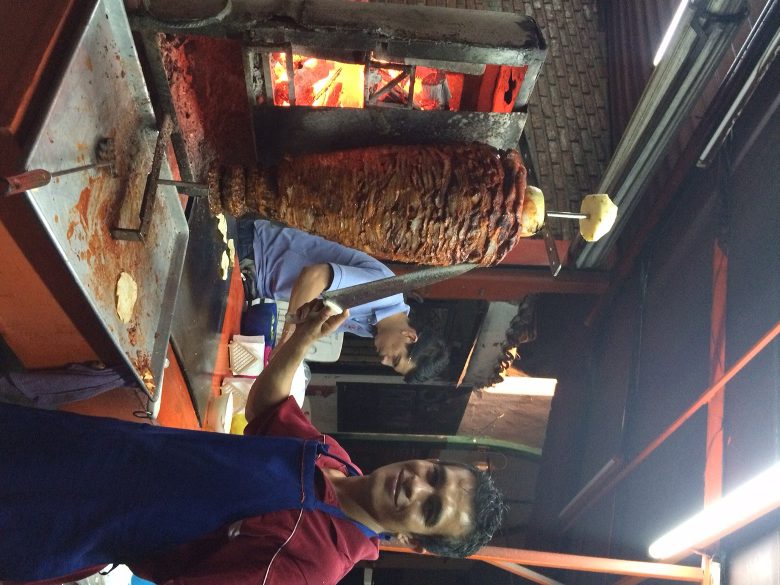 On the Taco Tour in Puerto Vallarta

Who knew tacos aren’t typically served with crispy stand-up tortillas or smothered in cheese or that a freshly made tortilla topped with some specially prepared meat could taste so delicious?

Ricardo Lopez—they call him LOBO–is our guide on a Vallarta Food Tour, which is a company started by American Lindsay Prime.

We never would have found these stands on our own—some in the same family for nearly a half century. We walk through the Emiliano Zapato and 5 de Diciembre Neighborhoods, not far from Puerto Vallarta’s famous boardwalk along the ocean and the historic Our Lady of Guadalupe Church, where an evening mass is going on.  Because it is Sunday night, locals have gathered in the square for dancing; families with young kids are catching up on park benches. 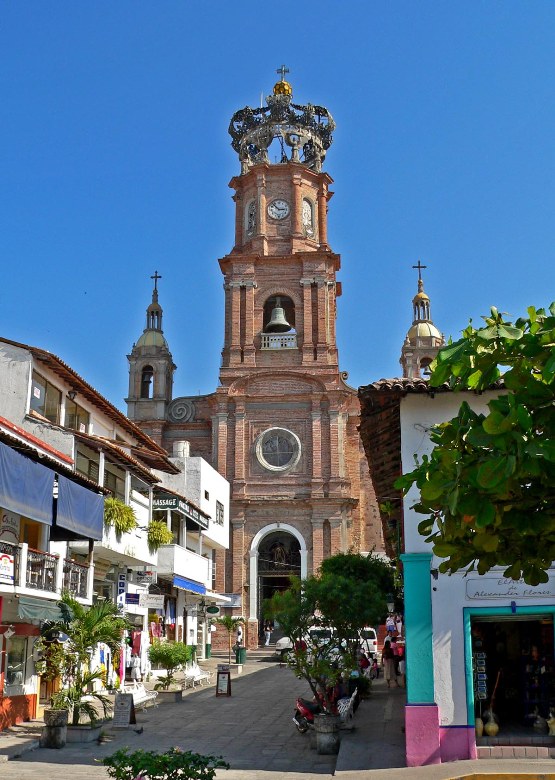 Our Lady of Guadalupe Puerto Vallarta

Ricky and Mario Cisneros started with just a taco stand 18 hears ago—we sample their stuffed jalapeno with shrimp, fish and octopus that is fried in a beer batter and then put on a fresh soft corn taco. This place became so popular that they converted the home behind them to a 12-table restaurant where locals are watching a soccer match as they eat.

I ask Lobo how kids do on this tour—there are others offered during the day. “We’re amazed how many like it and try everything,” he says, adding that food tours now are flourishing all over Mexico as in other places as visitors see local food as a wonderful way to introduce their families to a new culture. 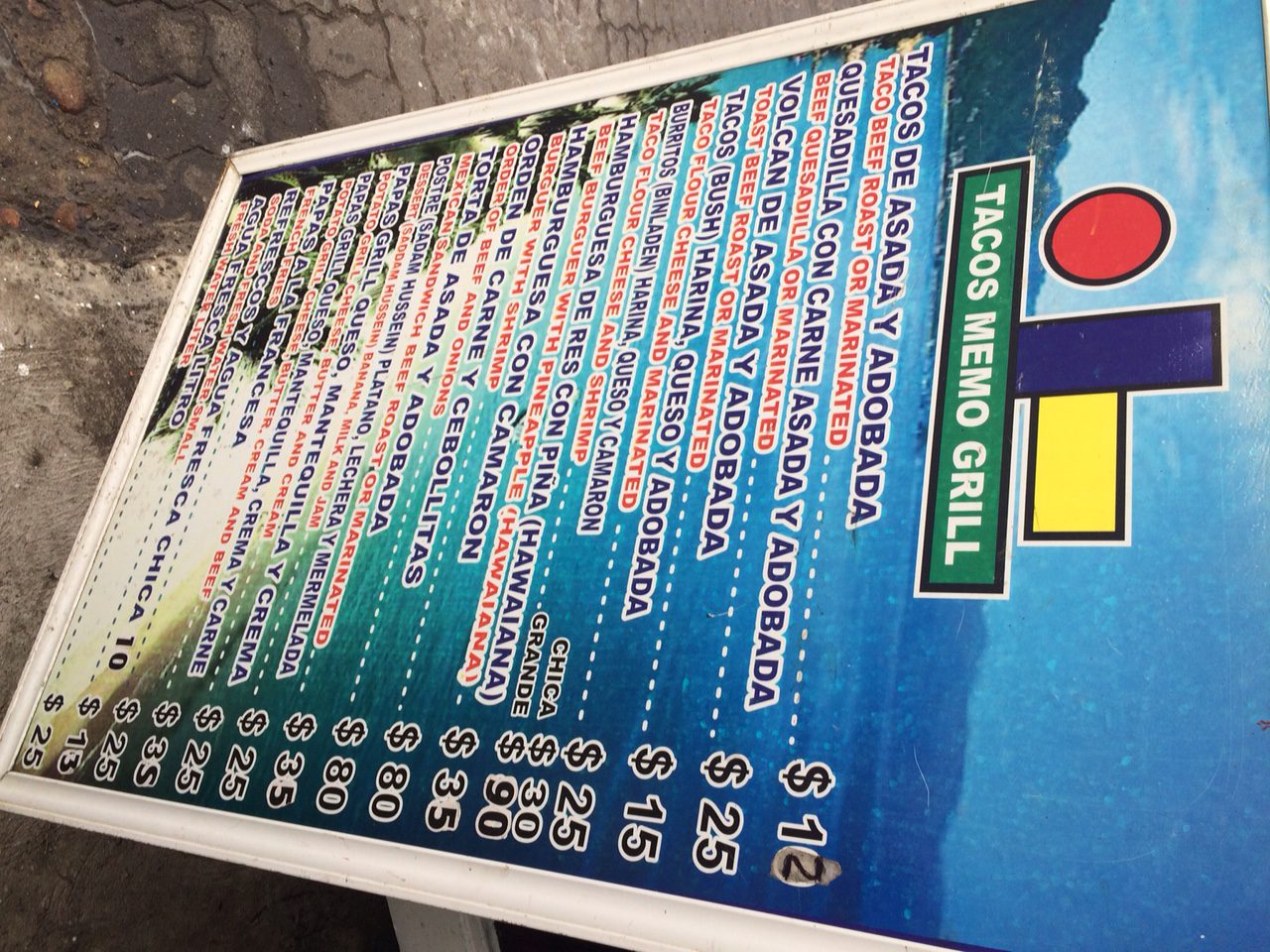 Menu at a taco stand in Puerto Vallarta

Ready for a volcano?  We’re at Tacos Memo where Memo and Maria Carmen have been dishing up tacos for 29 years. Tonight, their son Luis, 14, is manning the grill.  The signature taco we savor here is called the volcano because it makes you think of an erupting volcano—a toasted tortilla topped with steak, cheese, cilantro, cabbage and sauce—did I mention it costs less than $2?

How about Beef head? Honestly, I’ve never tasted anything as tender as the beef cheek taco served up by 27 year old Sergio Carillo, now manning the stand his grandparents started 48 years ago.  “This is a great business,” Lobo said. But it requires a lot of hard work.

How about a fresh churro? They are only about as long as your index finger, made from donut dough, fried in front of us, covered in cinnamon sugar and served up in a bag—made only from 6-10 pm at Julio’s Churros  (corner of Uruguay and Peru Streets).

We sample tamales and Atole, a hot corn pudding, that a woman is selling to those leaving the church and then head to one of Puerto Vallerta’s most popular stands– El Carboncito (on Honduras Street) for Tacos al Pastor.  These are made from succulent pork that is roasted vertically (similar to Greek gyros) after being seasoned and sweetened with pineapple.  In one night, this stand will sell over 450 tacos made from 60 pounds of pork.  This is the place locals come for a taco that costs less than a dollar.  Of course the meat is too good to stop at one….

Just in case we still have room, there is Pozole to sample—a pork hominy stew at a Mexican version of a diner and even though it is near 10 p.m., the place is crowded with families at Restaurant Lolitas (on the Avenue Mexico). I’m so full I can only eat a few bites but I know I’ll be thinking about this stew the next time I’m eating leftovers.

We end the evening, our toes in the sand, sipping Mexican Mescal and listening to the lapping waves at a place called Barracuda.

Yes all of these stands are clean and the food is safe to eat. Yes we felt totally safe on the streets, locals smiling at us. Honestly, this is a highlight of our visit. As much fun as are all-inclusives, it’s a shame if visitors don’t venture out.

I’ll never look at a taco the same way again.