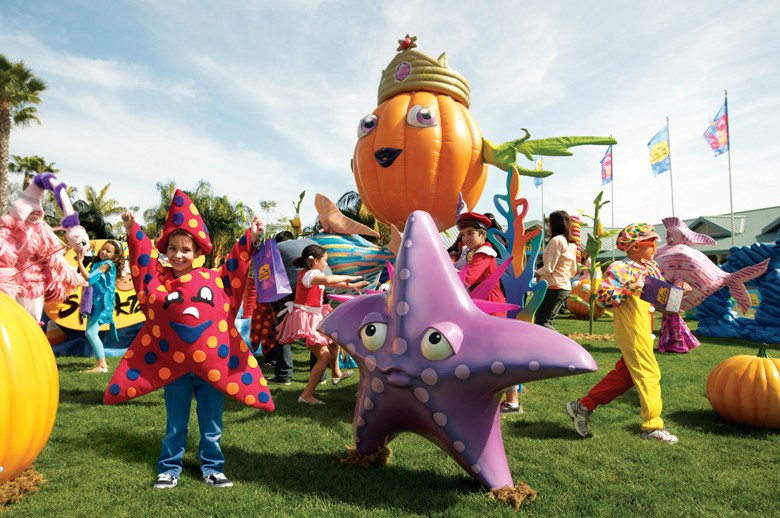 No, I’m not a little early, though Halloween is nearly a month away. That’s because everyone from hotels to theme park (kids get in free to SeaWorld San Diego’s Spooktacular as part of the city’s Kids Free October that grants free admission) to attractions all over the city) to campgrounds to museums (the Children’s Museum of Indianapolis’ Haunted House is a much-loved tradition) now have special Halloween doings that typically go on all month long.

In fact, the 220-member Haunted Attraction Association actually designated Sept. 12 as the kick-off to Haunt Season, with many attractions keeping their doors open through mid-October whether you head to the Wisconsin Fear Grounds in Waukesha, just outside Milwaukee, the Scare Farm in Hillsborough, N.J., outside of New York or the Haunted Cavern in Chattanooga, Tenn.

Pennsylvania alone has 15 Haunts; the Midwest at least a dozen. Maybe this is the year to dust off your witch’s hat a little early and keep it handy post-Halloween. Added plus: Some of these fun and games might encourage your teens and tweens to voluntarily spend an evening or a weekend with you. If not, invite a friend or two along and their attitude will quickly change.

Trivago‘s hotel search allows users to compare hotel prices with just a few clicks from over 200 booking sites for more than 700,000 hotels worldwide. More than 80 million travelers use the hotel comparison. Each month Trivago’s Hotel price index spots trends like:

–          Fall Foliage on a Budget? Consider Niagara Falls, Canada. At just $101/night, you can enjoy the falls and foliage at bargain rates! (full price breakdown HERE)

How about rafting or zip-lining against the backdrop of gorgeous fall colors? You can do that at ACE Adventure Resort in Minden, West Virginia, which happens to be featuring Nightmare on the Gorge the second two weekends in October, which includes a haunted trail, night zip-lining and a zombie run. With over 1,500 acres, the resort promises there are plenty of hidden corners for creatures to hide.

Maybe a haunted cornfield is more your gang’s speed. You’ll find one outside Chicago at Odyssey Fun Farm. Find more Halloween ideas you might not have known about in the Taking the Kids Fall Family Getaways section.

This year Colonial Williamsburg is getting in on the action with the chance to spend a night in a “haunted” colonial house and culminating with the Halloween Weekend “Blackbeard’s Revenge” festival complete with historic buildings flooded in blood-red light while Blackbeard’s crew — they were tried and convicted on Williamsburg’s streets in 1719 — return to take their revenge. And if that doesn’t scare your teens enough, there’s also Busch Garden’s How-O-Scream nearby.

Got kids of different ages? Many places, including Colonial Williamsburg, will offer not-so-spooky fun for younger kids and then switch gears at night. Check out Knott’s Berry Farm in Southern California, for example, with Knott’s Spooky Farm during the weekend days and Scary Farm at night, which boasts “the most haunting” Halloween experience in Southern California with 11 haunted attractions and more than 1,000 monsters. (I wonder what those at Universal Hollywood Horror Nights would say to that claim.)

The International Association of Amusement Parks and Attractions has reported that Halloween has become ever more important for theme parks, as well as museums, aquariums and other venues. Perhaps it’s a function of not feeling it’s safe for kids or even tweens to go out trick or treating on their own. Maybe more adults simply want to share in the fun. Maybe it’s just smart marketing in that long stretch we all have to endure between Labor Day and Thanksgiving.

Every Great Wolf Lodge throughout North America has Howl-O-Ween activities scheduled the entire month of October, which are included in your stay whether you are in Williamsburg, Va., Grapevine, Texas, the Wisconsin Dells or any of their other properties. Think a daily Halloween parade, weekend Monster Bash Dance Party and a Howl-O-Ween house.

KOA Campgrounds are getting into the Halloween spirit with Spooktacular weekends from Northern California to New England and plenty of campgrounds in between, each putting their own spin on Halloween (how about a Wags to Witches Halloween Pet Parade?).

Just don’t expect your tweens and teens to turn off their devices at the campground. They’ll want to share the Halloween action with their friends in real time.

Look for events at museums, aquariums and zoos like Hoots and Howls at the Kansas City Zoo in Kansas City, the new ZooBoo Kids at Tampa’s Lowry Park Zoo and Graveyard Smash designed for young visitors at Atlanta’s Georgia Aquarium. The new Crayola Experience in Orlando has Monster Mania all through October for young artists with special “monsterific” crafts.

The same with those I’ve met at Universal Orlando’s Horror Nights, which incidentally is celebrating its 25th anniversary.

Just be forewarned that as young kids may be scared of even the friendliest witches and ghosts, tweens and even teens might find some of these fright fests not to their liking. No matter what you’ve paid to take them to that theme park or haunted house, don’t make a big deal about it if they want to head home early.