To an Exotic Place That Loves Kids! 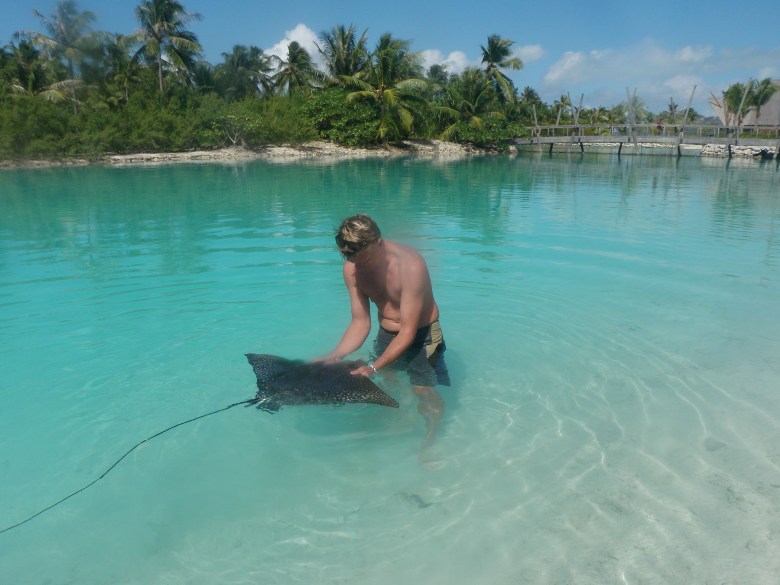 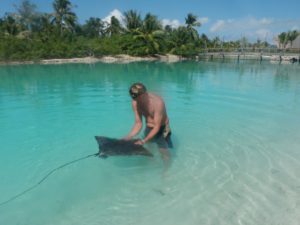 I made friends with Crush!

We’re diving in an area called Muri Muri, just north of Bora Bora, and nearly as soon as we get in the water, our dive master, Benoit Gratas, introduces us to a Hawksbill Sea Turtle — like Crush, a character in Pixar’s “Finding Nemo” — and shows us how to feed him a piece of sea sponge by hand — 70 feet under water. He’s so big — more than two feet in diameter — and all around us are yellow and silver, black and gold, striped and dotted puffer fish, barracuda, triggerfish, black tip reef sharks and even a lemon shark. I expect Nemo to come swimming by any minute.
On the Bathy’s Divers boat (www.bathys-diving.com) we meet honeymooners from Atlanta and Greece, as well as Stephanie Caron, 21, and Clayton Caron, 15, whose dad had brought them back to a place he’d loved 30 years ago. The Carons are as excited about the underwater world as we are. Brazilian Carlos Stevenson is celebrating his 10th anniversary with his wife and 5-year-old son. Stevenson said they decided to bring young William because they love seeing his excitement. “Every day is a party for him.”

Who says kids and romance don’t go together? Even in a place as famous for honeymoons as Bora Bora (www.tahiti-tourisme.com), families’ rule, especially as Air Tahiti Nui (www.airtahitinui.com) continues to offer kids free deals on flights. There are also great hotel deals. The St. Regis Resort Bora Bora (http://www.starwoodhotels.com/stregis/property/overview/index.html?propertyID=1743), for example, has an expansive kids’ club. And we had an awesome family trip sailing on a catamaran for a week with Tahiti Yacht Charters (www.tahitiyachtcharter.com).

The Four Seasons Bora Bora (http://www.fourseasons.com/borabora/), which opened a little over a year ago, deserves high marks for seamlessly meshing the needs of 21st-century families and those seeking romantic getaways. In some cases, the honeymooning couples are parents too. Don McClure, a Canadian, and Nihan Preslier, who is Turkish, got married here on the beach with 5-year-old Antoine Preslier taking part in the festivities. “It’s been great,” said the bride. “It really works.”

The Four Seasons’ over-the-water thatched bungalows — suites with foldout couches, swimming decks and outdoor showers are as perfect for a family as they are for couples. The kids will love watching “fishies” swim beneath the floor’s glass panels. Another plus to these spacious bungalows: “I don’t have to worry about the kids making noise and bothering somebody below us or next door,” says Tammy Darnell, here from L.A. with her husband, 3-year-old son and 7-year-old daughter.

Let’s not forget the free kids club (no $75 fees here) where kids can do everything from learn Tahitian dances to play on the water playground outside where fountains spray the kids as they jump around.

Sure, you say, the Four Seasons can do all this because they’re so expensive (look for packages that offer free nights or extra amenities). I’ve been to a lot of fancy resorts that say they roll out the red carpet for families, but they don’t really, and I’ve been to a lot of budget spots that do a terrific job. This place does it right and it has nothing to do with the thread count on the sheets. Those that are competing for family vacation dollars might take a page from the Four Seasons playbook.

There’s even a spanking new Teen Beach area — a first for Four Seasons, says marketing manager Don Schreifels, with lounges overlooking the lagoon, a pool table inside and an air-conditioned recreation room offering foosball, computer games, Wii and more. The only thing missing is a fridge with some soft drinks and snacks. The resort has just initiated a teen spa, too. (Vanilla massage or teen facial perhaps?)

How many places do you know that have a resident marine biologist available to teach you and your kids about the ocean? The Four Seasons’ Oliver Martin has laboriously grafted underwater coral (they look like little pots of herbs) in the resort’s inner lagoon, which already has 100 species of fish. He believes this Four Season project is the largest in French Polynesia — another effort that sets the Four Seasons apart, especially as a family destination.

“We want children to see how we impact the environment. The whole idea is to develop this as a bio center where children and parents can snorkel, learn about sea life and the environment,” says Martin.

By the end of the year, Martin hopes, there will be a touch pool for younger children. Martin also plans to graft coral underneath the bungalows so that guests can see more sea life when snorkeling right from their rooms.

Coral, he explains, grows as much as 10 inches a year. “We want the children to understand what they see.”

Stick around, Martin adds, and you will see things you never realized were there — octopus mating, angelfish, clown fish (Nemo, finally!) parrotfish and hermit crab.

“Every day is different,” he promises.

(Read Eileen’s Tahiti travel diary elsewhere on this site and also follow “taking the kids” on Twitter, where Eileen Ogintz welcomes your questions and comments.)