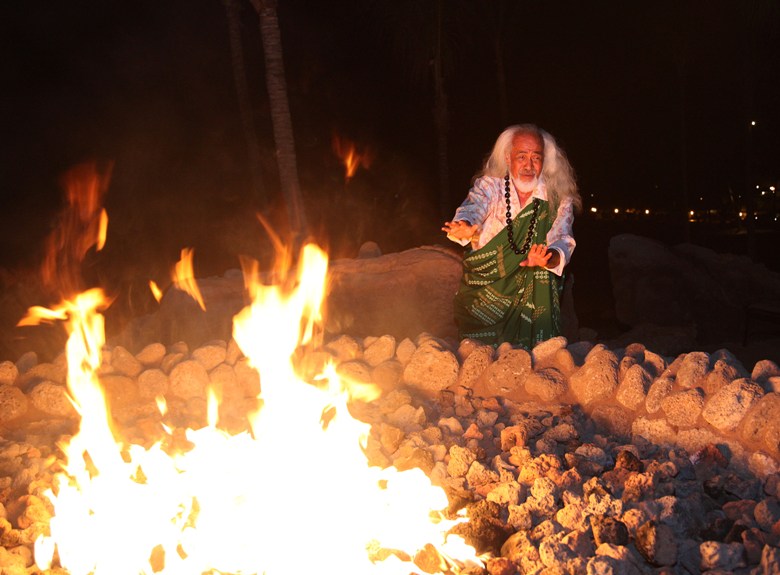 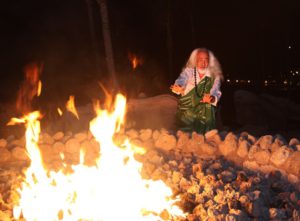 Storyteller spinning his yarn at the Aulani's fire pit

Got your coconut shell ready?

“Aunty,” who is actually well-known Hawaiian entertainer Sonya Mendez, leads the giggling gaggle of kids on a “Coconut Walk,” marching, singing and clapping coconut shell instruments together around the outdoor patio at Aulani, Disney’s newest resort and its first in Hawaii.

“This is a place where children will leave with a sense of place,” she says approvingly.

That’s the idea, of course. Disney employed more than 100 local consultants to advise them on everything from storytelling to music to architecture. Local fish and produce are served at the resort restaurants and children can learn to snorkel with Hawaiian fish in the artificial Rainbow Reef. Family spa treatments teach visitors how to use the traditional healing lomilomi sticks at the Laniwai Spa. (Laniwai means freshwater heaven in Hawaiian.)

It may just be possible that here, about an hour from Waikiki on a pristine lagoon along the coast of Oahu in Ko Olina, Disney has built a game-changer for vacationing families, as well as for themselves, and in the process encourages families to come to Hawaii for the first time.

Rather than showcasing their own stories, said Joe Rhode, the senior Disney executive responsible for the creative content and design at Aulani, “we built this resort around the story of Hawaii. It’s like a book about Hawaii and you are inside the story!”

At first, locals said, many were skeptical about Disney’s promises to showcase Hawaiian culture. They wondered if Disney intended ultimately to build a theme park here. “But now that Aulani is open, most have been impressed with the respect Disney has shown to the host culture of Hawaii,” said Hiilani Shibata of the venerable Bishop Museum, Hawaii’s state museum of culture. “Disney made a great effort in authenticity,” she added.

The more than 800 “cast members” were chosen, in part, by how well they could communicate their personal Hawaiian stories. They were then given additional Hawaiian cultural training. “It isn’t make-believe here,” insists Djuan Rivers, who oversees operations at the resort and who took Hawaiian language lessons when he first arrived. “It’s from the heart.”

But just as important for visitors — or maybe more important — Disney has taken what works so well for families on its cruise ships, its escorted Adventures by Disney tours and Disney Vacation Club condos (this is the first Disney hotel to offer both traditional rooms and condo options) and brought them all together, complete with beautiful locale, extensive pool complex and a terrific interactive water play area called Menehune Bridge.

“It is like we took the cruise line off the water and put it on land,” suggested Tom Staggs, the chairman of Disney Parks and Resorts and himself the father of three young sons who have all given the resort — and the unique “family suite” at the spa — a thumbs up.

Each day, like on a cruise ship, there are more than 20 mostly complimentary activities pulled from a roster of 40 that families can pick and choose — making Space Goo with Stitch, feeding the fish in the Rainbow Reef lagoon, surf lessons for teens, learning a Hawaiian craft, taking in a movie under the stars or in Uncle’s study at Aunty’s Beach House where it “magically” begins raining and thundering, even when the sun is shining outside. (Like on a ship, you get a daily handout — here called an “IWA” — that tells you everything that’s going on that day for the entire family.)

And like on a ship, but unlike most comparable resorts (rates start here at $399/night), Aunty’s Beach House with morning-till-evening activities for kids 3 to 12 is complimentary, as is the separate Painted Sky teen hangout and spa area where teens can post to their Facebook accounts or mix a special Hawaiian body polish or face masque.

And unlike other resorts’ expensive luaus (where few like the food and the entertainment goes on too long for kids) there is no dinner and no charge for the Aulani Starlit Hui, the signature evening show, which starts with local artisans demonstrating their crafts and showcases local musicians (including the prize-winning Ukulele duo Heart and Soul) and dancers during a 25-minute performance that ends with a Disney Dance Party with Disney characters. The focus is contemporary Hawaiian, not hackneyed Polynesian.

Disney also gets what parents and grandparents know: Families don’t need — or want — to be in lockstep on vacation. In fact, to create more of those I-can’t-believe-we’re-here moments Disney is so famous for, parents and kids get the opportunity here to easily get away from each other — whether at the spa, at a surf lesson or at an area designed for 21st-century teens, or their younger siblings (think touch-table computer games or Xbox Yoga for teens) as well as to share experiences.

“That is amazing, said Kerry McNaulll, whose 9-year-old daughter Grace happily spent the evening at Aunty’s while her parents celebrated their anniversary with an adult dinner.

Families also need the chance to explore what Oahu has to offer — and it offers a lot — minus the stress. That’s why Adventures by Disney is also offering individual and three-day excursion packages with unique activities. (Try cooking lessons with a local celebrity chef, hiking along a hidden trail or sea kayaking — all complete with local stories.)

The resort is also more Hawaiian than Disney, though there are plenty of opportunities to hug Minnie and pose for pictures with Goofy, who are all decked out in Hawaiian finery. Aulani boasts one of the finest collections of contemporary Hawaiian art anywhere; Aunty’s Beach House — the children’s standout activity center — is modeled after a traditional Hawaiian bungalow complete with ukuleles on the shelves, Uncle’s workshop and surfboards stacked unobtrusively in the backyard along with the playground equipment.

Carved Menehune, the mysterious little people who live in the forest, are “hidden” throughout the resort — guests can follow the Menehune Adventure Trail — while hundreds of local sea creatures are unobtrusively carved into the landscaped rocks.

There is also the Sunset Gathering (the Po La’ila’l) where guests come together with “Uncle” to offer an original chant or for the Fireside Storytelling (Mo’oleolo) accompanied by ukulele tunes, all of it free.

“What people expect from Disney is Magic,” said Rhode. “But you have to remember that Hawaii has its own magic.”

For more on Eileen’s visit to Aulani, read her Travel Diaries