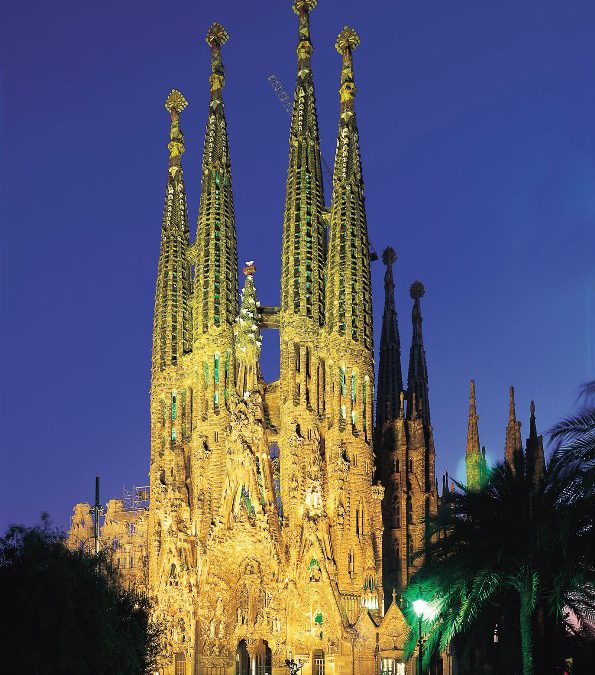 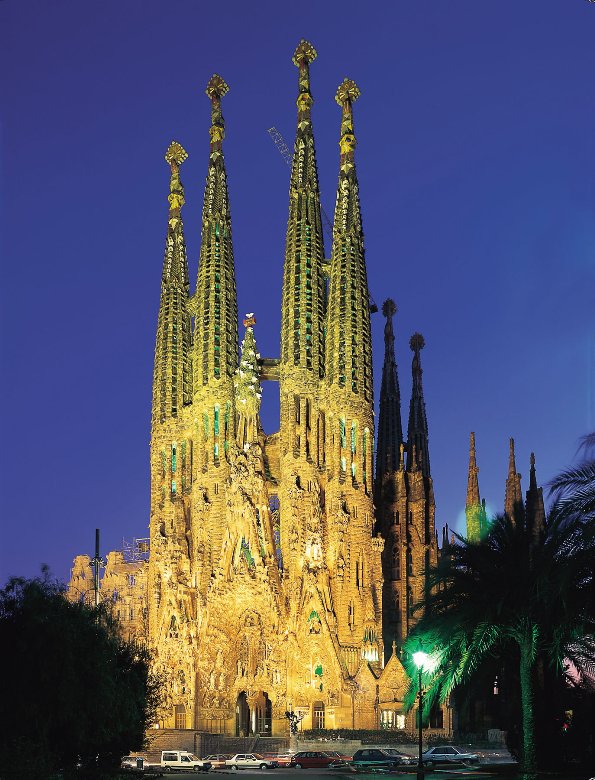 We don’t know where to look first.

The massive pillars, looking like tree trunks, stone chameleons, tortoises and turtles, help support the columns. The sheer size of the place is amazing. Some of the towers soar more than 500 feet. Even jaded teens, like my 13-year-old niece, Erica Fieldman, can’t help but be impressed.

Welcome to Antonin Gaudi’s unfinished masterpiece, the Sagrada Familia, www.sagradafamilia.org , Barcelona’s most famous site and Spain’s most visited. More than 40 years after the eccentric and revered architect’s death – he was struck by a tram – work still continues on the huge church first begun in 1882. Some 2.5 million people visited last year.

This is a great place to engage the kids in a scavenger hunt. (Find the fruit carved on top of the towers, the young stone musicians, the birds.) There are two completed facades — one represents the birth of Jesus, the other the Passion of Christ. (If you look closely, you’ll see Gaudi’s face.)

It’s amazing that the project continued after anarchists burned Gaudi’s studio, along with the plans for the church, during the Spanish Civil War. Luckily, Gaudi had made plaster models of the church (we see them in the museum at the site) and though they were also smashed, his supporters were able to painstakingly put them back together so the work could continue. Gaudi, so obsessed at the end of his with completing the church, slept on a bed in his workshop. He is buried in the church’s crypt. I want to go to the top (you take an elevator, but walk down the stairs), but I think Erica has had enough. Sometimes, you have to know when to call it quits, even at incredible sites like this one. I tell myself Erica will come back some day and remember how she couldn’t decide whether she was bored or fascinated.

Park Guell garden complex, designed to be a housing development, was Gaudi’s largest work in Barcelona. It’s a garden city with fantastically shaped roofs, a house that looks as if it’s made out of candy, and the famous serpentine bench made out of broken mosaic. Unfortunately, no one in Barcelona gravitated toward the idea. The only three houses built were for Gaudi, the developer and the developer’s lawyer. I’d live there in a minute for the spectacular views of Barcelona.

We all love the giant mosaic dragon. “Cool,” Erica says. Sometimes when trying to show kids new cities, you can’t hope for more than that.

Barcelona, home to the 1992 Summer Olympics, is one city that appeals to kids (especially teens) and parents. In recent years, it’s become a favorite of American families who board cruise ships here in summer – as we did last year. If you plan to do a lot of touring, get the Barcelona card (www.barcelonaturisme.com), which includes free public transportation, museum admissions, restaurant discounts and more. There are some 10,000 restaurants in Barcelona and 35,000 shops. (Did you know more than 20 percent of all spending in Spain takes place here? Visit www.spain info.) And with such friendly locals, there’s no better place for the kids to practice their Spanish. (Starting this spring, American Airlines (www.aa.com) will fly nonstop from New York to Barcelona.

Walk off your jet lag by taking in all the chic couples walking along the beach, the city’s famous art nouveau architecture, the art, (Picasso lived here as a teen), the ancient Gothic Quarter and the street entertainers along the mile-long Las Ramblas. Ever see a human flower statue? A bird market? I never saw so many different kinds of gummies than at the famous Boqueria food market, said to be the largest in Europe. It’s been here for centuries.

The kids will give a thumbs up to Montjuic, one of Barcelona’s largest recreation areas, which rises nearly 700 feet above the south side of the city. We’re holing up overnight at the Hotel Arts Barcelona (www.hotelartsbarcelona.com), a Ritz Carlton, a famous icon of the Barcelona skyline and a short walk from the beach and many of the city sites. There’s nothing like a luxury hotel when you are jet lagged. The place is packed with families, even on the concierge level where parents and kids indulge in free breakfasts, snacks and drinks. Another highlight is the secluded pool area next to the distinctive shadow of the Frank Gehry fish sculpture.

But before we hit the pool — or fall asleep — a little culture is in order.

MY PICK: Museu Picasso (http://www.museupicasso.bcn.es/eng/index_eng.htm). It’s housed in three spectacular stone mansions in the historic quarter of the city and showcases works from the artist’s early years, his Blue Period and early works from Barcelona. Picasso moved here in 1895 at the age of 14 and donated some 2,500 art pieces to the museums in 1970. (Show your young artists what he did as a kid!)

That night, after we hit the pool, we head to Bestial (http://www.bestialdeltragaluz.com/), which the hotel concierge told us is a “hip” gathering spot for locals. I didn’t really see evidence of that, but, after all, we were there at 8:30, early by Barcelona standards. Even Erica agreed the food was great, especially the wood-fired pizza.

Donkey or Bull, our amiable guide Bernard Liso asks the next morning. The bull, of course, is the national symbol of Spain. The donkey is the symbol of the Catalans. We learn that people in Barcelona speak Catalan as well as Spanish and there’s a fierce matter of national pride. From its earliest days, Barcelona has been linked to France, thus the emphasis here on Catalan — Catalonia lies midway between France and Spain.

I’m determined to have Paella for lunch. We are in Barcelona after all. Paella, of course, is the famous Spanish rice dish that’s usually topped with chicken, sausage and shellfish. We head to a small restaurant in the old historic quarter of the city, Los Caracoles. I’m completely charmed by the mosaics and the open kitchen, the way the rooms of the restaurant wind up around an old staircase. Erica unfortunately isn’t.

“I just won’t eat,” says Erica, after perusing the menu. There’s no pasta and she doesn’t want anything else. We dig into our paella. Erica agrees to taste it, as long as I take the shells off the shrimp. Not bad, she says, helping herself to more rice. I just sip my sangria and don’t say a word. A few months later, Erica tells me she’s already decided where she wants to go abroad when she’s in college — Barcelona.