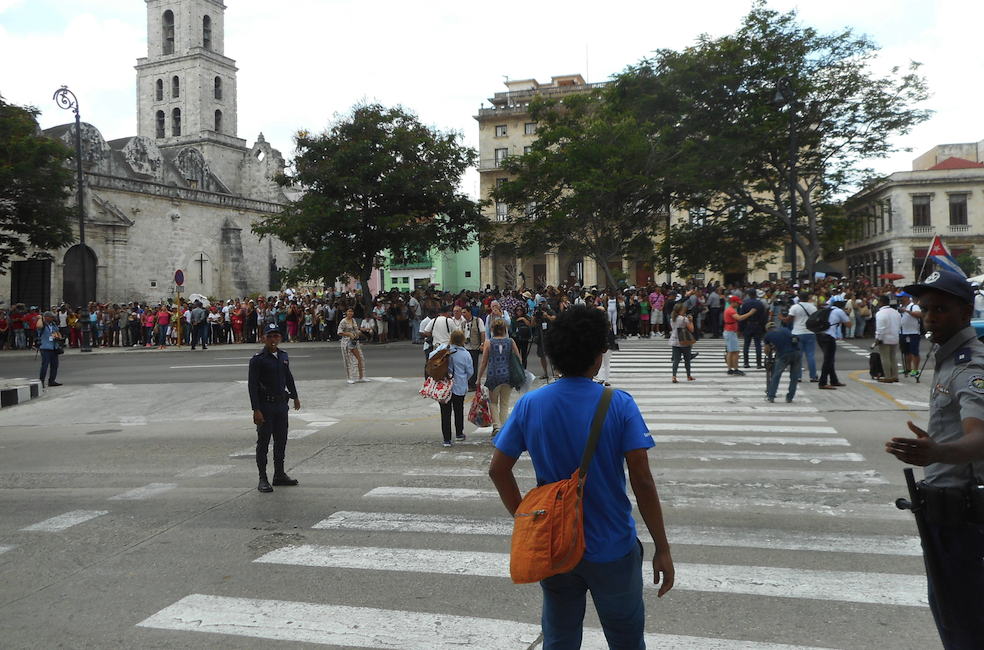 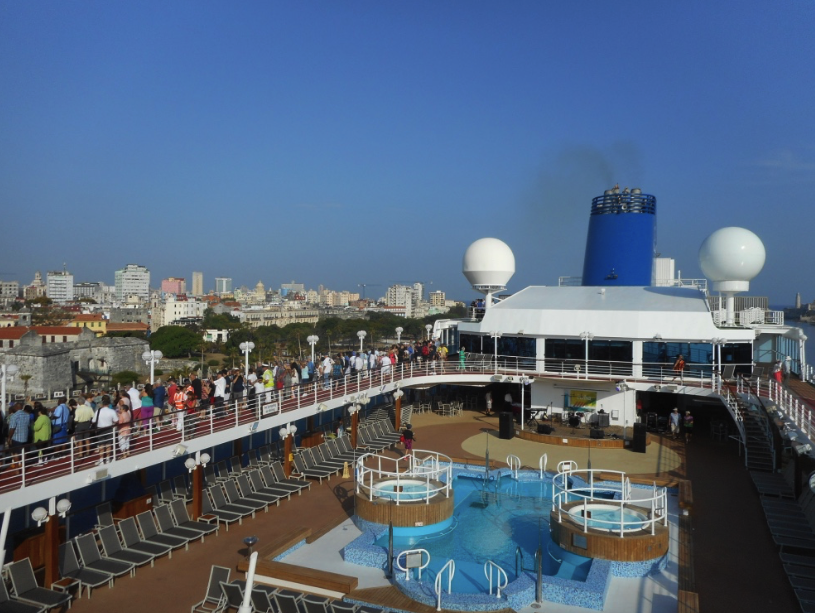 Tyson Russell, 10, his younger sister Lucy, 8, and a gaggle of cousins were the first American kids to step off an American ship in Cuba in nearly 60 years.

All the more so because hundreds of Cubans were lining the shore cheering and waving as the 700-passenger Adonia sailed in to Havana harbor, passengers on board waving back, being greeted on shore with high fives and hugs. “I didn’t expect that,” Noah Russell, 15, said. “It made me feel really good.”

That was true for all of the passengers aboard Adonia, the first ship in a new Carnival brand devoted to immersive and impactful travel. There were 16 Cuban-born Americans on board, some returning for the first time, some who work for Carnival Corporation, all hoping to see homes they left as young children or babies. Cuba just last week agreed to permit Cuban born Americans to travel here by boat. “This is the best thing we can do to break down barriers, to bring people together,” said Carnival Corporation President and CEO Arnold Donald, who was onboard for the historic arrival.

For Tyson’ and Lucy Russell’s mom Tara Russell, that her children, mom, extended family, including her niece and nephews, can share this experience is the best Mother’s Day gift of her life. “I’m living my dream this week,” she said. Russell is the president of Carnival’s new brand Fathom and has spearheaded this new cruise concept that focuses on voluntourism in the Dominican Republic and immersive experiences to Cuba. The hope is to encourage younger, non cruisers–especially families—on board for a different, more immersive vacation experience.

I’ve learned first hand that encouraging kids to be global citizens, to be comfortable outside their own comfort zones, helps them navigate unfamiliar and difficult turf in their lives as they grow up.

That Russell’s kids and husband were able to join her on the inaugural Dominican and Cuban cruises and see how fully engaged they have been in the programming she has worked so hard to develop, not only underscores what she is trying to accomplish with this new brand but personally “is such a gift,” she said. “Crazy good!”

Certainly the Cuba programming is a work in progress. As required by the United States, Americans traveling to Cuba must participate in eight hours of approved “people-to-people” experiences daily (that doesn’t leave much time for Cuba’s beautiful beaches). Some P-to-P programs are excellent, others need work.

The advantage of traveling on Fathom, passengers agree, is that all of the logistics are arranged for you–including the required P-to-P experiences–in a country still struggling with a tourism infrastructure. There are few enough hotels, poor roads, difficulties renting a car, little Wi-Fi. “I’m really not a cruise person,” said Sandeep Rao, a physician from Texas in his 30s traveling with his wife Swathi and clutching a Lonely Planet Cuba guide. “But Cuba seemed daunting. I knew on a trip like this everything would be taken care of.”

One day in Havana, for example, the Raos were in my group as we met with the manager of a private—as opposed to government-owned—restaurant. He was very proud that Guy Fiori will be featuring El Figaro in an upcoming segment of his hit show Diners, Drive-Ins and Dives on the food channel. “That Americans are coming is good for everyone,” Johnny Blanco said, as he served up delicious lobster tail, beans and rice for under $15 in the charming tiny restaurant. 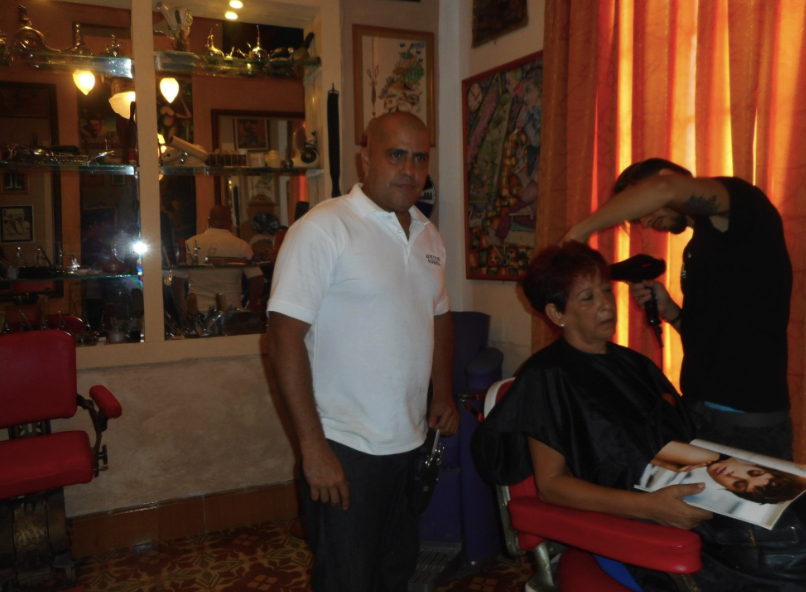 Gilberto Valladaros Reina, who everyone calls “Papito,” has his own private hair salon (and museum) up a steep flight of steps a few doors away from El Figaro on what is known as “Barber’s Alley.” He was among the first in Cuba to get a license for a private business some 16 years ago in his home and has been instrumental in forming ArteCorte, a community organization that has helped other businesses start along the street as well. They have also organized projects for school children, a free hairdressing and bartender school for young adults, a senior center that feeds 150 for 10 cents a day and a free playground themed to hairdressing (think a giant blow drier climbing scape).

Today, Papito’s shop is bustling and has turned into a museum and art gallery devoted to the history of barbershops and hairdressing. He’s thrilled to see Americans coming, and for the opportunities this P-to-P program offers. “The most important tourism product we have is our people,” he said through an interpreter. That Cuban and American children can meet is especially important, he believes.

It is a significant feat that Fathom can move 700 people through tours that fulfill the P-to-P requirements, visiting different community projects and historic sites like the historic Cathedral of San Cristobal of Havana (a favorite of the kids because they could climb to the top of the bell tower), small restaurants and museums. The National Art Museum) was a spectacular representation of Cuban culture through art but if we not had a knowledgeable guide I wouldn’t have appreciated what we were privileged to see.

If you don’t want to participate, even on board, you can do the paperwork to complete the P-to-P requirements on your own, assuming you can arrange the interaction. Fathom’s Rosa Maria Caballero, a Cuban-American who developed the ship’s P-to-P program in Cuba said, she hopes there will be soon workshops with dancers, musicians, perhaps a cooking class or one that focuses on Havana’s Jewish history as well as some better designed for families.

It isn’t difficult, particularly if you speak Spanish to interact with the Cubans as they couldn’t be more friendly and eager for anything from candy to pens. You should feel safe bringing the kids here.

The Adonia is not a big ship (the Havana dock can’t accommodate anything bigger yet). It has only has a minuscule pool, no waterslide or kids club, no casino and the that internet is spotty. That doesn’t seem to faze anyone on board in the least, especially not the kids.

“I’m most excited that we’re going to be the first Americans to sail in here in so many years,” said Jack McHargue, 13. “My friends think it’s cool that I’m here.”

“We’re having too much fun,” added Tyson Russell.

“Children are the future,” Papito the Barber said. “We want to see enterprise between the United States and Cuba. “We are very different cultures,” he continued, as today’s children get to know each other and focus on their similarities rather than their differences, “they can tighten the bonds between us.” 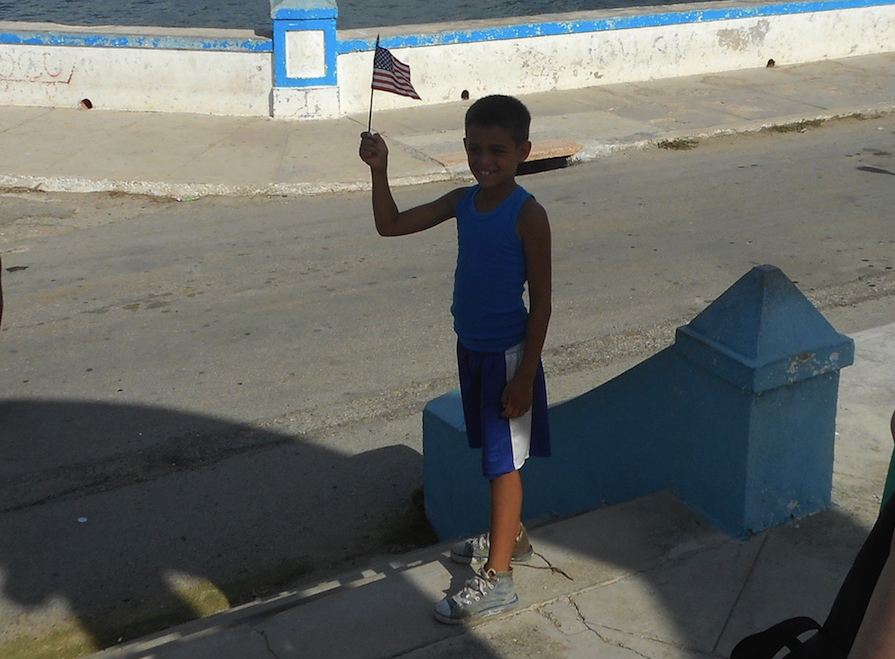 (For more on the Cuba adventure, please read Eileen’s extensive Travel Diaries on this site.