To the Smithsonian National Museum of African-American History & Culture 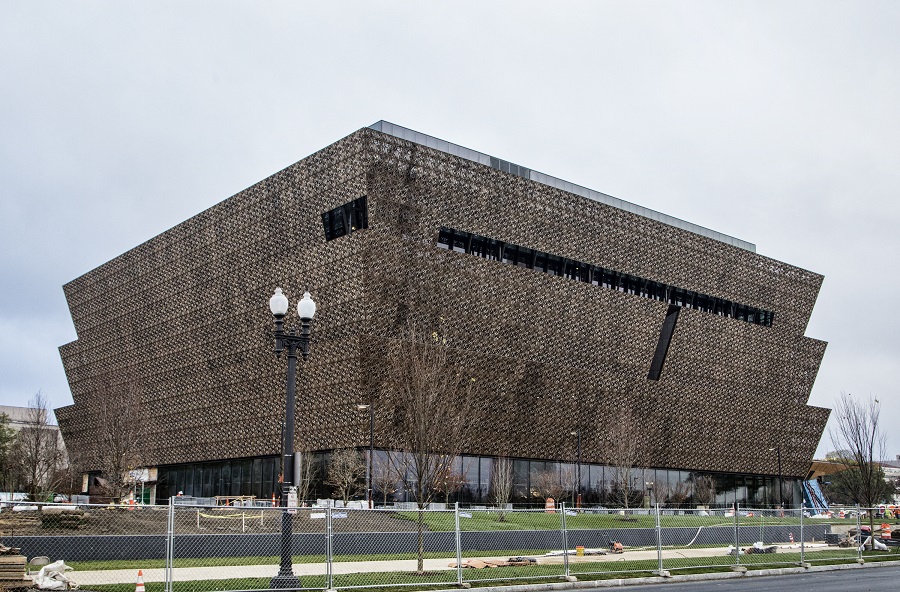 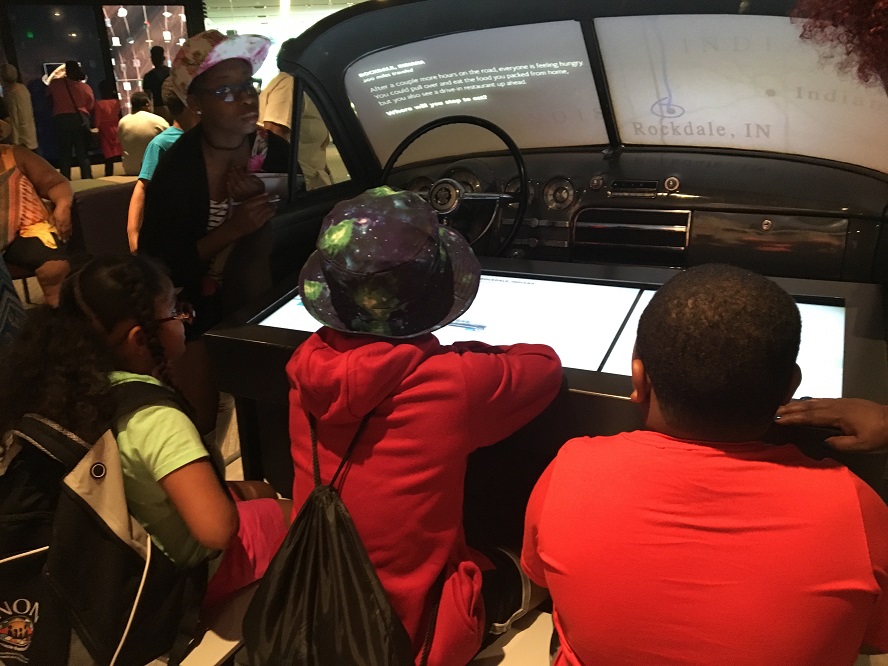 Kids take a “drive” at the National Museum of African American History and Culture, but must choose the right road to take

Ready to take a spin?

Kids were lining up for the chance to “drive” the shiny green convertible At the National Museum of African American History and Culture (NMAAHC), but what they didn’t realize was that their ride would be a meaningful teaching tool about the era of segregation in the United States. While on their “drive,” kids are given cues and asked to make choices as to which way they should go. They’re also faced with potential consequences should they choose the wrong road.

“Much better than a classroom,” suggested a retired teacher from Brooklyn visiting with a 7 year old.

The car is a centerpiece exhibit in “Explore More! Gallery” at the NMAAHC’s interactive, technologically driven space that also included an interactive lunch counter to learn about the civil rights sit-ins and a chance to join a virtual step show.

Since the museum opened Sept. 24, 2016 on the National Mall, next to the Washington Monument, nearly 3 million people have visited the 12 inaugural exhibitions featuring more than 3,000 artifacts, including slave shackles, Harriet Tubman’s hymnal, a segregated Southern Railway used in the Jim Crow-era South, Chuck Berry’s red Cadillac and costumes from “The Wiz.” During its inaugural year, the museum increased the number of items in its permanent collection to nearly 40,000 and hosted more than 40 public programs to help visitors better understand the historic and cultural issues impacting us today.

The museum is celebrating its birthday big time with special Community Day celebrations (and extended hours the weekend of Sept 23-24), as well as a social media campaign — join the conversation at (HASHTAG)VisitorVoices.

You will have lots of company. The NMAAHC, which is nearly 400,000 square feet, has become the nation’s largest and most comprehensive destination for exploring and displaying the African-American story. According to Destination DC, it’s the hottest ticket in town.

(Admission is free but to guarantee admission, you will want to reserve timed passes. These passes, reserved in advanced, are offered on a monthly basis, so, for example, those released on Oct. 4 will be for January 2018. There is also a limited number of same-day online passes released starting at 6:30 a.m. and walk-up passes at 1p.m. weekdays on the Madison Drive side of the building.)

Washington, D.C., is a great bet with kids because there are so many free museums and historical sites literally on every corner, including the African American Heritage Trail, offering more than 200 sites, the pandas at the Smithsonian’s National Zoo or a visit to your congressman’s office. (Find a lot more ideas in the new edition of my Kid’s Guide to Washington, D.C. ) On Oct. 12, Phase 1 of The Wharf opens with 15 restaurants and three hotels, all within walking distance of the National Mall. The Wharf is a $2 billion

renovation of DC’s southwest waterfront with lots of space for families to play.

But any visit to Washington, D.C., and especially a huge museum like the National Museum of African American History and Culture, may require some prep work for parents, museum educators suggest. Certainly a visit here provides the opportunity to have conversations with children about tolerance, as well as equality, inclusion and fairness.

Use the museum’s collection of objects and stories — whether it is Harriet Tubman’s shawl to talk about a woman who embodied courage or learning about integration through the life of Jackie Robinson, the first African-American baseball player in the major leagues — to help children explore how people, often ordinary everyday people, have made choices in history to stand up to injustice.

Depending on the age of the children, entry points in the conversation will vary, but all children can understand fairness, inclusion and the opportunity every individual has to make the world a better place.

You can’t expect to cover this entire museum in one go with kids. Make sure everyone is well rested and wearing comfortable shoes. Eat before you go — there are lots of food trucks outside.

Also make sure to take a digital tour before you visit — download the NMAAHC Mobile APP to help you navigate the museum, discover stories from the exhibitions and decide where to focus your attention. Do the kids want to head to the History Galleries, which cover 600 years of history in three exhibits, “Slavery and Freedom,” “the Era of Segregation” and “A Changing America”?

(Be forewarned, these exhibits can be tough going with younger kids and even with older ones. They will require parental interaction.) Museum educators suggest you ask questions along the way and help the kids to make a personal connection. Objects, they say, can provide powerful entry points to begin conversations about what otherwise would be abstract concepts about history. The museum’s education department is in the process of developing resources for families that should be available next year.

If the kids are interested in sports, head to the “Leveling the Playing Field” exhibit where you will learn how sports became one of the earliest public arenas to accept African Americans on terms of relative equality.

If they like music, go to the Musical Crossroads exhibit and see how African-American musical creativity has transformed music forms from blues to rock and roll. The kids will love Chuck Berry’s red Eldorado!

“Double Victory: The African-American Military Experience” is a good bet to help kids understand not only the contributions African Americans have made throughout American history (check out all the Medal of Honor winners), but their desire to prove their patriotism, despite a segregated military.

“The kids have a different level of understanding,” said one Maryland mom visiting with two young grade-schoolers. “But they each are learning something new here.”

And that’s the point, of course.